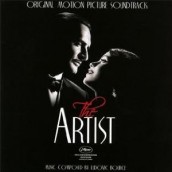 When it comes to talking about retro scores, you can’t go back any further then the days when there was no music at all – at least when it came to the complete lack of soundtrack on celluloid nitrate was all about the herky-jerky picture. Such were the glory days of silent movies, when music had to do all of the talking. Whether it was a pianist desperately improvising away, or a full orchestra keeping time with reams of rapidly changing melodies, the 1920’s were truly the time when film scoring was king. The fact that so little of these soundtracks survived to our digital era says much about the downfall of films whose acting, and scoring was overly dramatic to say the least- lest of all the tragic end that ensued for actors who were stopped deader than a 1929 stock certificate when their vocals didn’t cut the Vitaphone chops.

While such a fate befalls the Gallic voice, and career of THE ARTIST, his musical mood’s far peppier in the hands of French composer Ludovic Bource. This soon-to-be known musician got his start creating the spot-on 007’isms of “Artist” creator Michel Hazanavicius’ two, brilliant OSS 117  spy send-ups CAIRO, NEST OF SPIES and LOST IN RIO (for which Bource also managed a brilliant Bernard Herrmann NORTH BY NORTHWEST homage). Given the even more formidable task of going from spy spoof stylings to filling up an optical track that’s nearly devoid of sound effects (something even John Morris had in more abundance with his wondrous score for SILENT MOVIE), Bource rises to “THE ARTIST’s challenge with melodic panache.

Given a heart-on-its sleeve film without a nasty bone in its black and white body, Bource pours on the charm in spades. Better yet, Hazanavicius has given the Hollywood-set ARTIST  a distinctly French, emotion-based humor that’s far more relaxed than it is frenetic, allowing Bource to write a silent comedy soundtrack that doesn’t sound like he’s scoring a Keystone Cops cartoon (that one distinction goes to the fun, mock-peril of his accompaniment for the opening film-within-a-film “A Russian Affair”). THE ARTIST‘s other 23 tracks (spread over a copious 78 minutes) function more as mini-suites. And while it would have been nice if Bource had more thematic consistency to tie them together, THE ARTIST is right in tune the emotional notes it seeks to hit.

Set in the tuxedoed heyday when champagne and star-hungry crowds flowed, Bource starts “The Artist” with a bubbly jazz effervescence. Silent idol “George Valentin” gets a soft-shoe swagger, a sound perfectly in synch with the always-winning devil-may-care charisma of actor Jean Dujardin. The swinging spirits of Cole Porter, George Gershwin (and even a tropical Django Reindhardt) are palpable in the lush orchestra that captures Valentin’s seemingly never-ending life of leisure and adoration. Bource also manages clever, static-y recordings for the make-believe standards of “Imagination” and “Jubilee Stomp.” When it comes to the real period deal, a subtly futzed redo of the title tune from 1936’s PENNIES FROM HEAVEN makes an apt choice for the only vocal song in “The Artist” as Valentin’s world comes to an end.

Valentin’s once lowly admirer and love object will become his guardian angel, taking THE ARTIST on a trajectory somewhere between “A Star Is Born” and “Singing in the Rain.” It’s a somewhat romantically uncertain relationship that takes the film smack into the kind of near-tragic pathos that Charlie Chaplin mined so brilliantly, and Bource proves mostly adept at making the music simultaneously poignant and light-hearted. Tender pianos, subtly dramatic strings and intimate violins abet the film in creating real, feeling characters from its stylized approach, while also recalling such early film music masters as Erich Wolfgang Korngold and Miklos Rozsa.

It’s only the raging cues “L’Ombre Des Flammes” and “”Ghosts From the Past” are too self-consciously over-the-top (as are the film’s sequences themselves). Bource’s music goes from nicely matching the overall naturalism into the kind of gesticulating, silent movie hamminess that THE ARTIST surprisingly avoids satirizing itself. Perhaps it’s this need for a more subtle approach to THE ARTIST’s purposefully melodramatic finale that made Hazanavicius replace Bource’s own powerful “Suicide” cue with Herrmann’s famed “Scene d’Amour” from VERTIGO, which to be fair is like having Mozart come in to do your big scene. And thankfully, Bource doesn’t have to compete with the maestro of dark romance on the album, allowing his own voice to shine for the cue’s suspenseful race against time   to its happily predictable ending.

The same can be said for the overall, wondrous effect of Bource’s  ARTIST an appreciation enhanced when hearing this score fully free of picture. If there’s a triumph in his swooningly melodic, yet mostly unfussy work, it’s that Bource will lead your imagination straight back to the era that some say represent the halcyon days of Hollywood. The musical affection that makes THE ARTIST a sweet movie-movie delight will likely make you agree with that opinion.