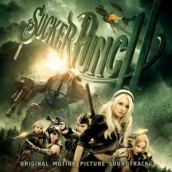 Music has always been a driving force for Zack Snyder’s gloriously insane, slo-mo’d visual style and now it’s a fabulous female fighting force of the mind that transforms a standard collection of pop-rock-alt. hits into something as gloriously insane, and powerful as a giant sword-swinging samurai.

It’s doubtful if the Eurythmics, Bjork, Grace Slick or The Beatles could imagine any slight cobwebs on their work being dunked into a blazingly cool remix firebath. What emerges from the transformed likes of “Sweet Dreams (Are Made of This),” “Army of Me” and “White Rabbit” are mini rock operas with a new, electrifying vitality that’s perfect for the comic geek grllpower audience to thrash to.

If there’s a MOULIN ROUGE feel to the mashes at hand (many nicely sung by star Emily Browning), then it’s no surprise that movie’s song producer Marius de Vries is in the house mix to do a similar jaw-dropping job here. Armageddon means “I Want It All” over Queen’s “We Will Rock You,” while “White Rabbit” and “Tomorrow Never Knows” become even more sensually psychedelic.

What takes these already knockout remixes into a whole other stratosphere is how Snyder’s composer Tyler Bates (DAWN OF THE DEAD, WATCHMEN) transforms the songs’ rhythms into the original score, then swings right back to their familiar melodies. The result is right in tune with how these psycho ward sisters are transformed into superheroes- an approach that takes familiar songs and blasts them into completely new, superhero-energized entities in a great, WTF rave-remix way.