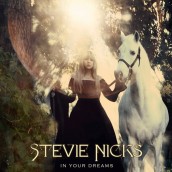 One of the most fascinating aspects about singer-songwriter Stevie Nicks is how she not has masterfully managed to be both a co-frontperson for the band Fleetwood Mac and also have an equally successful solo career, with each sounding unique unto themselves.

Her work with Mac and former lover/partner/bandmate Lindsey Buckingham was seeped in emotional angst, music that was a pop/rock hybrid elevated by Buckingam’s skills as a guitarist and sometimes producer for the band. Her solo stuff leaned more in the rock arena. It was always Nicks at its heart, but she always seem to write a certain way with Mac (“Dreams,” “Rhiannon,” “Gypsy,” etc.) than when she was going solo with tracks like “Edge of Seventeen,” “Talk To Me” and “Stand Back.”

It’s been ten years since her last solo effort TROUBLE IN SHANGRI-LA and eight since the last Mac release SAY YOU WILL and the time in between has definitely given her space to fashion a bold, and vibrant new album IN YOUR DREAMS.

Paired up with former Eurythmics guru Dave Stewart as producer and occasional co-songwriter, Nicks has found a way of making a forward-thinking album while still sounding eternally Nicks.

If SHANGRI-LA embraced more of her rock side, IN YOUR DREAMS is more pop. And while the pairing with Stewart may make you think the new release is drenched in ‘80s-styled synths, that couldn’t be further from the truth.

Stewart, like her pairings with Buckingham and even members of Tom Petty’s The Heartbreakers (who were all over her first two solo albums, and help out here), brings a completely new texture to her sounds.

With “Secret Love,” Nicks delivers a timeless angst-riddled song about forbidden love. It’s a great kick-off to the disc and segues into another forbidden love song, the acoustically-driven  “For What It’s Worth” co-written with Heartbreaker Mike Campbell.

While Nicks has managed to keep her Mac past separate, IN YOUR DREAMS finds both Lindsey Buckingham and drummer Mick Fleetwood guesting on many tracks and bringing, no surprise, a Mac vibe. “Wild Sargasso Sea” definitely benefits from Buckingham’s guitar flourishes, but it’s “Soldier’s Angel” that feels as if it’s directly ripped from a ‘70s era Mac album. Buckingham’s sparse guitar and harmony vocals and Nicks lyrics bring to mind RUMOURS-era “The Chain.” It’s a great song and one of the disc’s best.

Nicks gets back to her usual spiritual self with the tracks “New Orleans” and “Moonlight (A Vampire’s Dream” both name-checking vampires in popular culture. “New Orleans” brings up Anne Rice and vampires, while “Moonlight” is written in response to TWILIGHT. Two songs in this vein is a bit overkill, but only Nicks can make it work as well as she does.

Nicks pulls out her bluesy card with late-album cuts “Ghosts Are Gone” and “You May Be The One.” This is a side that we’ve never really seen Nicks expose of herself and it’s a reminder that her raspy pop vocals are perfect for this barroom swagger. “You May Be The One” is the stronger song as she talks about more heartbreak.

The album closes with “Cheaper Than Free” written with Stewart who also duets and harmonizes with her on it. It’s another experiment for Nicks, having a feel of the strong, stripped down ballads Eurythmics favored during the end of their pop run.

While in the past, Nicks may have seemed like she was trying too hard both vocally and musically, here she seems positively relaxed. Her vocals are in great shape, her rasp never getting the best of her and her focus absolutely pitch-perfect.

Still, IN YOUR DREAMS is not a perfect album. Omit two songs, and it may have come close, but that’s not the point. The point here is that Nicks has found a way to be both current and herself. The disc isn’t overproduced like some of her prior solo efforts (the dreadful THE OTHER SIDE OF THE MIRROR) and she clearly is striving for new musical territory to stretch as an artist and add an even richer palette to her already superb catalog of songs.