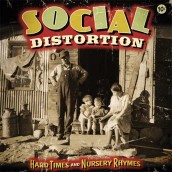 On “California (Hustle and Flow)”, the thunderous second track of Social Distortion’s excellent new 11-track album HARD TIMES AND NURSERY RHYMES, Mike Ness sings “Well I went too fast with that rhythm and booze/almost ended up dead like all those other fools/everyone’s got some sorta ball and chain/what’s life without a little pain?”

We should be grateful that Ness’s own addictions didn’t lead him down the tragic path of many of his long-lost peers, otherwise we wouldn’t have been blessed by the band’s continual growth as performers. It also kicks off a hard-hitting and affecting group of songs that find Social D maturing in many ways, while still hitting autobiographical moments like the above track.

While Social D is closely identified with SoCal’s punk music scene and have been going strong for nearly 30 years (despite long waits in between albums), HARD TIMES AND NURSERY RHYMES find the group in a particularly rockin’ mood. Some of it feels like the Southern California version of the Southern-fried rock showcased by the Black Crowes and Lynyrd Skynyrd (particularly on “California”). There’s even a bit of a Rolling Stones vibe thrown in for good measure on the track “Can’t Take It With You” with the soulful female vocals chanting in the background.

Yet, everything is still filtered through Ness’s unique perspective and gruff vocals (usually layered for optimum affect).  Yes, it’s much poppier than their last release from 2004 SEX, LOVE AND ROCK ‘N’ ROLL, but the band hasn’t neutered themselves either. Instead, they’ve just found a way to reinvent their sound.

Whatsmore, there isn’t a single lackluster track in the bunch. My favorite tracks change from day to day, but “Diamond in the Rough” I’ve found to rise to the top. It’s a story of someone “dirty” and “damaged” who “needs a little love” and it just blasts through the stereo with radio play urgency.

Then there’s “Gimme the Sweet and Lowdown” about someone who’s been down in the dumps and survived tragedy trying to help someone else  headed toward the darkness. I’m also partial to “Bakersfield,” an epic tome about being stranded in a town, no one should ever be trapped in.

The album is book ended by the strong instrumental “Zombie Road” and concludes with the rockin’ anthem “Still Alive” which features an atypical (for the group), but rather affecting piano accompaniment. This constant shake-up of their trademark sound with a mixture of new instruments and textures is what makes the lyrics in this track also resonate as Ness says, “I’m still alive and I will survive.”

HARD TIMES AND NURSERY RHYMES confirms that Ness has indeed survived and made his band even more relevant than before. It’s incredible they can still blow out stereo speakers with their raw angst, and while this may be a bit too commercial for fans who hold up their debut 1983 disc MOMMY’S LITTLE MONSTER in high esteem, you also can’t deny how great they sound some 30 years in.

This is good stuff. Great stuff even. One of the year’s best, and we’re only halfway through January.

Special Note: For one week only, iTunes is offering up a free download of “California (Hustle and Flow”) – download it now. The special edition of HARD TIMES AND NURSERY RHYMES on iTunes also features three additional bonus tracks which are much softer than the rest of the standard album, but are just as catchy and complimentary to an already superb disc.