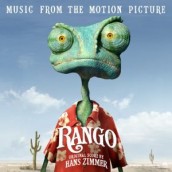 Hans Zimmer's got the Morricone lizard in him

After scoring 2-D critters in the African savannah, under the sea and bounding about the tropics of Madagascar, Hans Zimmer takes a three dimensional trip South of the Border to come up with his most delightfully hip soundtrack yet for funny animals- in this case the pistol packing cold bloods and carrion who inhabit the range of RANGO.

Applying the same in-your-face zest that gave a major shot of new musical life to the warhorse of SHERLOCK HOLMES, Zimmer has his way with the old west’s movie music clichés, infusing the shoot-out trumpets, electric guitars, player pianos and every other Morricone-ism you’d expect with brash, nutty energy- and that’s not even counting his bat-riding prairie deconstruction of “Ride of the Valkyries.” It’s an energy that’s consistently clever as opposed to being just smart-assed, More importantly, its immediately recognizable music just might serve as a gateway drug for kids to discover the joy of Ennio that Zimmer conveys in enthusiastically silly spades here.

RANGO’s songs are in equal cahoots to this album’s enjoyment as they unravel the story of its ill-fated lizard, mariachi-style balladeering that gives the music a particularly cool sense of black-humored storytelling (complete with the word “bordello” thrown in). Credit Green Car Motel singer Rick Garcia, music editor stalwart-turned songwriter Ken Karman, and the legendary Mexican band Los Lobos, who turn the strumming theme tune into a surf rock arrangement, complete with the trumpeting of Arturo Sandoval to make RANGO the BLAZING SADDLES of the toon score animal kingdom.