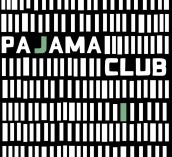 Fans of CROWDED HOUSE may be a bit surprised at the new side project by co-founder Neil Finn. The singer-songwriter, who has made a fine career out of expert pop craftsmanship that has evoked the best of the Beatles at times, tries something completely different with Pajama Club.

Created with his wife Sharon (who shares vocals with him), the album is more synth heavy and totally alternative in sound and feel than Crowded House. The beautiful melodies and harmonies Finn and Crowded House are known for have been replaced by chunkier musicianship and songs that take a few listens before they really grab a hold of you.

The disc kicks off with the simmering “Tell Me What You Want” that slips and slides through a pulsing synth groove while “These Are Conditions” almost feels like a Talking Heads song with its structure and feel.

“From a Friend to a Friend” is the closest sounding to Crowded House, but still fitting more in line with the Pajama Club mission statement. Meanwhile, “Diamonds in Her Eyes” totally feels like post SGT. PEPPER’S LONELY HEARTS CLUB era Beatles (but more synth heavy). It’s experimental, psychedelic and at 5 minutes long, one of the most adventurous songs Pajama Club has to offer (I can only imagine the live groove this thing likely takes on).

Not everything works on the Pajama Club’s debut, but any time Finn puts out something new, it’s worth a listen. It’s a solid effort that shows an artist growing and exploring under different rules and expectations. If you download the iTunes version, you also get a bonus track – a completely new redo of the Crowded House track “Suffer Never”.