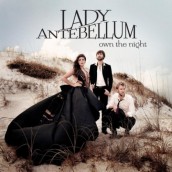 At some point, when pop radio went bland and soulless, country artists started to adapt the hooky stylings that made them appeal to people who missed the good old days.

Shania Twain perhaps paved the way with music that was country in labeling only (she was secretly a pop star, even if steel guitars were playing in the background). She even proved that theory with a two-disc set that had the songs mixed for country radio stations AND rock radio.

Now, many country artists teeter on that thin line and no more blatant is Lady Antebellum. They hit a massive homerun with 2010’s NEED YOU NOW and have already followed it up with another great set of songs with OWN THE NIGHT.

The formula is familiar. There’s nice harmony vocals between singers Charles Kelley and Hillary Scott – but the craftsmanship in the songs is really 1980s pop with a bit of a country kick.

And I love it.

A song like “Friday Night” would not feel out of place on 1980s radio, while “We Owned the Night” is pure perfection.

There are ballads, and midtempo tracks – and there isn’t a clunker in the entire set. The blend of Kelley and Scott is a nice one – which gives each ample time to have solo moments, but it’s their lush harmonies together that really give Lady Antebellum its unique sound and texture.

What’s even more amazing is how this has come out a little less than a year after NEED YOU NOW was released and they’ve returned with an even more refined and polish sounding effort – not juiced by hitmaking songwriters wielding their predictable sound.

No, this is three performers working together – pushing and pulling – creating great country music that the pop world can appreciate and enjoy too.

I’m a big fan of the group and thrilled they’ve had so much success in such a short time, but I’m also enamored with their songwriting abilities. They’re the real deal, and I hope they continue down this path of defying expectations and releasing what they want and when.