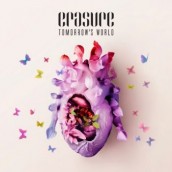 It’s amazing that Vince Clarke has been a part of not one, but three ground-breaking bands and all within the span of five years in the early 1980s.

First, he jump-started Depeche Mode being one of the primary songwriters for that band’s exceptional debut SPEAK & SPELL providing such memorable tracks as “Just Can’t Get Enough”, “Dreaming of Me” and “New Life”

Leaving after the release of that ground-breaking first album, Clarke then formed a partnership with singer Alison Moyet with Yaz (known as Yazoo in the U.K.). The two albums they put out in 1982 and 1983 (UPSTAIRS AT ERIC’S and YOU AND ME BOTH) again provided some of the best 1980s pop around and continued to showcase Clarke’s incredible skills as an electro-pop guru.

Yaz broke up pretty quickly and then Clarke found his final and longest lasting musical partnership with Andy Bell with the formation of Erasure in 1985 which is in its fourth decade of existence and going strong.

The interesting thing about Erasure is how Bell, in many ways, was a similar singer delivering high register notes in the range of Moyet. Yet, Clarke and Bell went even further and found an even bigger mainstream success as Erasure.

The hit songs kept coming from “O L’amour” and “Who Needs Love Like That.”  And the group, like Depeche Mode, they never feared breaking new ground or pushing the limits to their song craftsmanship. They’ve had so many great albums, that when one of their discs didn’t quite live up to the vast riches of the rest of their song catalogue, it’s didn’t ever reflect badly on them either

Thankfully, their latest disc TOMORROW’S WORLD ranks up as their most consistent release since 2000’s LOVEBOAT.

And the weird thing about it, as much as there’s still the blips and bloops of electronics mixed in with the pop-happy hooks, the group actually sounds much more current than it has in the past with their latest release.

Maybe it’s because singers such as Katy Perry and Lady Gaga are so steeped in ‘80s style pop, appropriating it for their own 21st Century devices, that Erasure  doesn’t sound as alien and foreign as it once did to those outside of the alternative music scene.

There are some pretty strong songs here. The opening track “Be With You” is a highly catchy, so is the infectious “Fill You Fire” and lead off “When I Start To (Break It All Down”) – all which sound like songs that could fit snugly on any of their previous releases.

Then you get into “What Will I Say When You’re Gone” and “You’ve Got to Save Me Now” with the disc slamming into overdrive. These are amazingly produced tracks. They feel mature and not overly kitschy as some Erasure tracks can sometimes sneak into. “You’re Got To Save Me Now” even has an electronic gospel tinge feel – something Erasure has never tried and succeeds widely here. This song is a hit single in the making – radio get ready.

“A Whole Lotta Love Run Riot” is one of the weaker tracks – which appropriates a little too much Gaga for its own good.

“Just When I Thought It Was Ending” is a great heartbreak song – with some excellent programming and instrumentation. It’s a shame it’s so buried late in the album. It’s the closing track on all variations on the album – CD and digital download except for the iTunes version.

On iTunes, the band includes an exclusive bonus track “Shot to the Heart” that rounds out the release as a solid 10-track album. In some weird way, they’ve saved one of the best tracks as an Easter egg for die-hard fans to discover. This is an awesome song – more ‘80s era Erasure than anything else on here. And for fans of 80s-era Erasure, they will not be disappointed.

TOMORROW’S WORLD is a great pop album featuring Clarke at the top of his synth programming game and Bell reaching new highs with his vocals. As many 1980s singers have a hard time living up the vocal pyrotechnics of their heyday, Bell sounds absolutely refreshed and at the top of his game. Then again, when you have such a strong group of songs as these – it’s hard not to stay inspired and push everything to the limits.

Click on Link: Review of new Erasure single “When I Start To (Break It All Down)”