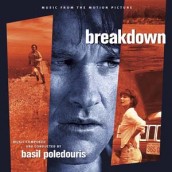 All of Basil Poledouris' tune-ups are on this 3-CD set. But was there a musical breakdown to begin with?

It’s not as if I could talk from the experience of being a film composer, let alone the skill to put two notes together in harmony. But from what I’ve witnessed, the job can be either one of the most elating, or soul-draining gigs on the creative planet. You either run in synch with the filmmaker as you give voice to their vision, or collide head-on when you don’t hear eye-to-eye. The latter’s a bumpy road that Hollywood euphemistically calls “artistic differences” – i.e. not giving a director (who can more often than not be a blistering tyrant) exactly what he musically wants. Even worse is when the director can’t even begin to describe it- though in defense, just try writing about music to see that’s often no easy task.

When a musician doesn’t give the director what he wants, the end result is said composer being given the hook off stage, with no second chances. So while I can’t pretend to say that I know exactly what happened on the musical, and anti-musical road that led to BREAKDOWN, I can definitely state that it was no small showing of Basil Poledouris’ personable professionalism, let alone his perseverance, that allowed him to stay en route with a complete replacement of his own score – a process that resulted in enough music to fill an astonishing three CD’s for La La Land’s more-than-ultimate release of this score. BREAKDOWN’s many permutations were something akin to an urban legend in the soundtrack community. And now that it’s all finally here, the lavish album provides an astonishing window into the kind of arduous journey that doesn’t necessarily lead to a better score, let alone when the director fancies himself a composer as well. But even beyond this, listening to Poledouris’ strikingly melodic score turn into something less ends up being an ironic chronicle of how a whole generation of Hollywood old schoolers would end up becoming red asphalt to filmmakers who increasingly saw traditional scoring as an anathema to the realism they were trying to portray.

All of this isn’t to say that the percussively ambient score that BREAKDOWN ultimately got didn’t help result in an incredibly tense, well-reviewed movie that stands as one of the finer hours in the careers of star Kurt Russell and director Jonathan Mostow. Maybe more actual “music” would have detracted from the ghostly, sampled tones that effectively conveyed the sun-baked desert in which Russell tries to free his wife from a nefarious gang of truck-driving kidnappers.

For as Mark Isham had brilliantly shown a few years before in THE HITCHER, there’s nothing like electronics to capture a deadly game between innocent and killer in the arid middle of nowhere. But where Isham gave his mix of beautiful stillness and frenzied percussion a surreal quality that played into a story just as concerned with its metaphors as its visceral violence, BREAKDOWN was more about gripping suspense than going for art. And for Marvin, that would connote Poledouris giving him a grab bag of piercing tonalities, ticking clock rhythms, and thrashing about the piano and drum sections while ignoring much of his orchestral capability. Electronic strings were certainly no substitute for the real thing. If some of this amateurishly sounds like a guy just basically banging away while simultaneously noodling about, I’d bet that percentage would go to Richard Marvin, Eric Colvin, Steve Foreman and Judd Miller- something you can actually decide for yourself given the composer breakdowns within particular cues- the first factual admission of musical percentages I’ve ever seen of a score with way too many hands on deck. Again, it all works fine in the movie itself, where it’s got to in the first place. But the first disc of BREAKDOWN just isn’t all that interesting. And as such, it’s emblematic of the many, similarly effective suspense movies to follow that confused tension for impersonal, sample-heavy music. It’s scoring that’s more about getting out of the way than anything else.

Yet anyone who’s listened to such masterworks as CONAN, ROBOCOP and RED DAWN can tell you that Basil Poledouris was anything but vanilla, especially when it came to action and suspense. Heck, even the synth-washed HARLEY DAVIDSON AND THE MARLBORO MAN proved as much. So if you’re wondering where that composer might be hiding in the alternately overwhelmed and ambling sonic expanse you just listened to, the real Poledouris stands proudly up in Disc 2. And his first, soon-to-be obliterated score to BREAKDOWN, is the composer in terrific form, right from the Americana-esque main titles. As opposed to a character desperately searching for any trace of humanity, Poledouris’ innate attempt is all about melodic emotion, always making us feel the hero’s loved for his vanished wife that makes us understand exactly why he’s risking life and limb through increasingly perilous situations.

The first BREAKDOWN has a danger that’s big, bold and brash. Better yet, it’s amazingly well constructed as opposed to being just free-flowing eeriness and action beats, with the ten-minute “Route 7 – North” a textbook example of how to keep tension going through swirling, determined orchestrations- its heroic progression bringing to mind the steely, symphonic determination of HUNT FOR RED OCTOBER.

Even simmering pieces like “Heist Explained” use emotional writing as a motor for suspense, with the “The Bank / Bringing Money To Earl” packing the feeling of facing off against truly ominous evil with seemingly simple, and utterly dire orchestral movements. Indeed, Poledouris doing “nothing” here is far more interesting than all of the percussive sound and fury that BREAKDOWN ended up with. The subtlety that Poledouris crafts his themes with here have a real build, packing militaristic power when they finally erupt with a husband’s righteous fury in “Speeding Truck Climb,” then speeding into the chilling rhythms of the climactic freezer discovery, and adrenalin-filled car chase. Even the electronic rhythms that Poledouris seamlessly uses with the orchestra have real meat to them. There’s no apology for all of this being anything less than movie music, as if Poledouris felt he shouldn’t have gone with his first, innately correct instincts. You can only imagine the gut punch at having a score like this tossed. But then, how many composers of Poledouris’ craft have been told by an increasingly anti-musical generation of filmmakers that they were doing “too much” with what only came naturally?

The numerous alternates on Disc 3 of BREAKDOWN show the changes that Poledouris’ full-blooded score went through on its destination to becoming a chassis of itself, a transformation perhaps only slightly less agonizing to the composer than what David Kessler went through in AN AMERICAN WEREWOLF IN LONDON. Yet there’s still plenty of interest on this CD, especially in the appearance of rural guitars and twisted, gurgling synth effects that wouldn’t be out of place in a monster movie (which is more than fitting for J.D. Walsh’ evil trucker turn that ranks with the best screen fiends). Through it all as Poledouris tries to do less and less while signifying something, there’s always the feeling of the composer’s drive to do the best for BREAKDOWN. That his original intention survived, even in its minutest permutation, says more about Poledouris’ own professionalism than in how right, or wrong Jonathan Mostow was to trash what would’ve likely been regarded as one of the composer’s best scores. Thanks to La La Land, that hostage has finally been released.

Even with what surrounds the best of these BREAKDOWNS, this CD set is a must-have for Poledouris fans, as well as a lesson for anyone else in the collaborative process that is film scoring- especially its oft-whittling down of big ideas. But if I’m giving you the impression that this was the creative end for a way too-soon passed composer, BREAKDOWN certainly wasn’t the case, as the composer quickly returned to his lavish approach for STARSHIP TROOPERS, LES MISERABLES and FOR THE LOVE OF THE GAME to ring out the century in high style. Yet at its turn, Basil Poledouris would essentially retire from the Hollywood game, tired of its combat, and increasingly deaf ear to the rich possibilities of melodic, orchestral writing. Doubtlessly, the wreck of BREAKDOWN was the wake-up call. The pleasure on this CD is hearing what he intended before the amorphous alarm sounded.