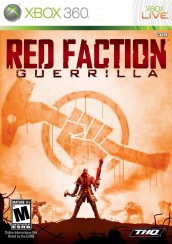 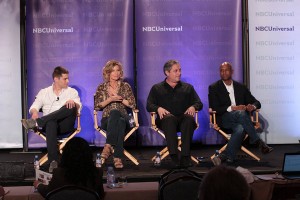 “The movie takes place in between the third game GUERRILLA and [the forthcoming game] RED FACTION: ARMAGEDDON,” says THQ’s Lenny Brown. “What’s cool about this TV piece, you can get deeper and get to know the character through the movie and that’s been exciting for us at THQ.”

RED FACTION: ORIGINS debuts June 4 which is less than a week after the RED FACTION: ARMAGEDDON video game is released and Syfy President of Original Programming Mark Stern says that if things go well, the movie could lead to a regular series.

“The intention was to have this be a potential back door pilot, but also live as a two hour movie,” says Stern. “I wouldn’t mind having this talent on a series. I think what was exciting about us, was the opportunity to do it in a different way that is tied to a game, but could also live on. It takes place at a different place than a game.”

Director Michael Nankin says that what makes ORIGINS different from the game is that the movie couldn’t achieve the scale that the game can due to budget limitations.

“The epic scale of the game doesn’t exist in real life, so we weren’t able to go in that direction,” says Nankin. “Instead, we crafted a much more emotional story.”

That said, Nankin says that adhered to the world that THQ created using certain architecture, skips and guns.

“People are very, very loyal to the game,” says Nankin. “We had to have our own identity as well. We have a different goal than the game –  it’s a movie. We’re telling a story, you’re not participating.”