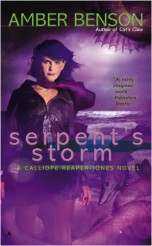 SERPENT’S STORM is the third novel in Amber Benson’s Calliope Reaper-Jones series, which began with DEATH’S DAUGHTER and continued in CAT’S CLAW. While there will reportedly be more books to follow, SERPENT’S STORM feels very much like the conclusion to a trilogy that it in fact is, paying off many elements that were set up in the earlier installments. What’s really gratifying here is that as our heroine Callie has grown and matured, so has her ability to process what’s happening around her, and so have the challenges she must handle, with the result that SERPENT’S STORM is the most satisfying of the three novels.

Per the title of the first book, Callie is indeed the daughter of the human personification of Death. She had to take over the job temporarily before, when her father was kidnapped, but something much more serious happens here, with the result that Callie is caught up not only in the battle for control of Death, but also in the matter of who (or what) will reign in Hell.

As she has done before, Benson weaves together elements from many different mythologies, so there are Hindu deities, British-accented fauns, Greek-style hellhounds and elements of the Egyptian and Japanese pantheons (to name a few) all playing parts in Callie’s journey, which is narrated in perennially accessible style by the main character. There is nimble handling of central concepts, so that all religious concepts get their due, without any particular one being paramount (though reincarnation is part of the universe). Benson’s take on “God” is particularly deft, fitting right in without being likely to offend (unless the reader in question expects all fantasy literature to conform to a particular theology).

The stakes are higher this time around and there is a consequent sense of page-turning urgency, as the Callie gets into one apparently insurmountable trap after another. Although the series has always had gore, the horror feels sharper this time around, as ordinary humans become collateral damage in recognizable surroundings. Benson also displays a gift for describing uncommon tactile sensations, like what it’s like to swim in a body made for the ocean.

In SERPENT’S STORM, Benson brings Callie fully across the border between neurotic and self-obsessed to sometimes self-deprecating but actually self-aware, a difficult transition to pull off midstream in first person. Best of all, Benson ends on the perfect final line, one that puts all that has come before into exactly the right perspective. This is a thoroughly enjoyable, imaginative book, well-realized in both concept and execution.