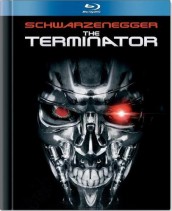 How many versions of this 1984 James Cameron classic do we need to own? Well, if you want Hi-def, you need to add this one to the list

Like the many home video incarnations and special editions of John Carpenter’s original HALLOWEEN, the various re-releases of James Cameron’s 1984 classic THE TERMINATOR are too numerous to mention.

However, now that it’s been finally remastered for high-definition Blu-ray, it’s time to open up the pocketbook and splurge for the film once again, because it’s worth it.

TERMINATOR was director James Cameron’s big breakthrough as a filmmaker (even though he helmed PIRANHA II: THE SPAWNING and was reportedly fired off of it a couple years prior). All of Cameron’s Roger Corman training as an art director/special effects guy/second unit director really came into play with this ingenious story of a time travel, cyborgs and a future world taken over by machines.

Cameron co-wrote the film with producer Gale Anne Hurd, and her input definitely brings our heroine Sarah Connor (Linda Hamilton) to the fore. She starts off as a somewhat mousy, waitress who blossoms into the kind of gutsy warrior that will spawn John Connor – the future leader of the resistance against the machines.

However, with time travel in the future perfected, the machines have sent a cyborg Terminator (Arnold Schwarzenegger) back in time to eliminate Sarah Conner before she can give birth. The humans have an ace up their sleeve too – Kyle Reese (Michael Biehn) who is sent back to protect her.

The story is full of twists and mind-bending time travel paradoxes, but Cameron does a credible job of making everything work and easy to follow.

There’s humor, some great characterizations and above all, some impressive action on what was a very limited budget. The use of miniatures in the future scenes, some great stop motion and the clever Stan Winston make-up effects on really add up to an impressive directorial coming out party for Cameron.

He displays a very sure hand here (and he certainly had a lot to prove after PIRANHA II) and he delivers with flying, futuristic colors.

Sure, there are some elements that heavily date the film (hair styles, some dialogue, and some of the source music), but this is the movie that spawned three other films and a TV series, so there’s not a lot of complaints here. The story still holds together, and that says a lot.

The Blu-ray transfer is phenomenal, and it really enhances the film, bringing it back to a place that hasn’t been seen probably since Cameron first committed these images to film. It’s gorgeous to look at and it blows many modern day science-fiction films out of the water with the simplicity and elegance in the way some of the special effects are shot.

The special features a pretty skimpy – primarily leftover from the previous DVD incarnation. Nothing new is added, and not even all the DVD features are available here. The deleted scenes also make a reprise, and one of the deleted moments toward the end actually sets up what TERMINATOR 2: JUDGEMENT DAY ultimately hinges its major plot points on.

Making up for lack of special features, is the special edition packaging that includes a hard-cover case and a mini-booklet with photos and text on the actors and the making of the movie.

THE TERMINATOR is one of the 1980s greatest sci-fi films, and Cameron delivered the even better TERMINATOR 2: JUDGMENT DAY seven years later which lived up to the brilliance of the first film and then ratcheted things up to a whole other level with its much bigger budget and ground-breaking CGI effects for its time.

Click on link: AX’s Exclusive Interview with Linda Hamilton on the future of the TERMINATOR franchise