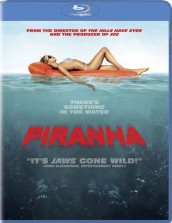 Cheesy, silly and filled with ample gore and nudity – who cares about story or 3D?

Not since SNAKES ON A TRAIN has a mainstream feature film so embraced its inner cheesiness and heralded it proudly in its marketing campaign then last summer’s PIRANHA.

Released in 3D, it featured so much gore and nudity (not to mention a glorious underwater girl-on-girl ballet), that it clearly honored its exploitative roots as a remake of the 1979 Joe Dante directed original.

PIRANHA, on Blu-ray, is not in 3D – but it doesn’t need to be in order to enjoy it. The story is set into motion when an earthquake unleashes a whole bunch of prehistoric piranha that attack spring break partygoers at Lake Victoria.

The film does a slow build, much like the original, until all-out carnage takes out the entire beach going community. It’s gloriously gory and over-the-top and takes pride in it.

Anchoring the movie is a strong performance by Elizabeth Shue as a local Sheriff and choice cameos by Richard Dreyfuss (who is clearly playing his JAWS role), Christopher Lloyd (who channels his Doc Brown/BACK TO THE FUTURE character) and Jerry O’Connell as a sleazy GIRLS GONE WILD-esque DVD producer.

The highlight of course is the gorgeous Kelly Brook who doesn’t mind being bikini-clad throughout most of the movie or going nude and is of course, one of the splendid highlights of the aforementioned underwater ballet.

Special features include commentary, deleted scenes with commentary (there’s some additional nudity and gore here, but nothing sorely missed from the film), 10 whopping behind-the-scenes featurettes and deleted storyboard sequences.

Few films could get away with the kind of outright cheesiness as PIRANHA, but it’s refreshing that filmmakers whole-heartedly embraced the cheese using the kind of super-budget Roger Corman’s exploitation fare only wished he had.

This film is gory to the hilt and delivers on all cylinders. Yes, it’s as ridiculous as they come – but some times intentional cheese is good. Oh, and did I mention Kelly Brook is naked?