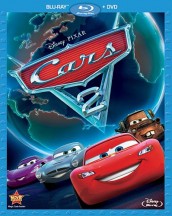 Not Pixar’s finest hour – a mess of a movie, but you can’t hit a homerun every time

I’ve never been more disappointed in a Pixar film than I was with CARS 2 – an abomination if there ever was one with the Pixar organization whose batting average has been impeccable since TOY STORY.

Even when the movies have been just okay (THE INCREDIBLES, RATATOUILLE), they’ve still had some value and some great humor/animation thrown into the mix.

Even the brilliant TOY STORY 3 shouldn’t have worked, but the Pixar team found a way to hit that one out of the park as well.

Sadly, we’re saddled with CARS 2, which takes Lightning McQueen (voice of Owen Wilson) and Mater (Larry the Cable Guy) and transplants them on an overseas adventure to participate in a World Grand Prix – which is a clever ruse to involve Mater into 007-esque international espionage.

While some of the film’s James Bond trappings are actually the best parts of the film – it’s the rest of the storyline that just doesn’t hold together all that well and is actually quite boring.

All the racing scenes are not that exciting (and luckily are not as big a part of the movie as it could have been).

The message of the film is an okay one – be grateful for who you are and don’t let anyone put you down and make you evil. And there are some funny in-joke gags (like the Victor Hugo one).

The animation is quite impressive too. Pixar tries to create Michael Bay/James Bond-esque action epic and they succeed in creating some pretty impressive action sequences. Yet, the story just doesn’t connect.

Taking a secondary  character, albeit a fun one like Mater, and putting him as the newly minted star of the film only shows how wayward the film is. Mater would have been great for a direct-to-DVD sequel, but making him the focal point gets old, really quick. Case in point – imagine TOY STORY 4 featuring Buzz and Woody on an adventure where Mr. Potato Head is the star.

However, for kids who dig cars, the film will likely end up in their collection anyway. The 2-disc combo pack features not only the Blu-ray, but also the DVD. The special features are pretty skimpy, including director commentary with Pixar head honcho John Laseter and two shorts.

The first is HAWAIIAN VACATION featuring the TOY STORY characters. It appeared on the film when CARS 2 was shown in movie theaters and it’s just as delightful as the TOY STORY films. Fun, quick and silly, it features Ken and Barbie thinking they’re going to hitch a ride in a backpack for a Hawaiian Vacation and end up in the bedroom with Woody, Buzz and the rest of the gang, so they decide to create Hawaii in the bedroom.

There’s also a brand new CARS short featuring, yes, you guessed it, Mater. It’s called AIR MATER and it’s an okay little diversion where Mater learns how to fly and ends up at an air show. The jokes aren’t as lightning fast (so to speak) as the TOY STORY short, and it has a rather shameless tag where Mater suggests they should make an animated movie about planes – which Disney is doing right now and it arrives in theaters in 2013. It’s called, obviously, PLANES (there’s a teaser trailer for it on the disc as well).

The problem with the short though is it negates all the events that happened in CARS 2. When Mater tells Lightning he knows  how to fly, Lightning doesn’t believe his story. Well, didn’t Mater AND Lightning fly through the sky (via rockets) in CARS 2? Super sloppy stuff.

CARS 2 should have been at least tolerable, and frankly it’s the most boring Pixar film to date. It’s the one nasty little speck on a perfect resume. Let’s hope PLANES (which oddly isn’t carrying the Pixar logo on the teaser) is slightly better.