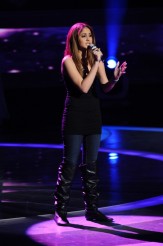 AMERICAN IDOL RECAP: Karen Rodriguez Given the Spicy Spanish Boot Off the Show

An hour is way too long for these results shows on the world’s greatest karaoke competition, AMERICAN IDOL.

This is nothing new, I’ve been saying it for years, but just to prove a point instead of just giving us a half hour where the results are distributed and maybe we have one performance, we have all of this crap that was given last night during the results show:

Anyway, you get the idea. Way too much filler. Luckily, that’s all I’ll bore you with of that and we’ll get to how the results were distributed.

Jacob Lusk, Casey Abrams and Lauren Alaina are the first to be brought on stage, and if I am right in my predictions, all three should be safe. Oh last night, I predicted that Naima, Thia and Haley would be in the bottom three. Yep, all three brought on stage are safe.

Then, Haley Reinhart and Paul McDonald are next. Haley is in the bottom, Paul is safe.

Scotty McCreery, James Durbin and Pia Toscano are next on the hot seat. I gotta believe all will be safe. And, yep, all are safe.

Stefano Langone and Naima Adedapo are next. Stefano is safe. Naima is in the bottom three. So far, I am two for two in the bottom.

So who goes home? Karen goes home, meaning Naima and Haley are safe. Man, I was really wrong about the Latin voting bloc. I thought for sure, given they put her through in the original Top-24 voting process that she would really garner the votes this year. But I also pointed out numerous times that her singing in Spanish and English would alienate Middle America who doesn’t want to hear that.

Why I was wrong with picking Naima to go home, I am right about how much the tween 13-year-old girls continue to be the most dominant force on IDOL (as they have been nearly every year for the past five years). Obviously, they are the ones voting for the boys and that is the reason why there have been three girls in the bottom three the first two weeks. I expect this trend will continue until we get rid of most of the so-so girls and the really talented ones remain. Of course, I’m usually wrong, so who knows. 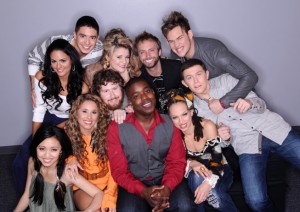