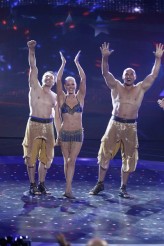 Only four are selected for this Season 6 round of AGT

No surprises tonight on AMERICA’S GOT TALENT’s top four picks to move onto the semi-finals. The eight acts left behind didn’t cut it and sadly, were the right choices to send home. Of the four acts picked only one was picked by the judges, the other three were voted for by the people at home the previous night. First to stay was Snap Boogie, the hip-hop break dancer with tons of charisma and a ginormous amount of talent. Eliminated were Duo Aero, the acrobatic act and The Fearless Flores Family, the motorcycle stunt family that had no where else to go with their motorcycles in a ball act.

In a classic pimp their own shows moment Cedric the Entertainer was in the audience talking to AGT host Nick Cannon about his upcoming NBC show IT’S WORTH WHAT? C’mon! Shameless NBC! At least wait for a commercial break before you start shoving your other shows down our throats.

Speaking of plugs, Avril Lavigne performed a song from her new CD to a very enthusiastic crowd. She’s so tiny!

Anyway, then came the time for the 2nd semi finalist to hear his/her/their fate. J. Chris Newberg, the guitar-playing comedian was out. Squonk Opera, no surprise there, was voted out …and Sandou Trio Russian Bar was in. Next out was Dezmond Meeks, the lounge singing performer and Echo the talking parrot who was inconsistent with what he wanted to say to the audience. Third in the semi-finals was the sweet voiced 11-year-old Anna Graceman.

So, then we were left with just one more to join Snap Boogie, Sandou Trio Russian Bar and Anna Graceman. After Those Funny Little People were told they didn’t make it, only to the applause of Piers Morgan – tacky Morgan …very, very tacky – it was down to the Miami All Stars and the Fiddleheads. It was an obvious choice. The Fiddleheads massacred Billie Jean the night before. The Miami All Stars shined as a large and pristine dance troupe. The fourth to go onto the semi-finals – chosen by the three judges was the Miami All Stars. Now four await their chance to compete with the other 12 picked over the upcoming weeks in the semi-finals. Stay tuned.