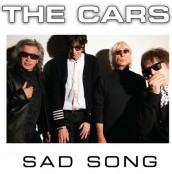 It’s fitting that Record Store Day 2011 would include a 7 inch single from 1980s band The Cars who have reunited for the first time since 1988.

They debut two new songs that are off their new album MOVE LIKE THIS due out May 10 and it feels like it’s the 1980s all over again.

Sure, downloading tunes is easier, but to actually get an A and B side in a nifty sleeve reminds us why going to record stores is such a long lost tactile art in the digital age.

“Sad Song” is the name of the new single from the Cars and it shows off the band in fine form as they shake it up once again. The single has echoes of the keyboard heavy elements the band is known for and catchy lyrics by songwriter and singer Ric Ocasek, but it also has a freshness to it as well.

Produced by Jacknife Lee, the song may have that tinge of retro Cars, but it also feels like a brand new programming engine is behind some of the mix as well. It also sounds phenomenal on vinyl.

The Cars really had trouble matching the uber success of 1984’s HEARTBREAK CITY and their follow-up album DOOR TO DOOR was uneven at best and they broke up shortly thereafter.

Ocasek went on to an okay solo career and was always the hold-out when it came to reunions, so it’s refreshing to hear him get the band back together and produce a couple of songs that sound as if the group never left.

The B-side is “Blue Tip” which again captures the band in fine form. While not as imminently catchy as “Sad Song” it still is a perfect B-side to goose old fans (and gain some new ones) to check out MOVE LIKE THIS when it drops.

Check out your local independent record store to find out if “Sad Song” is still available and CLICK HERE to see other releases from Record Store Day 2011.