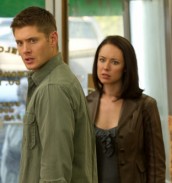 SUPERNATURAL has made a living on creating compelling characters that return to the show time and time again to either aid or hinder the Winchester brothers. Crowley (Mark Sheppard) being one of the all-time greats and the main thrust of the season (so far) this year.

But along the way they have a number of recurring characters that just stand out and make that particular episode special. Death, in his second appearance in the show in “Appointment in Samarra,” is quickly becoming one of these characters.

One of my favorite episodes from Season Five was the first appearance of Death. More because of what the episode wasn’t. Up until Death came on the scene, Dean (Jensen Ackles) and Sam (Jared Padalecki) had battled the other Horsemen of the Apocalypse in typical Winchester brothers fashion. When it came to Death, who professed that he was older than God, older than Lucifer and Heaven and Hell, he was more reserved, more mature. He didn’t fashion a fight even if the boys could fight him, but instead offered a way to defeat Lucifer because he didn’t like being his servant. He showed grace where he should have been a monster. And that was freaking awesome.

Again here in “Appointment in Samarra”, Death once again proves that he is not the creature or demon or monster that he appears, but someone that is more interested in maintaining balance. Balance that has been upset with what’s happening with souls – a cryptic message but something that obviously we’ll learn when the show returns for the second part of the season in January.

Instead of wanting to strike some sort of mortal deal with Dean to get Sam’s soul out of the cage of Hell, Death (once again brilliantly played by Julian Richings) instead wanted Dean to experience what it is like to be Death for the period of 24 hours (with the help of friendly Reaper Tessa played by Lindsey McKeon). If he did that, he would release Sam’s soul with a barrier that would block any of the bad memories of his time locked in the cage.

It wasn’t so much of Death toying with Dean or making him his bitch for a period of 24 hours, but it was Death teaching Dean about balance. The balance of things in the universe and if one of the dominoes of life and death get out of whack, it causes many other dominoes to fall in its place. Once again, Death is more of a sophisticated creature than we have been led to believe in the SUPERNATURAL universe.

Dean learns his lesson the hard way by sparing a little girl only to have a doctor die that wasn’t supposed to. This causes Dean to lose the wager. Death never really cared if he completed it or not, but that he learned his lesson and as a result he agreed to retrieve Sam’s soul.

Now this whole business didn’t agree with Sam at all. Hearing that the artificial wall may not hold and cause Sam to die or be left a vegetable just wasn’t something that a soulless Sam could bare. So he figured out a way that he could block any soul from coming into him. All that it required was that he killed his father, or a father figure and with Sam’s dad already dead, he set his sights on Bobby (Jim Beaver).

If we didn’t need a reason for Sam’s soul to be put back in his body already this season (from him willingly letting Dean get turned into a vampire, to him having no emotions about, well, anything), Sam about to kill Bobby in order to save himself was all the motivation we as the viewer – and especially Bobby and Dean – needed to see.

Now, with Sam’s soul back in place, where do we go from here? Obviously, as Death indicated, there is something that is going on with souls. But what? We don’t know. Not yet at least, but if it is upsetting the balance of things to where a being such as Death takes an interest, it’s nefarious to say the least. With Crowley out of the way, one assumes that someone or something is the culprit and it pains me that we’ll have to wait more than a month to find out.