Home » Exclusive Interview: Bradley Whitford is one of THE GOOD GUYS 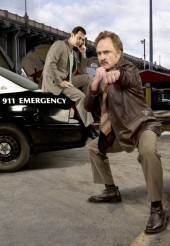 Exclusive Interview: Bradley Whitford is one of THE GOOD GUYS

The actor talks his Fox series, the green Speedo, Joss Whedon and THE CABIN IN THE WOODS

On Fox’s great but under-appreciated THE GOOD GUYS, Bradley Whitford plays Dan Stark, a cop who was hot in the ‘70s and ‘80s and is still caught up in the look and mores of those decades. His new partner Jack, played by Colin Hanks, is a scrupulous young officer who can’t believe Dan’s tactics.

Whitford, immortalized as White House staffer Josh Lyman for seven years on THE WEST WING talks about his very different role in THE GOOD GUYS – and about working with Joss Whedon and Drew Goddard on their forthcoming horror movie THE CABIN IN THE WOODS without giving any spoilers whatsoever. (Note: this interview was conducted before it was known that THE GOOD GUYS was not being renewed.) 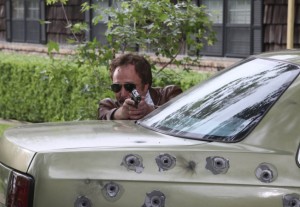 ASSIGNMENT X: Were you looking to do another series when THE GOOD GUYS came along?

BRADLEY WHITFORD: Years and years ago, I did a movie with Clint Eastwood, and it was right after he won an Oscar and in the New York Times Arts & Leisure section, there was a big story about him that said, “Clint Eastwood’s vision of America.” He was laughing, saying, “Vision of America? You know, five years ago, I was directing a monkey. Now they think I’m Gandhi. I took the best role available.” And it really does come down to that. I can imagine no nightmare worse than being on a TV show, which is a relentless shoveling of story coal into the engine, if it’s not a part that you really enjoy doing. I was looking to do something obviously radically different from a smart guy in a suit.

AX: Is your character Dan Stark a dumb guy in a uniform?

WHITFORD: No, he’s not dumb, but he’s not an effete guy who’s working in the White House. It’s really fun to play these roles of guys who are just operating totally out of their reptilian brain stem.

WHITFORD: I’ve done ‘em in plays, but yeah, I do get typecast a lot as guys in a suit and so in terms of doing a TV role, yes.

AX: Is there anything in your past or anybody that you know that you’ve had to research to get into the spirit of it?

AX: Are you lecherous towards Diana-Maria Riva’s character?

AX: Are you lecherous towards Colin Hanks’ character Jack?

WHITFORD: No. Not that equal.

AX: How has your collaboration been as actors?

WHITFORD: Love him, love him, love him. I was in the audition and I just immediately knew that this guy was funny, this guy was smart and that he was quick. I mean, the most important thing as an actor and as a human being is who that person you’re working with all day is, and he’s just been wonderful.

AX: Have you done anything comparable to THE GOOD GUYS in terms of its physical demands?

WHITFORD: No, I did a Broadway play called BOEING, BOEING. I was [in it] with Mark Rylance when it opened. It was a lot of fun.

AX: Is it exciting for you when you’re sliding across the floor, shooting two guns at once?

WHITFORD: I’m more excited for my son. I’ve had to shoot a lot of guns in my life – I once was doing a bad TV movie, and I would reshoot it, because I was so inexperienced with guns, they looked at the dailies and I was going, [makes gun noise], “Pwww! Pwww!” I was actually making the sound as I did it. And I grew up Quaker, so there’s nothing more absurd than a Quaker with a gun, but my son is very excited.

AX: Have they let you do any of your own stunts?

WHITFORD: They’ll let you do whatever you want to. I wanted to do very little [laughs]. I don’t understand what motivates the stunt guys. We have a great stunt coordinator, Russell Towery, and they did the craziest things. I mean, they jump through windows that are not breakaway glass – crazy stuff. No, I don’t go near that.

AX: Does your double look to you to see how you move, so he’s moving like you?

WHITFORD: Yeah, and they cover their faces, too. 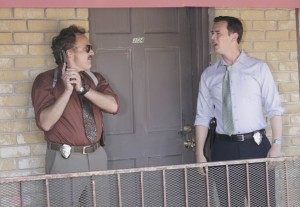 AX: Besides starring in THE GOOD GUYS, you’re also one of its producers. How did that come about and what do your producing duties entail?

WHITFORD: It came up for a number of reasons. I’m interested in being as involved as I can be. John Wells [on WEST WING] was a wonderful sort of mentor for me in terms of writing – I got to spend a lot of time in the writers room on some WEST WINGs and that level of involvement is important to me. And you want to know that you’re going to be working – you want to have some say in terms of who you’re going to be working with and all that. But [GOOD GUYS creator] Matt Nix and I agree – I didn’t want it to just go on a credit.

AX: You’ve been in some classic fare in several genres: WEST WING on TV and BILLY MADISON as farce on the big screen …

WHITFORD: [Prior to BILLY MADISON], I had been playing a lot of yuppie scum, and I was concerned about playing yuppie scum, because certainly the reason I wanted to do this part [in GOOD GUYS] is, after WEST WING, you just get a bunch of guys in suits talking intelligently about stuff, and I had been the yuppie scum in a number of movies and I was getting typecast, so I was worried about doing BILLY MADISON and Adam [Sandler] had never done a movie before and I always remember my agent going, “You should do it, nobody’s going to see this” [laughs]. Generation after generation of drinking games later – in fact, I was a little relieved when WEST WING happened, because it kind of got BILLY MADISON out of the top line of the obituary. Adam, by the way – because I’ve bumped into him over the years – is a really sweet, grounded guy who works like a dog.

AX: And do you have a favorite scene or a favorite case you’ve had on THE GOOD GUYS?

WHITFORD: We did an episode called “Silvio’s Way” that was my favorite. It was just ridiculous. I was undercover and there was a lot of silly things happening.

AX: Are you enjoying playing a non-suit as much you thought you would at the outset?

WHITFORD: Yeah. It’s definitely fun to change it up.

WHITFORD: It’s not more, it’s just a different muscle [laughs]. A project like this is just radically different from the recent ones I’ve done. 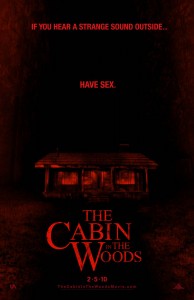 AX: Do you have anything else besides GOOD GUYS that you want to talk about right now?

WHITFORD: THE CABIN IN THE WOODS. I’m not allowed to talk about it. It’s very secret [laughs].

AX: Without spoiling anything about the movie itself, how was it working with producer Joss Whedon and director Drew Goddard, who wrote the script together?

WHITFORD: I love them. Joss is one of those people I’d work for any time. They have a fierce vision, it’s a fierce, crazy, wonderful movie and I loved working with them.

AX: How was Drew Goddard as a first-time feature director?

WHITFORD: Drew was incredible. He really knows what he’s doing.

AX: Has  your character  in GOOD GUYS evolved the way you anticipated?

WHITFORD: I certainly did not anticipate this character, no [laughs]. You figure it out as you do it. Certainly it’s been fun because I didn’t realize how far I could go with it. I just didn’t realize how crazy-silly it could be. It’s gotten a lot crazier than I thought it would get. I never thought I would end up in a green Speedo on national television.

AX: How did you look?

WHITFORD: I would call it regrettable.

AX: Did other people say you looked good?

WHITFORD: Yeah, but they just have to say that.

AX: Did you know that was coming up and you had to work out for it?

WHITFORD: No. It happened very fast. I was instructed to gain weight and this is a tip for any actor – when you’re doing a television show, when the head of the network says, “It would be great if you gained some weight, because this is kind of a dilapidated character,” the next thing coming is a script where you’re in a Speedo. So don’t do it.

AX: Anything you’d like to say about THE GOOD GUYS?

WHITFORD: I got very excited about this, because Matt’s a really great show runner. That’s the bottom line and the tone of this – a kind of Elmore Leonard, RAISING ARIZONA tone. It’s something that has not been on TV for awhile. It’s just been a lot of fun.