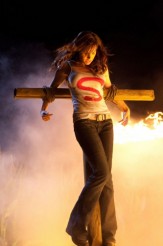 The beginning of what looks to be a wild season, but one that also pays respect to the Superman lore

“And now, the final season of SMALLVILLE.” This is how it begins, a solemn reminder that SMALLVILLE will be no more after ten seasons, followed by a whole lot of confusion. Seriously, so much happened in “Lazarus” that it’s kind of hard to know where to begin. Clark (Tom Welling) being given a second chance after having a near death experience only to be told by Jor-El (Terence Stamp) that he is somehow failing in his duties as a hero.

Even better, Clark has a full-on hallucination when he receives a visit from his deceased father, Jonathon (John Schneider). Oliver (Justin Hartley) is held captive by someone or something and Chloe (Allison Mack) trades herself for his freedom. Lois (Erica Durance) discovers Clark’s secret, is kidnapped by a Lex clone (Mackenzie Gray), and then bolts to Africa after Clark saves her. And yes, you read correctly, a Lex clone. Several actually, including a young (and now only surviving) version of Lex, or Alexander as he is known (Jakob Davies), that Tess (Cassidy Freeman) decides to adopt.

Yeah, that’s a lot of story, and I’m not really sure where any of it is going. Well, correction, I have an ideal of where it’s going, being that this is the story of Superman in its final season. But despite all that is going on, there is a theme that is being emphasized, a thread tying the entire saga together, although for the characters on SMALLVILLE, it’s acting more like a noose. More on that in a second.

First, let’s recognize that for SMALLVILLE, this is it. Season Ten is, as was so emphatically confirmed by Tom Welling during the opening sequence, the final season. This is a special occasion – after all, no one has played the role of Superman longer than Tom Welling. This truly is the end of an era. And after a decade of strictly adhering to a certain set of rules, SMALLVILLE has realized that now is finally the time to break some rules.

The tights.  Finally displayed in their full glory, although Clark has yet to don them.

Flight. I don’t know about you, but when Clark caught the Daily Planet Globe, that looked like some flying to me.

Season ten… The final season of SMALLVILLE.  However you want to phrase it, it really does overshadow everything else on SMALLVILLE, making it hard to focus on just one episode, even if it is the season premiere, but we must try, so let’s get this over with.

SMALLVILLE will always be campy. That’s its style, love it or hate it. I’ve become desensitized to it.

Erica Durance and Cassidy Freeman will never win an Emmy for their acting. Ditto for Justin Hartley, although he is marginally better.

Tom Welling and Allison Mack always impress with their convincing acting, especially when you take into account some of the dialogue they are given.

The storylines are never the greatest, but they can be fun or at times shockingly emotional. Clark’s encounter with Jonathon, for example, may be one of the most moving scenes I’ve ever seen on SMALLVILLE.

But frankly, who cares about any of that. SMALLVILLE has a plan this season, and that’s to go out honoring the legacy of Superman. Remember the theme I mentioned earlier? Sacrifice. Superman is a noble person, and nothing embodies nobility better than sacrifice. Season Ten looks like it going to focus not only what Clark must give up, but what all the characters on SMALLVILLE must selflessly do to ensure the safety of the planet.

Why is that? Because being a hero is about sacrifice. It’s about putting the needs of others ahead of your own. It’s about serving the greater good.

Superman has always been about that, and it’s a pleasure to see SMALLVILLE maturing and trying to share that sentiment with its viewers. SMALLVILLE may not be great television, or even smart television, but it is trying to capture the essence of Superman. Clark has one more journey to make, but he will make it, and in the end, after ten years in the making, the story of a teenage boy trying to find his place in the world will be over.

Looks like the boy is finally becoming the Man of Steel.