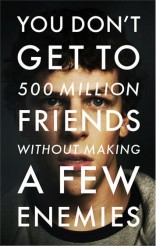 There is a lot of controversy surrounding the accuracy of the storytelling in THE SOCIAL NETWORK. Based loosely on Ben Mezrich’s nonfiction tome THE ACCIDENTAL BILLIONAIRES about the origins of the social networking site Facebook, THE SOCIAL NETWORK has been accused of playing with the facts. This probably doesn’t matter unless one is writing a thesis about the real origins of Facebook, in which case, other sources should be researched. However, anybody wanting to see a first-rate drama with phenomenal acting and dialogue so brisk, funny and effortless-sounding that you want to be in the room with these people even when they’re being nasty, this is your movie.

THE SOCIAL NETWORK bounces back and forth in time. We see the events that led Harvard students Mark Zuckerberg (Jesse Eisenberg) and Eduardo Saverin (Andrew Garfield) to start what became Facebook. These are interspersed with what occurs several years later, with two separate legal cases against Mark – one from erstwhile best friend Eduardo and the other from three more ex-associates – being brokered by the involved parties and their lawyers.

There are a lot of wonderful things about THE SOCIAL NETWORK. Director David Fincher previously demonstrated with ZODIAC that he has a facility for telling stories about men who are gripped by obsession. Here he shows that he can do so at a brisk pace – THE SOCIAL NETWORK clocks in at two hours, but it’s so eventful and character-rich that it seems to happen at a sprint. It’s handsome to watch, of course, but Fincher puts the visuals completely in the service of the narrative, never straining to include shots that don’t advance the story.

Aaron Sorkin’s screenplay does a number of things brilliantly. He juggles structure so that, although flashbacks and flash-forwards abound, they are juxtaposed so that they inform one another. A betrayal in the past resonates even more with us when we see how much pain it is still causing in the present. Triumph is magnified when we see it set next to the defeat that preceded it.

The tale is complex, but never feels convoluted. Happily, while computer programming is essential to what’s going on, we see practically none of it up close (it is fascinating to those who do it, but it’s not a very cinematic activity for onlookers).

The dialogue is so seamlessly delicious that, although many of the characters are not especially pleasant individuals, we feel like we want to hang out with them just to hear them banter, crow and quarrel. Finally, Sorkin does a virtuoso job of delineating characters who are uncommonly flawed fascinating in their many dimensions.

Eisenberg gives Mark a prickly genius hauteur mixed with a genuine sense of wistful bewilderment that people around him have bad reactions to things he says and does. It’s as though Mark sees himself as stating fact and can’t believe that anyone is offended by it. Although we know in the broad strokes where all of this is going, Eisenberg’s performance offers consistent nuanced surprises. Garfield accesses hope, loyalty, disappointment and pain at bone-deep levels as Eduardo. Armie Hammer is very funny and very different as each of the two wealthy, athletic twins whose attempts to hire Mark to design a site for them have huge ramifications.

One complaint leveled at socializing on the Internet is that it depersonalizes human interaction. THE SOCIAL NETWORK is about the establishment of one very popular site, but because of the way it is done, the film is as personal as movies get.