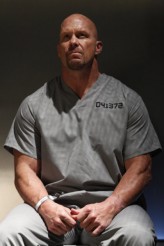 Not sure why the series is so uneven this season, but it’s another so-so episode lacking the bite and wit of it former glory

Something has definitely been off with CHUCK in its fourth season. Maybe making Chuck (Zachary Levi) more of a spy has actually taken the edge off of why the series was so charming in the first place – he was an average guy put in extraordinary circumstances that he was incapable of dealing with alone.

Add to that the “will they or won’t they” relationship between Chuck and fellow spy Sarah (Yvonne Strahovski) completely gone since they’ve consummated and become a couple and the show has had to stoop to relationship woes to keep their romance alive. Unfortunately, when the relationship woes include Sarah getting upset that Chuck eventually wants to have kids and get married, it seems too pat and obvious for a show like CHUCK that’s always been so clever and different in the handling of this type of material.

In “Vs. The Cubic Z.,” the Buy More is expecting a major shipment of a hot new military game that comes out at Midnight. Lines are around the block, but SURPRISE, they aren’t getting enough copies in to handle the bloodthirsty crowd. Hence store manager Morgan (Joshua Gomez) must contend with the biggest issue of his newfound managerial career, while his former boss Big Mike (Mark Christopher Lawrence) – who is also dating his mom – shows up to ask permission to marry his mom. In order to help with the crowds, Morgan asks Big Mike to help out – which results in his former boss becoming his assistant manager.

Meanwhile, Sarah is freaking out about the baby thing, as two of Chuck and Sarah’s most formidable opponents end up at Castle on their way to a government safehouse.

Heather Chandler (Nicole Richie), a former bad spy and Sarah’s high school nemesis pops up to make her life uncomfortable (particularly putting the screw to her about being in a relationship while also being a spy), while super-brute Hugo Panzer (Steve Austin) shows up to give Chuck another mismatched showdown.

In the middle of all this, Chuck tries to get more information regarding his M.I.A. mom (Linda Hamilton), which conveniently enough, Heather has intel on.

Boredom is never a word that should be used with Chuck, but that’s precisely what this episode delivers. It takes place primarily at the Buy More, which may be another reason why so many of the plot points lately feel like we’ve “been there, done that.” And Sarah’s whole relationship insecurities feel so forced and false at this stage of the game, that it’s torpedoing a perfectly interesting relationship between her and Chuck.

Despite the show not living up to expectations, the acting is still top notch and there’s enough comedy to make the episode watchable. Let’s hope the series gets out of its fourth season funk though. This show has always been awesome, but the last two weeks have  barely been “just okay.”