The good, the bad and the very, very strange films of the fall classic

The Toronto Film Festival has always been more than just a bunch of movies. With the easy mass transit, the wealth of great restaurants and swinging parties it’s a world class event. But who wants to hear about what I ate and drank? It’s all about the movies dummy. Here’s the highlights… 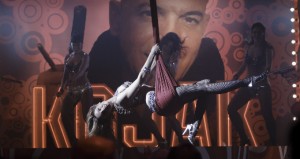 The best film of the festival also had the most confusing title. In some press books it was referred to as THE LAST CIRCUS in others THE BALLAD OF THE SAD TRUMPET. Never mind. What you need to know about this Spanish film from director Alex de la Iglesia is that it is balls out insane. Killer clowns? Check. Revolutionary war? Check. Circus sex? Check? Revenge, violence and madness? Check, check and check. Beautifully shot, crazily acted and featuring a climax that draws equally from the Phantom of the Opera, John Woo, Renny Harland and Hitchcock’s SABOTEUR, it’s the mash up find of the year.

Life got you down? Feeling blue? Stay far away from Alejandro Gonzalez Inarritu’s latest glum fest. The man you brought you (down) in BABEL and 21 GRAMS goes a grayer shade of bleak with the story of redemption set in Barcelona. Starring a never better Javier Bardem, it’s the best “I gotta make good before I die” saga since Nicolas Cage took up the bottle in LEAVING LAS VEGAS.

Two years ago writer director Darren Aronofsky surprised us with THE WRESTLER, a film that both resurrected Mickey Rourke’s acting career and took down the usual cliches inherent in movies about wrestling. He’s back with his trademark juiced up style to put his personal stamp on ballet movies. Don’t expect good taste, high art or even much logic. Star Natalie Portman, who did most of her dancing scenes, gives it her all but the film gets stolen by a smoldering, smirking Milas Kunis (who knew THAT ’70s SHOW would produce so many promising actors?). Think of it as an art house version of SHOWGIRLS: with Portman playing the Elizabeth Berkley part and Kunis aping Gina Gershon.

The perfect double feature to test your steel. BURIED is the one set (box?), drama about a truck driver (Ryan Reynolds) who wakes up buried in a coffin six feet underground with just a cell phone to keep him sane. 127 HOURS is the true tale of a reckless hiker (James Franco) who gets pinned under a rock. Both films work up a sweat and give their lead actors ample chances to give it there all. (Its cinema’s closest equivalent to the stage’s one man show.) BURIED‘s endless claustrophobic scenes had audience members gasping for breath when it premiered earlier this year at the Sundance Film Festival. At the Toronto screenings of 127 HOURS several people actually fainted.

Tense, grim and atmospheric drama from Argentina about current craze where everyone benefits from staged car accidents (lawyers, doctors, cops etc). At heart a desperate romance, the film benefits from the snazziest single take scenes since 2006s CHILDREN OF MEN.

Leave it to Werner Herzog to make the first tasteful 3-D movie. After getting exclusive access to the Chauvet caves of France, Herzog (gingerly) trains his probing cameras on the cave drawings said to be the oldest known creations of humankind. And be sure and stay for the last segment when the film suddenly veers off into a related story about nuclear water run off and albino alligators (I kid thee not). 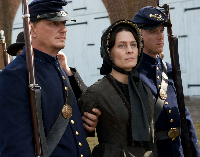 Leave it to Robert Redford to make an all too tasteful film about a woman caught up in the post Abraham Lincoln assassination aftermath. What could have been a gripping look at a fascinating historical footnote instead gets the AMISTAD treatment (you do remember Matthew McConaughey in granny glasses and massive mutton chops don’t you?).

One of the buzz films of the festival and one of the most polarizing. Some found this high school take on THE SCARLET LETTER to be fast, funny and sprinkled with memorable dialog reminiscent of JUNO. Others found the cloy attitude, overly wise dialog and overall annoying twee factor reminiscent of JUNO. While I’d lean more toward the latter you have to admit center character and star Emma Stone is indeed the new “it girl.”

Clint Eastwood ditches his recent historical films and genre revisions to take on a little old subject called death. Told in overlapping stories and starring the likes of Matt Damon and Bryce Dallas Howard, it’s much like his recent CHANGELING film; ambitious, well crafted, terrifically acted, somewhat gripping and yet somewhat less than a sum of its parts.

Charles Ferguson, the documentarian who made you so mad with NO END IN SIGHT, finds a clear and persuading way to make you just as mad about the 2008 financial crisis. Surprisingly entertaining, you’ll almost forget to get angry with the guilty business tycoons and government officials. (At least until you get to the end credits).

Philip Seymour Hoffman stumbles while attempting to both star in this convoluted New York based drama and direct it with any clarity. Maybe the cynics are right: he shouldn’t play the lead in a film.

BAD SANTA watch out. There’s a new perennial cult film designed to take the piss out of holiday films. This Finnish piece of snowbound fun recalls the uneasy mix of humor and horror that made GREMLINS so great and re-imagines the Santa legend with lethal results. And watch out for those nasty elves.

The usually very nice and very polite audiences of Toronto have always had a wicked taste for video nastiness from the Far East. SEX AND ZEN was big here and so was TOKYO DECADENCE. This year we get Julien Carbon and Laurent Courtaud’s RED NIGHTS, jammed to the seams with bondage, femmes fatales and kinky sex.

Robert De Niro and Edward Norton team up again to prove that together they can make a film lamer than THE SCORE. De Niro sports salt and pepper hair and bifocals. Norton, corn rows and a dippy accent. You have to wonder about a prestige Hollywood drama where a light weight like Milla Jovovich comes off best.

James Gunn, the guy who last wrote and directed the horror sendup SLITHER gets down, dirty and quite funny in this low budget story about a regular guy who wants to be a super hero. If all this sounds like last years KICK ASS think again. Rain Wilson stars in and  steals the action packed comedy from veteran scene chewing co-stars like Kevin Bacon and Gregg Henry.

Ben Affleck directs, co-writes and stars in this modern crime drama that can stand tall next to THE DEPARTED. Taking a stylistic tip or two from Straight Time, the Hughes Brothers’ DEAD PRESIDENTS and Michael Mann’s HEAT and THIEF, this rip roaring Boston based drama boasts a great supporting cast that includes Jeremy Renner and Pete Postlehwaite.