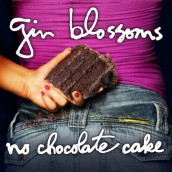 The Gin Blossoms were one of the 1990s strongest hook-happy groups that shot to the top of the charts with their hit single “Hey, Jealousy” off NEW MISERABLE EXPERIENCE and later with “Til I Hear It from You” co-written by pop-craftsman Marshall Crenshaw for the film EMPIRE RECORDS.

Though they disbanded in 1997, the group eventually reformed in 2002 followed by the lackluster 2006 disc MAJOR LODGE VICTORY.

Thankfully, the magic of the group’s earlier work has been resurrected on NO CHOCOLATE CAKE, a re-invigorated set of guitar driven pop nuggets.

The lush harmonies that made NEW MISERABLE EXPERIENCE so memorable are back in full force. The album kicks off to a great start with “Don’t Change For Me” which is more rockin’ than their mid-tempo tunes they’re famous for.

The eleven tracks are all good, though “Dead Or Alive on the 405” is the one outright misstep sounding like a poor-man’s Fountains of Wayne, but without the irony.

Many of the songs are dripping with the angst of love gone wrong or love lost, such as the excellent “I Don’t Want To Lose You Now” which is a perfect radio single and “Miss Disarray.”

The Beatles are channeled with the different “If You’ll Be Mine” (once again highlighting lush harmonies) while the album concludes with the catchy “Goin’ to California.”

Jesse Valenzuela’s vocals are at the heart of the Gin Blossoms’ recognizable sound. He brings emotion and heart to everything he sings here and it’s incredible to hear the group as a whole so charged.

Gin Blossoms never truly went away (what with “Hey, Jealousy” still played non-stop of rock radio), but with NO CHOCOLATE CAKE, they’re proving they still have a lot more road left in them as relevant and progressive pop artists.