The former LOST scribes also talk about the ending of that show as well as their forthcoming adaptation of OUIJA, based on the popular board game

How do you pick up the pieces of a cult classic like 1982’s TRON and turn it into the next big mega-budget, must-see high-tech 3-D blockbuster?

It all starts with the script and the right take on the material which screenwriters Edward Kitsis and Adam Horowitz (who are former LOST scribes) figured out early on. They were fans of the original and wanted to take elements of the original film and the character of Kevin Flynn (Jeff Bridges) and progress the story to the present. The end result is TRON: LEGACY which focuses on Flynn’s grown-up son Sam (Garrett Hedlund) who gets sucked into the computer grid and has to find his long-lost father.

In this exclusive interview, the scribes spoke with ASSIGNMENT X about TRON: LEGACY (which opens this Friday), the end of LOST and their feature film adaptation of the OUIJA board game. 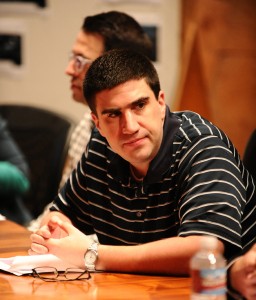 ADAM HOROWITZ: When we first pitched the movie to Brigham Taylor, an executive at Disney, he had the TRON game in his office. There is no bigger TRON fan than Brigham. I hadn’t played the game in years and it was just as difficult as I remembered it. My hand-eye coordination was never my strong suit. I loved that game though. When we had the meeting with him, he told us they were thinking of doing something with TRON. They had these amazing producers Sean Bailey and Justin Springer and this was an opportunity to come up with an idea to make it work. We put our heads together and came up with a pitch and took it to them.

ASSIGNMENT X: How do you decide if it would be a remake or sequel?

EDWARD KITSES: Honestly, when you’re at that phase, the producers are hearing pitches from different writers. We were coming from the television show LOST, so the chances of two TV writers getting such a big franchise were small, but we were huge fans of TRON. We never wanted to remake it, we thought it was blasphemous, but our goal was to write a movie that was from the same DNA, that would be a standalone, so if you’ve never seen the original TRON, you could totally come to this and appreciate it and get everything. That said, if you had seen TRON, you would be rewarded. That was our basic idea. So we thought, “who is going to take us into this world, the way Flynn took us in?”  and it was his son. Then it was, “what if his father was stuck in there and the villain was a 35-year old version of himself who trapped him in there?” And you go, “if there was an 18-year old version of me out there trying to kill me,  it represents everything I’ve grown from.” That’s the idea we had and we brought it to Sean and Justin and they said, “you have to meet Joe Kosinski.”

AX: The first thing though, when you have such a broad idea, you still have to know whether or not you can pull off a 35-year-old Jeff Bridges,” and “is the technology there to pull it off?” 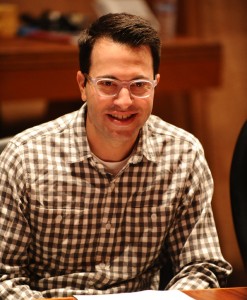 KITSES: We didn’t know. Joe Kosinski said “I can do that.” He worked with Digital Domain and the people who did THE CURIOUS CASE OF BENJAMIN BUTTON. He really researched it and not only found out it was possible, but figured out how to do it. A lot of time was spent on that very concept, but we were just two dumb writers thinking “wouldn’t that be cool.” We didn’t have to do the hard work of making that real.

AX: Did you want to do more with Bruce Boxleitner’s character of Alan Bradley and TRON?

KITSES: In telling this story, this was a father/son story. We wanted TRON to be integral to the story and he is, but what’s in the film, is pretty much what we had planned.

AX: When you wrote this, did you have in the back of your head, “what do we do if there is another movie?”

KITSES: You always have ideas. You always think of things and we come from television, so we’re always thinking, “what’s the next episode.” We don’t have the presumption and hubris to think, “we have to get going on it now,” because people have to like this one, but God willing, if they do, we’re more than happy to write many more TRON’s.

AX: Were you fans of TRON as kids?

HOROWITZ: We were very young, and saw it separately.

KITSES: We had the toys, played the video games and had the Intellivision game.

HOROWITZ: It was a very important film to us as kids.

KITSES: It’s interesting how it just stays with you. Adidas had these great TRON shoes six years ago and the Strokes had that great album cover and the parodies on SOUTH PARK and FAMILY GUY. For people of our generation, it’s a movie that just stuck with everybody. 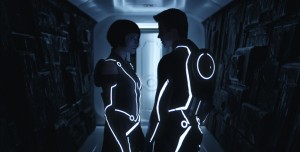 HOROWITZ: Our goal was to tell a story that a young kid could totally get it, appreciate it and love and then you can say, “hey, guess what, there’s another movie called TRON.”

KITSES: We’re parents of young children and we wanted this movie to be enjoyed by everybody. We felt it’s the kind of story that should be shown to everyone. Adults will get it on one level and hopefully the kids can get it on another level and come back to it. We wanted to write a story that would appeal to everybody. That’s what’s so fun about a lot of these movies we grew up with.

HOROWITZ: I went to see STAR WARS and I was so young, and I remembered sitting in the theater getting ready for the movie to start and this old guy in front of me, who was probably all of 19 looks at me and says, “have you seen this before?” And I said, “No,” and he said, “oh, you’re going to like this” and I did.

KITSES: We’ve made a career out of being 12-year old boys. “Wouldn’t it be cool if we did this.” We wanted this to be enjoyed by everybody.

AX: How was it working with TRON co-creator and original director Steven Lisberger?

HOROWITZ: He is our Obi-wan. We pitched him the movie and we always say, “he is the creator of this world and if he says this isn’t right, we can’t argue.”

KITSES: Steven built a sandbox and he let two kids come in there who wanted to play in his sandbox and he said, “great, here’s some toys.” He’s continued to be a sounding board. We went over to dinner at his house two weeks ago. He’s become a mentor to us. I couldn’t speak highly enough of him.

KITSES: He is Flynn and we realized why he responded to our story, because Carl, his son, is Sam. We really tapped into his life and we keep saying, “no, no, we’re you’re sons now.”

AX: Can you talk about LOST. You were part of it. It ended. Take yourself out of the equation, how did you feel about the final episode?

HOROWITZ: That’s an impossible question. Our experience of LOST was six years of sitting in a room with [showrunners] Damon [Lindelof] and Carlton [Cuse] and concocting the show. LOST to me has always been a writer’s room in Burbank and what we would talk about in that room. The finale was a really emotional thing for us that might be different from the audience. For me, it was, “this is the last time I’m going to work with this group of people together who we’ve worked with for so long.” I’m very proud of it.

KITSES: We knew we were building toward that ending. We were on it since Season One. To me, I watch the finale and see the clips and the emotion – that’s the way we all wanted it to end. I’m proud of how it ended.

AX: What’s your next projects?