Exclusive Interview: TRON: LEGACY director Joe Kosinski the helmer brings a visionary touch to the re-invention of the 1982 cult classic

The wait is over, TRON: LEGACY is finally here. The long-awaited sequel to the 1982 cult classic has been re-envisioned for the gamer age by director Joe Kosinski.

The film, which opens today (in 3-D and IMAX screens), continues the story of computer programmer Kevin Flynn (Jeff Bridges) who is trapped in a computer world he created and it’s up to his son Sam (Garrett Hedlund) to save him.

In this exclusive interview with ASSIGNMENT X, Kosinski spoke with us about bringing the classic film to life and the status on his next projects THE BLACK HOLE remake and OBLIVION. 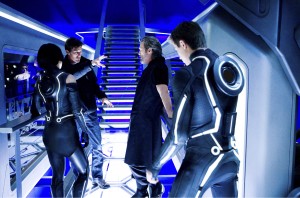 ASSIGNMENT X: Were you a fan of the original TRON as a kid?

JOE KOSINSKI: I think I saw it in the mid ‘80s on VHS tape and I remember it being completely unique and it looked like nothing else. I was a big STAR WARS fan and RAIDERS OF THE LOST ARK. That summer I was at E.T. rather than TRON, like most people. I remembered TRON being this unique vision and an odd movie. That was my impression of it as a kid, then when [producer] Sean Bailey called me in for a general meeting in 2007 and he brought up TRON, my mind went to that impression of something unique. It looked like nothing else and ahead of its time, and it’s that impression I wanted to bring to this movie and do the same thing in 2010. I don’t think it’s possible to push the bar as far as they did then. We tried to be innovative and we tried to push the story in ways that couldn’t be done before. 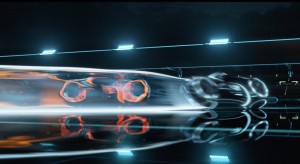 AX: It’s pretty cool that TRON: LEGACY can stand alone as well. What I liked is you enhanced the universe of the original movie.

KOSINSKI: My big thing was, I wanted to embrace TRON. Sean said to me, “in this post-MATRIX world, how do you go back to TRON? How do you up-MATRIX?” I said, “I don’t want to try to copy THE MATRIX. I want to go back to TRON and make it feel and look like TRON.” I wanted it to feel like we took a camera into TRON. I wanted it to feel real. I wanted it to feel physical. I wanted glass and steel and concrete and rock. I wanted the design and stylization of the world of TRON, but the material feels real, so the drama feels real. I didn’t want it to ever feel virtual with holograms and teleportation and being able to send messages. I didn’t even want telephones. It had to feel like a western when you got inside. Those kind of ground rules were the starting point. It’s about setting rules for the world and understanding how things function. There is a lot of background work you need to do even before you start to build this thing so it feels intentional and things work. That was my intent, and it’s hard to make things look photo-real, especially if you can’t actually shoot them on this planet. Every single frame inside the world of TRON, had to be created from scratch. There is not one location you could go to shoot this movie.

AX: I think one of the things that happened over the years with VFX, filmmakers got lazy by going, “let’s do what they did,” instead of pushing it to the next level like James Cameron does. That’s why I thought it was cool to have Jeff Bridges playing the villain Clu as a 35-year old version of himself via CGI.

KOSINSKI: There’s a risk in it. Clu is a very risky character. We’re trying to do something that’s never been done before. It’s the hardest thing to do, by creating a digital version of a human being and not only a human being we know, but one we know what he looked like at 35.

AX: There must have also been the concern of making the world like the FINAL FANTASY movie, where everything is so CG, you lose sight of the reality of it.

KOSINSKI: Jeff was a big part of it, but grounding it visually with things we understand. You can create this fantastic world, but you need some touchstones for people to grab on to. That’s why there’s weather and lightening and these kind of cues to the world we live in. Everything is just tweaked slightly. The idea is it’s a simulation to simulate our world the best we can, but it always has that twist to it to make it feel different. Obviously, the decision to build as many sets as we could helped ground it in a way. This isn’t like SIN CITY where they’re in blue spaces and you’re creating virtual things around him. When Jeff picks up that wine glass at dinner, everything around him is real and I think that informs his performance in a way.

AX: Is it cheaper to build this stuff vs. doing it digitally?

KOSINSKI: I think so, especially the Safehouse scene. If you know you’re going to be in a certain location for 15 or 20 minutes of the movie, even though the set may cost us X-amount of dollars. If you add up the 300 shots you’re doing in that space, and made them all VFX, it would end up being more expensive. There’s always this equation of “when does it make sense to build and when does it make sense to go digital?” From my point of view, I try to build whenever it’s possible.

KOSINSKI: It’s a tough thing to answer after two years of finishing something like this. It’s been a huge journey and an amazing experience. Fans like this movie and want to go back. If we get a story as compelling as this one and it pushes the envelope again to go even further, then yeah, I would be interested. 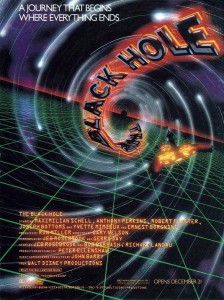 AX: You’re attached to OBLIVION and THE BLACK HOLE – is it race as to which one is going to go first?

KOSINSKI: We’re working on both of those scripts right now. We’ll see, once I get through the press of this film, I can sit back and think about which one I want to do next.

AX: In TRON, you’re doing a kind of a sequel and homage, but THE BLACK HOLE is literally a remake.

KOSINSKI: That’s a total re-imagining. I wouldn’t even say remake. The only thing I’m tied to is the concept of a black hole and a journey to the black hole itself is an exciting opportunity. Beyond that, I don’t feel any need to hold on to elements. It’s the concept I’m fascinated by.

AX: Are there any elements from the first movie you’re going to keep?

KOSINSKI: There are a couple iconic elements – the robots and the ship and a couple of characters are interesting places to start, but beyond that, it’s an opportunity to really reboot it.

AX: What’s the story for OBLIVION?

KOSINSKI: It’s a short story I wrote about a soldier who is the last man on earth, 25 years after a post-apocalyptic world and he’s a repairman who fixes drones on the surface. And one day, a ship crashes on the surface and it’s a woman from the past who lets him know that everything he believes is not as it seems. Bill Monahan, who won the Oscar for THE DEPARTED, is writing that and I’m really excited about that.