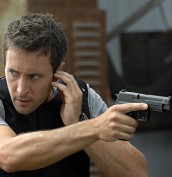 The former MOONLIGHT actor talks about working in Hawaii, teaming up with Scott Caan and why he thinks the new series works

HAWAII FIVE-0 has been very good to CBS. For twelve years (1968-1980), actor Jack Lord played Steve McGarrett, the head of an elite team of the state’s special investigations.

So it’s fitting that in resurrecting the franchise (an unsuccessful revival was attempted in 1997), the network would turn to an actor they’ve been very good to – Alex O’Loughlin. The Australian actor had previously starred for CBS in the short-lived 2007 series MOONLIGHT where he played a blood-sucker and in last year’s medical drama THREE RIVERS where he played a transplant surgeon.

The third time’s a charm though, as the rebooted HAWAII FIVE-0 has proven to be a breakout hit this fall (and the show has already been picked up for a full season).

Although the new hit show seemed like a sure bet in retrospect, there was some apprehension before HAWAII FIVE-0 debuted that it might not find its audience.

McLoughlin was among those most concerned after MOONLIGHT and THREE RIVERS for CBS failed to find an audience, and he feared that HAWAII FIVE-0 was being looked at as a referendum on his ability to carry a show. As it turns out, he clearly need not to have worried.

In an exclusive interview with ASSIGNMENT X, he opens up about the new show and his initial concerns.

ALEX O’LOUGHLIN: Well, three and out. What am I going to do? If this one doesn’t work, I think I’m going to go away and work in films or go back to community theatre or something [laughs]. First of all, I need to preface this by saying my gratitude for [CBS executives] Nina [Tassler] and Les [Moonves] and CBS is – I can’t explain it. It’s enormous. I’ve never felt more loved by anybody in a working environment or in a situation before. That being said, it’s really important to me personally and professionally that this show works,  because my nervousness before I said “Yes” to this show, when it was offered to me, was I would be the face of another show that didn’t quite go? And all the shows have been good – it’s a tricky thing. What do I know? I think [HAWAII FIVE-0] is good.

ASSIGNMENT X: You been quoted as saying you’d be bewildered if this show doesn’t go …

O’LOUGHLIN: I was kind of joking, but what I meant by that is that there is a science, but I could never work for a network in the business sector, because I have no idea what makes a success. I look at some stuff on TV and to me, it’s terrible, but lots and lots of people watch it. And I look at some stuff on TV and to me it’s fantastic, and no one watches it and vice-versa. So I don’t know what the recipe is. There doesn’t seem to be any rhyme or reason. I don’t know whether it’s seasonal or what it is, but I think HAWAII FIVE-0 has so much to offer so many different people – men, women, old, young, fans of the old show, newcomers – it’s just a cool show and I love the relationship between McGarrett and Danno, I love what we’re both doing with the characters.

AX: You and Scott Caan have a great onscreen chemistry together …

O’LOUGHLIN: We hit it off. We met a couple of times, we had a couple of mutual friends, but we really got to know each other on this. We’ve moved [to Hawaii] and we’ve become mates.

AX: How have you adapted to living in Hawaii?

O’LOUGHLIN: Really well. It was very difficult for me when I did the pilot – I was sort of cooped up in a hotel, I was working really hard and I was nervous about leaving all my friends. I’m already a long way away from home, being in the States, being away from Australia, but I’ve got a house in Hawaii now. It’s really special, it’s really beautiful. Oahu’s not that huge anyway, so even to cross the island doesn’t take that long, but it’s a very, very special part of the world and I’m adapting nicely [laughs].

AX: Do you miss anything about Los Angeles?

O’LOUGHLIN: I miss people, you know? It’s hard to miss anything about L.A. when you’re in a place like Hawaii, but I miss the little things – mainly I miss people, but [also] my little patterns, my little routines.

AX: Did you watch the original HAWAII FIVE-0?

AX: Does it feel like the new show has to do anything to differentiate itself from the original?

O’LOUGHLIN: I don’t think we feel like we need to do anything other than what we’re doing – we will stand out from the original. It’s [many] years later. I mean, you can’t look at any television that long ago [and compare it] with television now. There’s so many differences already, but I understand your question. I understand that it’s a more complex question than that – I just think it’s a good opportunity. We have enough in the show where we pay homage to the old show. We come at it with the grace and respect and integrity that we do, so that we can go off in a different direction, so that we can layer these characters in a different way that’s more conducive to modern law enforcement.

AX: How would you describe your character Steve McGarrett?

O’LOUGHLIN: [His sense of humor is] pretty dry. He’s a guy who’s grown up with a lot of guys – he’s spent a lot of time in the military, in close quarters. He’s the kind of guy that learned how to defend himself and his honor and the honor of his family and his friends with his fists very quickly and very young in life. He doesn’t take any shit. He understands irony and sarcasm when a lot of people around him might not and he gets the job done, regardless of what he has to do. And he’s pretty intolerant of people around him who see things differently, too. But there’s also something really lovable about him. He’s kind of a classic Leo. I don’t know what his star sign is, but if you’re in with him, he’ll die to protect you.

O’LOUGHLIN: I have a gun.

AX: You have a gun and you’re very physically adept. You kick and jump and don’t kill yourself in doing these things. Do you relate to being that physical or do you just get cast as somebody who’s very physical and then train like crazy? 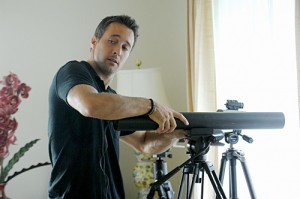 O’LOUGHLIN: I loved THREE RIVERS so much and I worked really, really hard on that. I did a lot of research. Also, the great thing about THREE RIVERS is that I got the opportunity to forge the relationship that I have with Donate Life America [an organization that deals with organ transplants], which is one of my main charities now. I’m an ambassador and spokesperson for them, and I love them very much, and that’s the greatest thing that came of that show for me, is the opportunity to kind of be of service somewhere. I felt it was a longer shot, because of the nature of it – how do you tell a story every week a hundred times? How do you do it about organ transplant at a hospital that hasn’t been done already? So this is a bit different. The guts of the show is McGarrett and Danno. We can always watch that. If you love two characters and what happens between them, that can develop into anything forever, so that’s where my confidence comes from.

AX: Anything else we should know about HAWAII FIVE-O at present?

O’LOUGHLIN: I love the writing behind this show, I love the talent and also the creatives behind this show. I think it’s a great pool of talent and like-minded people who have come together and I just have this feeling like, tune in and take a look. It’s got a great crime element, it’s got a great comedy element that we didn’t realize was in there as much as it is, and that comes from the great character element, and so I just really think that this is going to be a show that everyone enjoys.