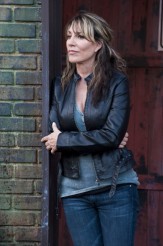 SONS OF ANARCHY revs up for its Season Three finale tonight on FX (it’s already renewed for a fourth season) and the series finds the SAMCRO motorcycle club unofficially holding sway over the little town of Charming, California, dealing weapons when they’re not dealing with internal strife. 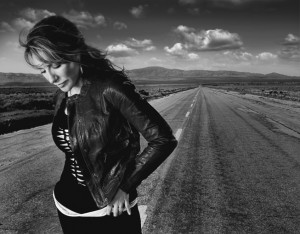 This includes tension between Jax Teller, played by Charlie Hunnam, and his stepfather Clay Morrow, played by Ron Perlman, who took over as SAMCRO leader after the death of Jax’s father John. Clay is now married to Jax’s mother Gemma, played by Katey Sagal and she’s a steely woman who will do anything for her family.

SONS OF ANARCHY is a family affair behind the scenes as well, as Sagal is married to series creator/show runner Kurt Sutter. With the finale almost here, ASSIGNMENT X caught up with the couple to ask about what it’s like collaborating on such an intense series.

ASSIGNMENT X: Is working on SONS OF ANARCHY the longest at this point that the two of you have collaborated together?

KURT SUTTER: Yeah, I think so.

KATEY SAGAL: Other than having children [laughs].

SUTTER: Yeah [laughs], other than family.

SAGAL: Other than life.

AX: Is the collaboration getting easier or harder or just different as the show continues?

SAGAL: It’s never really been hard. Our schedules and what we do are kind of different. We get to see each other more, actually, because his office is on the lot.

SUTTER: We figure it out.

AX: Is SONS OF ANARCHY developing the way you expected it to, or did you think at the outset that if it did go three seasons with a fourth upcoming, it would be in a different direction entirely?

SUTTER: No, I think it’s pretty much following the paradigm that I’d intended. I always wanted to take them to Ireland in Season Three and talk a little bit more about the history of the club and the history of [Jax’s father] John Teller and I feel like people are invested enough in the show that they care enough about the mythology, so they’re curious and they want that kind of back story. I feel good about where we’re at.

AX: At the outset, there was kind of a HAMLET vibe to the story arc with Jax coming home to find his father’s partner had married his mother and was now head of SAMCRO. Will we return to the HAMLET analogy?

SUTTER: I don’t think it was so much about the story of HAMLET, as much as the archetypes in terms of the characters. So we got to see a little of that, and that paradigm will always continue to exist. I think as we get further on, if we’re lucky enough to keep telling the stories, as we get towards the finish of this, we will then begin to go back to that paradigm a little bit, but we don’t look at it from an episode to episode point of view.

SAGAL: You know, the actual act of the first episode was not physically that difficult. Emotionally, it carried through the entire season. So I don’t know if “hard” is the right word. I had to remain aware and it was very introspective and I had to track her, where she was emotionally, because she was going through lots of different things. So “hard” is just the wrong word. I would say “intention.”

AX: Did it get more intense as you had to carry it through?

SAGAL: Some parts did, certain parts didn’t, just as in life. You know, she’s a character that lives in a lot of denial. Not that she was ever in denial about what happened to her, but I think she’s good at covering things. So there were moments when she was covering it up, and that was uncomfortable. 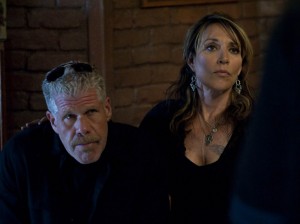 AX: Are you easily able to drop it after “Cut” and go home?

SAGAL: It’s not so easy. Because what you see on television – three episodes takes a good month to shoot. So the first three or four [Season Two episodes], it was like a two-day period, two or three-day period. So it kind of had to linger on and yeah, it was difficult to leave it.

AX: Did you ever think, “Okay, this is kind of coming home with me …?”

SUTTER: Well, we had a lot of discussions. I let her know early on, when I knew, “This is what we’re going to do,” just so she could begin to prepare and do the work that she needed to do.

SAGAL: We don’t necessarily bring our work to our family life. I’m an actor and I rise to it – I’m pleased to have a challenge. So I knew I was acting.

AX: So far, SONS OF ANARCHY hasn’t gotten Emmy recognition, but it gets a lot of fan and critical acclaim, but you are big favorites with the Television Critics Association as far as award nominations.

SAGAL: The fact that they recognized us and singled me out was really awesome. I felt really proud of that. I’ve been at this a long time. All of it plays an important part.

AX:  Is working on FUTURAMA for Comedy Central any different than when it was on Fox or is everything pretty much the same?

SAGAL: Oh, I think it’s better [laughs]. They’re doing, they’re writing great scripts and the shows are hysterically funny. I mean, it was good on Fox, too. I think it’s good wherever you put it. It’s a good show.

AX: Do you know yet when SONS OF ANARCHY Season Four will air?

SUTTER: I’m not sure. I think we’ve had a lot of success with it premiering early September, so my sense is that they’ll probably try to do the same [next year], but they never know, really, until we get closer.

AX: Anything else you’d like to say about SONS OF ANARCHY?

SUTTER: You know, I don’t think so. It was a great season, we’re thrilled about the ratings and the fan base and hopefully everyone will come back for next season.