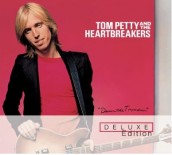 It’s hard to grasp that the first two Tom Petty records – 1976’s self titled release (featuring “American Girl” and “Breakdown) and 1978’s YOU’RE GONNA GET IT! (featuring “I Need to Know” and “Listen to Her Heart”) – were not commercial successes in the states.

The U.K. loved the band, but despite those great songs, they struggled to find a stateside audience.

That’s why so much was riding on 1979’s DAMN THE TORPEDOES. In many ways, this was make or break time for the band. No matter how good they were, they still needed to sell records.

And of course, the rest is history since TORPEDOES shot out of radio and record players everywhere with a timeless urgency. With a sprite nine tracks, it was quick, efficient and heralded in the age of Petty’s wordsmith magic and the incredible musical camaraderie between he and the Heartbreakers.

TORPEDOES is a rock record through and through – unfiltered by trends or styles of the era, and this brand-new 2-disc DELUXE EDITION reminds you of how forward-thinking the band was and how tight a group they were to be able to conjure up such a near-perfect line-up of songs.

The album kicks off with the now classic “Refugee” – featuring one of the most memorable guitar licks of that era. It also has some amazing lyrics including “somewhere, somehow/somebody must have kicked you around some/Tell me why ya wanna lay there and revel in your abandon.”

Great stuff, but it doesn’t end there. “Here Comes My Girl” features Petty having spoken word/half singing the song, but when that Byrds-esque chorus kicks in, the song soars to amazing heights.

“Even The Losers” feels a bit autobiographical for Petty with the chorus, “Baby, even the losers/get lucky sometimes.”

Side two has “Don’t Do Me Like That,” an older song from Petty when parts of he and the Heartbreakers made up the band Mudcrutch.

There’s very little filler and almost all rock on this album, save for the album’s beautiful closer “Louisiana Rain.”

According to the liner notes, many of the tracks on the album contain no edits of takes – they’re all live in the studio.

Of course, it wasn’t easy to perfect that kind of sound.

My favorite song of the bunch is one I’ve known for years as the under-appreciated B-side “Casa Dega.” At the time, Petty and his band really saw themselves as rockers of the first order. The folky-ness from Petty’s roots would occasionally seep through, but one can see with the B-sides why the softer songs that emerged from the session were left off.

It’s a shame for “Casa Dega,” since it’s an A-side all the way. It would have been a great complement to the album, but strangely, it’s so foreign (to this stage of the career) and so well produced, you can only assume it went against their image at the time.

Make no bones about it, producer Jimmy Iovine and Petty kicked major ass on this one. It’s such a beautifully composed number and the lyrics about the Florida town are haunting: “Baby fools pay the price of a whisper in the night in Casa Dega/Time Rolls By, night is only night, cannot save you.”

No one writes them like Petty. Also included is an alternate take of “Casa Dega” – a little less produced, a little more rockin’ and just as good. It makes you wonder what other outtakes are lying on the floor.

Two previously lost cuts that were recently found are also presented for the first time on disc – “Nowhere” and “Surrender.” The band cut a new version of “Surrender” for a best-of compilation a few years back, but it’s great to hear what the original version sounded like. “Nowhere” is also a solid song, though it sounds more like later-year Petty than what he was working on here.

Additional tracks include the other B-side “It’s Rainin’ Again” (nothing special) and solid live cuts of “Don’t Do Me Like That”, the Eddie Cochran hit “Somethin’ Else,” and “Shadow of A Doubt (A Complex Kid).”

Wrapping up the album is an alternate take of “Refugee” – again, sounding a little rawer and faster than it does on the finished album. Plus, it transposes some of the lyrics and it does make a big difference. Sometimes tinkering in the studio is essential in coming up with the perfect album, which is the case with DAMN THE TORPEDOES. Because, as Petty sings, “even the losers, get lucky sometimes,” and in the Heartbreakers case, deservedly so, they got lucky again and again.