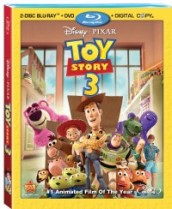 Even when Pixar is producing sequels to their hit films, they manage to do things right.

First, they had the unenviable task of following up their first full length feature TOY STORY with TOY STORY 2 and (surprise) exceeding all expectations. Now, 11 years after the second round-up, they’ve finally produced TOY STORY 3, which could have come with that “third film curse” that plagues many franchises (RETURN OF THE JEDI, ALIEN 3, SPIDER-MAN 3 and so on).

Instead, the challenge of creating a movie that is just as good if not better than the first two (without feeling like a complete sell-out) has reinvigorated the Pixar animation team. Their efforts to extend beyond their reach to infinity and beyond has produced another wonderful, timeless classic. It holds its own as a standalone film (though it helps to be familiar with the original) and it also comes full circle.

There were many wet eyes in the theater when the film was released this summer, and there will be many wet eyes watching this movie at home as the story deals with the universal theme of “change.” It works incredibly well – first as an emotional journey of a young boy growing up, secondly as an animated action adventure and third as a very funny and pop culturally savvy film loaded with winks and nudges to all the things we used to play with as kids.

TOY STORY 3 begins with Andy all grown up and heading off to college. His mother wants him to donate some of his toys – he prefers they go into the attic, while still planning to bring mainstay cowboy toy Woody with him.

Of course, the toys get themselves into big trouble when they’re accidentally taken to Sunnyside – a day care place for retired toys (for lack of a better word). Things seem bright for the toys, until they realize the patriarch of Sunnyside is Lotso Huggin’ Bear – an imposing figure who “smells like strawberries” and uses new toys as sacrificial lambs to the younger, undisciplined tots.

It’s like a war zone, and Andy’s favorite toys are now destroyed and mutilated in the process.

Along the way Buzz gets reprogrammed (twice), Woody has to come to terms with moving on himself and every character gets a chance to shine one last time.

The movie begins with an exceptional and fantastical western-themed action sequence and concludes with an impressive (and harrowing journey) in the junkyard as they’re all headed for imminent destruction.

Yet, for all its bells and whistles (remember the 3-D  in theaters), it’s the emotions that stick with you. Andy saying goodbye is one of the most honest and emotional moments you’ll find in any film all year (heck, for the last three years). It’s heart-wrenching, yet the good folks at Pixar were smart enough to offer up an upbeat epilogue so kids aren’t sent into a depressive fit after it’s all over.

Voice work is exceptional, particularly Beatty who brings a New Orleans drawl to Lotso. He’s great, as is TOY STORY newcomer Michael Keaton as fashion-conscious Ken who finds his life-mate with Barbie.

This is where Pixar rises above all other companies when it comes to home entertainment releases. What could just be boring featurettes with talking heads are transformed into informative entertainment that are just as enjoyable as the film itself. Plus, there’s tons of fun stuff as well.

You get the clever short subject NIGHT & DAY;  a Buzz Lightyear Mission Log that educates kids about how sending astronauts into space can help us with science; a featurette on the returning (and new) voice talent; and three “animated” STUDIO STORIES that showcase some of the quirkier things that happen at the Pixar headquarters.

As is standard for these kid film releases, there’s a game in the form of TOY STORY TRIVIA and commentary from director Lee Unkrich and producer Darla Anderson. What’s great about the commentary on the Blu-ray is how interactive it is. You’ll see storyboards popping up in the upper part of the screen as the filmmakers talk, you’ll see photos, interview clips – you name it, it’s there. It adds a whole other layer to the concept of audio commentary.

The making of the film is spotlighted with some very informative features. We get a taste of the alternate opening to the film, which was a more somber Wild West setting as mysterious stranger Woody comes to town to have a showdown with Buzz. It was wise for them to go off in a more action direction, since this doesn’t pack the punch that’s needed when you’ve waited eleven years to see all your favorite toys back in action again.

Screenwriter Michael Arndt gives an incredibly informative discussion on what makes a great script – using TOY STORY, FINDING NEMO and THE INCREDIBLES as templates. The segment is animated and breaks down those stories into three acts. It’s the best screenwriting course you never have to pay for, and it’s broken down in less than 8 minutes. Watch it and learn exactly why Pixar is so awesome when it comes to story.

Additionally, there’s a featurette on what it takes to edit animation and another great one on the development of the toys themselves (and how Pixar made a movie about toys and ended up creating toys in the process).

Perhaps the coolest bonus feature of all though is a faux 1980’s retro commercial for Lotso Huggin’ Bear. It was made specifically for the Blu-ray (and for promotion of the movie). They even made it look like it came off of an old VHS tape from the 1980s and they even managed to make a Japanese version of the commercial too.

As is par for the course for Disney releases, you end up with four discs total. Two Blu-rays, one DVD and a Digital copy you can download and carry with you on your portable devices.

For anyone who grew up loving TOY STORY (or remember seeing it for the first time), TOY STORY 3 delivers on all cylinders. It’s a great film and deserves to be nominated for Best Picture (not just Best Animated Picture). It’s smart, funny and touching. It’s something no live action film could say they achieved this summer (well, maybe INCEPTION came close), and something that few animated films (outside of Pixar) ever come close to reaching. It’s perfection, and that’s one of the rare words you’ll ever hear coming from the mouths of the writers here at ASSIGNMENT X.