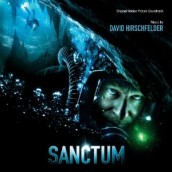 When I hear a score that’s as unabashedly huge as SANCTUM, I’m reminded of the recent, end-of-an-era passing of John Barry- a composer unafraid to swim in waves of lush melody, always writing music that would be heard loud and beautifully clear over even the most effects-filled soundtrack. While I’m not saying that David Hirschfelder is in that composer’s league, his symphonically bursting score for SANCTUM packs that kind of melodic ballsiness, even if there’s zero romance to be found in this delightfully cornball, testosterone-filled movie where a bunch of fellow Aussies spend as much time screaming at each other as they do trying to navigate their way out of a cave system that would give Jules Verne pause.

And Hirschfelder’s uncompromisingly thematic score is there every step of the way, pummeling its way through the constant din of dripping water and sonic booms of falling stone. It’s a musical SANCTUM that’s a workout in the idea of writing to the rafters, but with an intelligence that never makes this mother of all cave diving scores crash into swooning macho cheesiness.

Whether it’s the England of ELIZABETH, the haunted flashbacks in THE WEIGHT OF WATER or the owl kingdom of last year’s unsung LEGEND OF THE GUARDIANS, David Hirschfelder’s music has a powerful way of taking us into new, mysterious worlds through his fusion of orchestral and ethnic rhythms. It’s a combination that starts SANCTUM off on exactly the right, inviting notes as “A Sacred Place”’s opening swell of didgeridoo, Aboriginal voices and strings set up a melody of ancient mystery that Whitey is sure to screw with.

And just as quickly, Hirschfelder introduces his second major theme with “Espiritu Esa Ala,” the orchestra’s brass rotoring us to the cave, complete with that stalwart, spectacle-inducing rise of the orchestra for the reveal of a gigantic black mouth punched into the New Guinea rain forest. All is rousing, happy happy joy joy for a while with “The Doline” and “The Dive” as Hirschfelder once again slams the theme home with a native chorus, strings and a mix of ethnic and western percussion. While these might be danger junkies rappelling down rock as opposed to Robert and Meryl flying over the African savannah, the composer gets across that same, swooning rush of jumping into undiscovered territory.

But as they enter a space the size of “Saint Jude’s Cathedral,” Hirschfelder’s bright voices start sensing that things will become very dark indeed, though not quite yet as harp glissandos establish a shimmering atmosphere that brings on another musical metaphor to traveling in Captain Nemo’s submarine. Then with alarmed bursts of percussion and electric guitar, it’s off to the danger races, and the beginning of SANCTUM’s body count as an eerie sustain and mournful theme introducing nature as the ultimate slasher. Suddenly, all of the musical elements that Hirschfelder was at first playing nice with turn against our divers to ominous, and always exciting effect. Hirschfelder dumps water with grand, throttling symphonic runs in “Listen! The River is Returning,” while “Flow Stone Falls” hits clanging orchestral panic, using Glass-ian repetition for his orchestra to lay down breathless, heroic beats.

Now sealed away from their home base, the rest of Hirschfelder’s score becomes an increasingly desperate, inch-by-inch struggle for musical survival. Music howls wildly, the brass grows with militaristic determination, and the action swings about at points with the anticness of animation scoring. Lots of things happen in Hirschfelder’s score, restraint rarely being one of them. But that’s just dandy for SANCTUM’s adrenalin rush, especially given that he’s constructed his work just about as well as this millennia-old cave system.

For like Barry, theme and melody are the vital components of SANCTUM’s score, with every seeping, crazed movement given us a familiar sense of where we’ve gone before, and the excitement of just where it’s going to venture next as we squeeze through the cave system- a thematic swell sure to be around the next stalactite.

Unlike some other equally successful theme-driven scores that don’t know when to stop, Hirschfelder’s inventiveness keep the momentum fresh, interesting and emotionally varied, whether the vibe is danger, or the somehow blissful feeling of mate’s sacrifice. Better yet, Hirschfelder doesn’t feel the need to the journey into small chunks. There are many nice, luxurious stretches in SANCTUM, like a seven-minute journey “Through the Restriction,” a cue whose aura of unearthly majesty for voice, subtle electronics and strings would be just as home aboard a space ship approaching another planet – which is certainly the idea for divers going where no man has gone before. Even the ample 67 minutes on this soundtrack doesn’t give you a clue as to how Hirschfelder seems to fill nearly every wall of SANCTUM with a sense of near-hypnotic discovery.

By the time you finally emerge into the light of day with the “Sanctum Suite,” Hirschfelder’s riveting, exhilarating and often haunting score makes you feel like you’ve truly been to some bold musical place, namely back to the primordial days when thematic soundtracks were all about serving up something familiar, and something new in walloping doses. SANCTUM’s score gets in your face with its grand feeling of cross-cultural wonder and death-defying adventure, with Hirschfelder’s music as the torch that leads the way, its heat of excitement always in your face.

Journey to SANCTUM’s center of the musical earth HERE