The actor talks her role on the sci-fi series 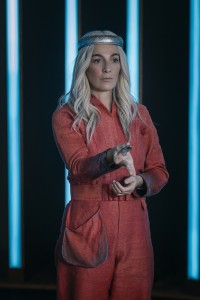 MOONHAVEN is a science-fiction series on AMC+ that premiered July 7, with new episodes debuting on Thursday nights. Created by Peter Ocko, MOONHAVEN is set one hundred years in the future, when humans have established a seemingly idyllic colony on the moon.

Ayelet Zurer plays Maite (pronounced “mighty”) Voss, leader of Moonhaven’s council. Zurer, originally from Israel, has a film and television career that has taken her all over the world. She worked with director Steven Spielberg in MUNICH, played the lead in the series LOSING ALICE, starred opposite Tom Hanks in ANGELS & DEMONS, and was Vanessa Marianna in Marvel’s DAREDEVIL series.

Speaking by phone, Zurer discusses her role in MOONHAVEN.

ASSIGNMENT X: You work a lot in both the U.S. and in Israel. Are you based in one or the other at the moment, or do you just go back and forth depending on where the work is?

AYELET ZURER: I’ve been living in Los Angeles for the past sixteen years, and I still work all around the world.

AX: How did you come to play Maite Voss in MOONHAVEN?

ZURER: Actually, I got called for a different role, and read the script, and I said to my team that I feel like Maite is the role that called to me, and I read for that one. I still had to read for the other role, and then they figured that I was right, and they actually gave me Maite. So, I was very lucky. The minute I read [the character] and read the scenes, I fell in love with her. I knew this was the right thing for me.

AX: Who is Maite? What does she do in Moonhaven?

ZURER: Well, she has never been outside of Moonhaven. She’s definitely Moonhaven, period [laughs]. She is an empath, a teacher, art collector, historian, Council chair, and the holder of one of the keys to I.O., which makes Moonhaven what it is. So, it’s a very important role [in Moonhaven society], and a critical role in the storyline, as well.

ZURER: Yes. I.O. is the creator of Moonhaven, which is a whole atmosphere on the moon that has created the nature there. But beyond that, it’s also an artificial intelligence that’s connected to everyone on the moon. And so, it’s also a consciousness.

AX: Is Maite helping or hindering Bella and Paul, or Tomm Schultz?

ZURER: I think the storyline is so complicated and complex and beautiful, that to get the answer, people need to watch the show. I can say that she’s very wise, but naïve at the same time, and she’s meticulous but intuitive. She’s somewhere between Yoda and Oprah, I guess [laughs].

AX: That’s a great character description. You say Maite is art collector. Is it art from our present, or is it something new created for MOONHAVEN?

ZURER: So, basically, when I say art collector, I could say historian, because her quarters, where she lives, is like a history gallery, like the Borghese in Rome. She has artifacts from all over the world, but it’s as if she learned human nature and humankind through art, through history, but never experienced what it means to be from Earth, because Moonhaven is such a different culture [in] so many aspects. [The inhabitants] speak their minds, they are not sentimental towards any emotional feeling; they have to go through a bad feeling to be back in the good space. They have a beautiful line in the show. It goes, “You have to go through the dark, because you are the light.” So, in a way, the way to understand humans from Earth – she’s human, but she’s not from Earth – is through history and art and studies of what we are.

[Maite] appreciates everyone and everything, but she also says – there was a line that was in the pilot, but it ended up not in the pilot, I think they had to shorten it –about human beings, “We are forever dissatisfied with what we want, and that makes all the difference.” Human curiosity drives humanity forward, but greed will always take us back. In some ways, that’s what she’s saying, and I think in some ways, the show is about that.

AX: Did you have any input into Maite’s environment or her look?

ZURER: Actually, I did. Because Maite is supposed to be the leader of Moonhaven, because she’s the Council chair, and the holder of the keys to I.O., she is supposedly someone who needs to look that way, but I argued my point, which is, on the moon, we don’t have class, we are all very similar. That’s why people are not called “police officers,” or “doctors,” or “lawyers” – they don’t have lawyers, but they don’t have professional [titles]. She is the Council chair, she’s named that way, but without the quantifying aspect of it, better than others or something like that. So, I argued that my outfit would be very simple, like everybody else, like a working overall, particularly in the beginning. I persuaded the team, and Peter also agreed with me, and was very happy about that choice eventually. Later on, you realize more and more what her power is, and how she’s responsible for Moonhaven, but it’s not through the clothes or any [symbols of office].

AX: Where did you shoot MOONHAVEN?

ZURER: We shot MOONHAVEN in Ireland, which I completely fell in love with, not only the place, but also the people. [It was] one of the nicest, best experiences of my life. We had amazing actors. We were really isolated, because we shot during COVID, so we had to be either friends or drown. And so, we became really close friends, and I had a tremendous time, specifically with Amara [Karan], who is playing Indira. We swam every day in the cold water of Ireland, we hiked, we spoke about the script and our opinions. We had really a great time. Emma was fantastic. She worked really hard on it, because she’s pretty much in every scene. Peter wrote an amazing show, I think, and it came out beautifully, if I may say so.

ZURER: Both. I think as a foreigner, it’s easier for me to get a job [in North American genre projects], because it tends to lend really well to certain characters. But I’m also a fantasy lover and a sci-fi lover, because I feel like, if it’s well-written, there’s always an existential aspect to it, which I normally like.

AX: MOONHAVEN has a big ensemble cast. You were Alice in LOSING ALICE, so you were the lead there. Do you have a preference between playing a leading role and being part of an ensemble?

ZURER: To play a leading role is not an easy thing to do. It’s really intense. So, when I got the chance to be in MOONHAVEN, I was actually in some ways happy and relieved, because I wasn’t meant to work all the time, carrying the thing on my back. [Playing the lead] actually can be very stressful. But on the other hand, it’s been a great challenge. I think it’s great to do both, because [as part of an ensemble] you can get to rest and to do other things in your life while other people are working, and the next thing, you might do the lead again and work your ass [laughs], and look at all the people who are having fun and having some time to swim in the Irish Sea, and you can’t do it. But then, you also get to be very creative. So, both of them are fantastic. If you get lucky enough to do them both, then tell me where to sign, I’m going to sign it.

AX: What did you learn while working on MOONHAVEN?

ZURER: Oh, gosh. I had a really special time there in Ireland, because I had time between my scenes, because they’re spread out, and we couldn’t go back home, because it was COVID time. So, I was walking around in nature while I was reading books about nature, because I felt like this was partially going to put me in Maite’s space, so I read amazing books like THE SECRET LIFE OF TREES, and HOW MUSHROOMS SAVED THE WORLD, and all kinds of strange things like that [laughs]. On a more special level, because Maite and the whole team were working together, because they really only have each other, they didn’t have a family – everybody who came from other places, we became really close friends, and working together really made the show for me, and also showed me how this is the best way to work in supporting one another, regardless of which role and how you see the role, and the show. Just truth and friendship are important.

AX: Was there anything you had to learn how to do in order to play Maite?

ZURER: There were some songs that I had to learn, one song particularly. A broom dance, which was created [for the show]. The basic idea was to have a meditation session, and I don’t know why – I saw something on YouTube that [prompted Zurer to suggest a broom dance to the creative team], and they loved the idea, so we created a broom dance. That was really fun. And the language. There’s a funny and strange language that is crafted for the show, so certain words – “craze” is emotional stress, and there’s “sizzle” if you’re excited or in love, just poetic language. So, to work through this, while also lending the idea of the meaning of what we are talking about was a challenge, but a good one.

AX: Is MOONHAVEN designed to be ongoing, or is it closed-ended?

ZURER: It’s supposedly ongoing. I believe Peter meant for this [first season] to be the exposition to this whole storyline that he has in the back of his mind [laughs]. I’m really hoping that we’ll get to tell the rest of it, the beautiful continuation for this story.

AX: And what would you most like people to know about MOONHAVEN?

ZURER: That it is a unique world, unique language, with a beautiful story that evolves and becomes something very surprising and worthwhile. I personally enjoyed watching it. Normally, it’s very hard for me to watch things that I’m in, and I watched this, and enjoyed it.