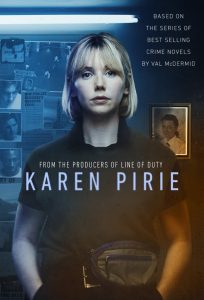 Karen Pirie is a young police detective who is the protagonist in a series of mysteries by bestselling Scottish novelist Val McDermid. Emer Kenny has now adapted the books for British television in the ITV series KAREN PIRIE, starring Lauren Lyle in the title role.

The first season of KAREN PIRIE is now available in the U.S. as three ninety-minute episodes on Britbox. The story moves back and forth between 1996, when a young Scottish barmaid is murdered, and 2021, when Karen is put in charge of a cold case squad investigating the still-unsolved crime. The situation becomes more difficult when a new incident has links to the past.

Writer/executive producer Kenny plays Karen’s best friend and roommate River Wilde in the show. In a Zoom conversation, Kenny discusses the evolution of KAREN PIRIE, as well as her own dual careers as creator and performer.

ASSIGNMENT X: How did you become involved with KAREN PIRIE as a television project?

EMER KENNY: Lennie James from THE WALKING DEAD wrote and acted in an amazing show over here [in the U.K.] called SAVE ME. I was writing an episode of it, and the production company said to me, “We’ve got this series of books about a young female detective, set in Scotland. Do you want to have a look at it?” Because they knew, as a young female writer, that I was a similar age to the detective, and I might bring a fresh take to the book.

So, I read it. In the first book, Karen comes in right at the end. She’s definitely not the protagonist. She’s quite instrumental in the story, but she doesn’t lead it. [The production company] said to me, “Well, you could start with the second book, or you could do this one.”

And I loved the central story set at the university around a group of friends who are involved in a really tragic happening. And I also loved that [this] is a kind of prequel to the KAREN PIRIE series of books. Karen becomes the lead, but at this point, she’s massively underestimated and undervalued, and no one expects her to be able to solve a case. I really related to that as a young woman, and so, I took that book on. It meant that we had to change a lot of it, because she’s not the protagonist, and we need to make her the protagonist. But I’m really glad we did it, because I think it’s a great set-up for a possible future of her solving crimes, where you see her come into her own power. 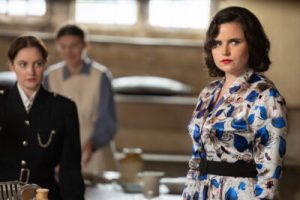 AX: What is the first book in the series, the one that your first season of KAREN PIRIE is based on? And if Karen isn’t the protagonist in that book, who is?

KENNY: It’s called THE DISTANT ECHO. In the book, the first half is set in 1978, and it’s actually all told from the perspective of one of the suspects. And then the second half is set in 2004, and it’s a slight spoiler for me to tell you about that part of the book, but it’s told in a very different way, and it is another person who’s the protagonist. Karen ends up on the case, but she’s a kind of background character, although she becomes really important. And so, this series is really a remix of all of that. The central story and the central elements of Karen are very similar, but it’s definitely been changed for screen. I spoke to Val a lot about that, and we worked it all through, and she’s really happy with what we came to.

AX: Was it intimidating to be adapting material that is so well known in its original form?

KENNY: Absolutely. And it’s difficult, because you know that a huge swath of people who are watching the show haven’t read the books. So, you need to be aware of that TV audience who are just coming to it new, and you have to make sure that it sits in the TV landscape as something that stands on its own two feet. No one in that audience had any experience with KAREN PIRIE before.

But then, at the same time, I really wanted to make Val proud, I wanted her to love the show, and I wanted her fans to love the show. And so, I wanted to make sure I ran everything past her, and we agreed on any of the changes I was making. So, it was a real balancing act, where we were just trying to stay true to Val’s vision, and also bring elements of myself to it, and also try and make sure that it was going to work well for a brand-new TV audience. So, it’s an obstacle course, adapting something that people really love. But at the same time, it brings amazing things. It’s got an amazing audience already, so you hope that they will jump on board and love it.

KENNY: I wouldn’t say there were issues. There were definitely challenges, because obviously, the way that the crimes were solved in 1978 and 2004, they’ve changed. In 1978, there was no DNA evidence, but in 1996, when I moved the story to, there was, and sometimes you need obstacles, like no DNA evidence analysis, or no mobile phones, in order to keep a story from progressing too fast. So, I had to recalibrate a lot of the crime-solving.

And I also felt like I had to find things that were rooted in the now, so that elements like the podcast, elements like the genetic genealogy that comes in, in the second episode, where they analyze some DNA and try and find a person using it. All of that stuff is very modern, and that was all added, because of not being able to do exactly what was in the book because of the timelines.

AX: You’re originally from London, England; the show KAREN PIRIE, the characters, and the setting are all very Scottish. Were you already familiar with that part of Scotland, or did you have to familiarize yourself with that or anything else in order to do the adaptation?

KENNY: Well, I’m half-Irish, and I’m half-Welsh, so there’s a very Celtic element to my background. There’s a kinship between the Celtic nations, Scotland, Wales, and Ireland. For example, the series opens with a football match between Germany and England, and all the Scots are supporting Germany. That kind of attitude very much comes from being British, but not being English, and I think that that aspect to my upbringing and background helped me understand the Scottish mindset [laughs].

But I also have spent a lot of time in Scotland. I’ve done a lot of filming there of various TV shows in my career. I wanted to be true to it, and I really wanted to make sure it felt authentic. So, I went up there as soon as I’d read the book, and walked around all of the places that are mentioned in the book. We had a Scottish producer, we had an entire Scottish crew, the cast is almost completely Scottish, with the exception of maybe two or three people. And so, whenever anything felt like it wasn’t authentic to being Scottish, there were a lot of people around to correct that, or find the right word, or give the right feedback.

AX: Is River Wilde, the character that you play, a character in the books?

KENNY: Yes, my character is, but she doesn’t come in until, I think, the second or third book. I read the whole series, and then pulled lots of characters who come in later into the first [season] to support Karen and fill her out as a character. 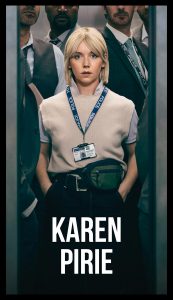 AX: Is River just Karen’s friend, or her roommate?

KENNY: I think she’s both. She’s Karen’s best friend, and they live together.

AX: Having written the role of River for yourself, are there things that you put in or took out, or thought, “Oh, I can just give this to someone else”?

KENNY: I didn’t write it thinking I was going to play it. Because I find it quite hard to write a character thinking I’m going to play it. I think it’s better to just leave the door open, and just see what happens. I wrote it as what I thought would be a good character, and what we needed, and I wanted to have a female friendship at the heart. But once I met Lauren, I knew that me and her and our sense of humor, and the way that we would read those lines, would work.

I think the hardest part about it was when you come to the edit, and you know that things have to go, and you are in a scene, and you have a bunch of lines you really like, and the director and other producers are saying, “We don’t need half of this scene, and we’ve got to cut some time, so it’s going.” And obviously, with anyone else, you’re completely fine with that. When it’s your own work, that’s when it’s slightly more bittersweet. You’re like, “Oh, God, no, I love that scene.” But at the end, you have to serve the story, and you have to think bigger picture, and you have to keep the pace up, so I had to say, “Yeah, fine.” But that was a learning experience [laughs].

AX: Are you primarily more an actor or a writer at this point? And do you wish you were doing more of one or the other?

KENNY: I really am half and half. I have been really lucky over the past fifteen years for both of those things to kind of run alongside each other. So, for KAREN PIRIE, I’m more of a writer, and then I have a smaller [acting] role, and then I’m doing another show called THE CURSE, which is coming to Britbox as well soon, where I’m much more of an actor in it, and then in Season 2, I’m going to write an episode, but [being an actor] much more the role I play in that show.

And I really do love both. I find writing extremely hard, and extremely challenging, because I find being on my own in a room, for months at a time with a script, agonizing and very lonely. But ultimately, it’s so rewarding when you get to release a show, and people react to it. Whereas I really enjoy the action of acting. I love being on a set, and I love collaborating with people, and disappearing inside a character, and getting to do comedy, and making people laugh. I love that, and so, to be honest, I really can’t imagine ever doing one without the other. They really balance each other for me, so I hope that I can keep going, doing both for as long as I can, and also combining them on the same work, because that’s always really rewarding as well.

AX: And what would you most like people to get out of KAREN PIRIE the series?

KENNY: I think by the time you get to Episode 3, there are some really moving scenes, with some of the best acting I think I’ve ever seen on a set, that I was there for, that had us crying at the monitors. I really want people to be swept away by the story and be wowed by those performances, because I think that they are remarkable, and I’m really proud of them. So, that’s what I hope. I hope everyone gets to Episode 3.