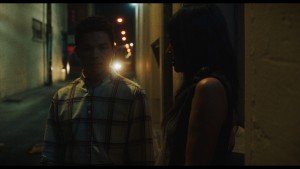 Camden is the reserved tutor of an uninhibited Saudi princess (Paulina Leija). Camden has no social life outside of his duties, so he’s completely disarmed when gorgeous (if slightly older) Anna, played by Tamara Taylor, approaches him at a club. The two genuinely bond, to their mutual surprise.

What Camden doesn’t know is that Anna is a spy who has been sent by her handlers to seduce him. Then again, Camden has some secrets of his own.

Like Camden, Noi is English, although the actor’s real speaking voice is different from that of his character. Noi’s previous screen credits include the films SEAMONSTERS, K-SHOP, BLISS!, AWAY, and UNSOUND, the British miniseries SWITCH and HIT & MISS, and the American miniseries WHEN THEY SEE US. Additionally, he played the freed Meereen fighter Mossador in GAME OF THRONES.

In a Zoom call, Noi discusses DIARY OF A SPY.

REECE NOI: It came to me via my manager, who asked, would I be willing to meet the director? I loved the script, because I just thought it was very unusual. I don’t think it was like anything I’d ever read or done before, and I’m always trying to do things that feel new. So, I went and met Adam at a sports club downtown, and was surprised, because almost immediately, he said, “I’ve watched three of your projects, and I definitely want you to do this,” which I think was the quickest I’ve ever gotten a job in my life [laughs]. And that was it. From then, it was go.

AX: DIARY OF A SPY is a somewhat unconventional example of the genre. Is the spy genre something you generally enjoy?

NOI: I’ll be honest – technically, no, [most spy genre movies are] not something I would watch. I like character-driven pieces, and I feel like typically, spy movies are very big on action. That’s why I think I like this, because it wasn’t a typical spy movie in the conventional sense. 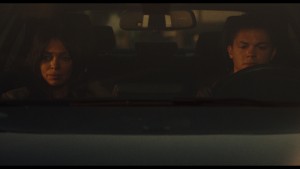 AX: Early in your career, you were in two different episodes, as two different characters, in the very long-running English hospital series CASUALTY. How was that as an early acting experience?

NOI: It was great. It’s one of those things – [for] most British actors, it’s like a rite of passage. And I always felt lucky, because the two episodes I did, I felt like they were really wonderfully-written scripts. And obviously, I got to work with people like Tom Hiddleston [who was one of Noi’s fellow guest stars]. Yeah, I really liked the storylines I had on CASUALTY. Both were very intense.

AX: Speaking of intense subject matter, how would you describe DIARY OF A SPY?

NOI: I would say it’s a movie about two people who struggle with themselves, and have found ways to distract themselves from that when then meet one another, and somehow find solace in one another, despite the odds.

AX: And how would you describe Camden as a character?

NOI: I think Camden is someone who has spent his life moving around, never really had a chance to make real, genuine connections with people and, because of that, has decided that it’s unavailable to him. That’s probably why he was drawn to the work that he does, because it enables him to not have immediate, or any sort of emotional contact with people, or any sort of prolonged contact. He’s deprived himself of that. When he meets Anna, he realizes that it’s exactly what he needed.

AX: Your speaking voice is different than the accent you use as Camden. It’s still English, but Camden has what I think is called a received-pronunciation accent. Is that an easy accent for you to do, or did you discuss that with the director and have to work on that, or how did that come about?

NOI: So, initially, I wanted Camden to be American, but Adam really liked the idea of him being European. I’m working-class, I’m from Manchester [in Northwest England]. And whilst it’s not entirely impossible in the current age, the likelihood of a working-class person being a spy, or having assets and the finances to do that, is low. So, we figured that Camden probably had a higher social status than what I come from. So, yeah. So, it’s not an accent that I have. I’ve done the accent before. It’s a British accent, but someone who is likely from a higher economic background. 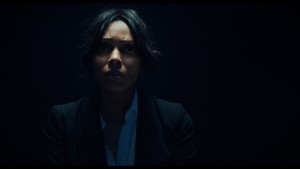 AX: How was working with DIARY OF A SPY writer/director Adam Christian Clark?

NOI: It was great. Adam is very focused, he knows what he wants. He casts very carefully, he casts people who he knew would be able to give him what he wanted on set. So, by the time we got to set, there wasn’t a huge amount of dialogue. It was very much just, “This is how I’m going to shoot it, do you have questions?” And then maybe every now and then, he’d question something. But it felt very trusting, it was very much, “Let’s see what happens.” And obviously, Adam wants very natural performances, very subtle, very nuanced. And we shot it very quickly, I think in twenty-one days, something ridiculous like that, and it’s a small, small crew. So, yeah, it was a very challenging but a great experience.

AX: How was playing opposite Tamara Taylor?

NOI: Oh, I love Tamara. We formed a very great friendship on that movie, and it was great. We had conversations every day about our characters, about scenes we were doing. It felt like a very symbiotic relationship, and I’m really grateful I got to meet and work with her.

AX: Did you have any input into Camden’s look?

NOI: Typically, I try not to get too heavily involved with costume. I know some actors that are very particular about it, and I understand it. For me, I like to try and trust the costume. Occasionally, I might be like, “I don’t think that’s right,” if something doesn’t feel right when it’s on. But it was fairly collaborative. I think and Raquel [Deriane, DIARY OF A SPY’s costume designer] had three sessions together in total, where we had, believe it or not, forty, fifty outfits that we tried on. It was a process of eliminating, me wandering in them and feeling what felt right. Me personally, I like clothes that I look cool in, I enjoy it. I knew that I wanted Camden to wear something that was practical, and wasn’t in any way attention-drawing. So, I knew that he would be about comfort. Clothes aren’t something that bother him, or he thinks about too much, beyond how they feel on him. 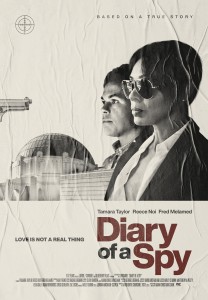 AX: Did you have to learn how to do anything for DIARY OF A SPY, like bowling, or playing the piano, or speak other languages?

NOI: You know what’s really funny. I lived in Sydney [Australia] briefly, shooting a movie [UNSOUND] there [in early 2020], and I came back [to Los Angeles] I think March of that year. For that movie, I had to learn very basic piano and guitar, amongst a couple of other things. So, when I came to this, and I had to play piano again, I played chords, essentially. So, I didn’t have to learn piano.

Spanish I had anyway, and actually, they cut that scene down where I had to speak Spanish, which I’m very disappointed about [laughs], because it would have been the first time that I had spoken Spanish in anything. I think I speak a little bit of Arabic. I try and have a few words in most languages. My school that I went to was very diverse, and I know bits of Arabic, but I don’t know what I said in the movie, I had to learn that.

AX: DIARY OF A SPY is set and shot in Los Angeles. Did you come out here for the film?

NOI: No, I’ve been here now for five years, and I came somewhat with reticence. I don’t know that I was one of those actors that wanted to be in Hollywood; I was always very happy doing my gritty British dramas. Then I did GAME OF THRONES, and suddenly, everyone was like, “You need to go – you should be in L.A.,” and for the first time in my life, I thought, “Perhaps I should. Maybe it’s time for a change.” I felt like the roles I was doing in the U.K. felt very similar, and whilst it was lovely to be known by the circuit and the casting directors, it definitely felt like I was being sent the same things over and over again. So, I came out [to Los Angeles] the first time, and imagined that I wouldn’t like it, and of course, fell in love and loved it. So, that put the things in place to live here full-time. 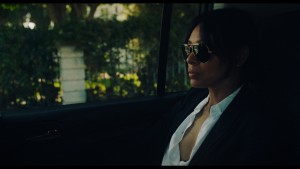 NOI: I do have a Disney+ show. I don’t think I’m allowed to say the date that it’s going to air, but I am going to be in the next [season] of THE MYSTERIOUS BENEDICT SOCIETY. I have a nice recurring guest arc on that.

AX: And what would you most like people to know about DIARY OF A SPY?

NOI: I think I would like people to know that it’s not what you expect. Like I said earlier, typically, I wouldn’t be drawn to a spy movie, but this is just a really wonderful story about two people meeting and falling in love, and I think that resonates for all of us. We all can understand that, or long for that, or experienced it in some capacity. And also, two people who, despite being flawed in their own ways, are actually really wonderful people who want to do the right thing, and I think there’s also something quite wonderful about that. So, I would like people to know that it’s hopeful, without being too saccharine. I think that’s it [as far as comments about DIARY OF A SPY], other than, see it.

Related: Exclusive Interview with Tamara Taylor on her new film DIARY OF A SPY