The documentarian talks more about the African wildlife series 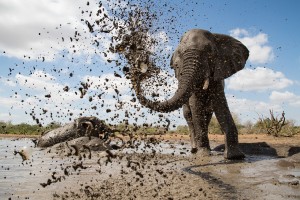 In Part 2 of our exclusive interview with wildlife cinematographer Bob Poole, he talks more about the new three-part PBS documentary series LIFE AT THE WATERHOLE, which begins Wednesday, May 19 and continues on successive Wednesdays.

With Dr. M. Sanjayan, Poole cohosts LIFE AT THE WATERHOLE, which revolves around a manmade drinking pool set up for the wildlife in Africa’s Mwiba Wildlife Reserve. A camera blind was constructed inside the waterhole, enabling the filmmakers to get unique footage of animals without disturbing them.

ASSIGNMENT X: LIFE AT THE WATERHOLE is broken into three seasons: dry, hot, and rainy. Are there any other African seasons that are not included?

BOB POOLE: Well, in that part of Africa, I think of there really being dry seasons and wet seasons. The early spring/summer, fall/winter. It’s either rainy season or it’s dry, and then you have shoulder seasons in between. So, there are actually two rainy seasons, but one is very short, and the other one is long. And the weather has been really messed up, probably due to global warming, and the seasons are becoming quite unpredictable. So, you’re getting very, very dry, and you’re getting torrential rain. And we had both.

AX: Obviously, you have a lot of experience filming in all sorts of conditions, but do you have to do anything special when it’s raining torrentially, either to protect your equipment, or to be able to see what you’re filming?

POOLE: [laughs] Yeah, it’s really tough, to be honest. The rains are a problem. I love the rain, I love to film in the rain, because everything looks so good. Images are just so rich. But I work in a pretty open vehicle. I find that to be great for filming, because you can see all around you, and you’re not obstructed in terms of camera, but that presents a big problem in the rain. I have all kinds of things, tarps and tops, to keep the rain off, but it is a struggle. It’s a battle. And trying to film while it’s raining is really tough. The moment the camera gets water on it, it becomes a real challenge to keep those images looking sharp and clean, and it’s hard, because like Sanjay says in his narration, it’s torrential rain.

It’s not just a problem for the cameras and the filming, it’s actually getting around. There are rivers that come up. There are a lot of dry river beds there, but they come up really fast [with] flash floods. And you get stuck on one side of a river or another, and when you try to cross, even though the vehicle is extremely capable, the water will take the vehicle downstream. So, you have to be extremely careful crossing these rivers. But it’s not just river crossings. That car could actually run under water, but it’s just in [the water], the river will push it away.

The other problem is, the rain waterlogs the soil, and it’s a kind of greasy mud there – we call it “black cotton soil” – it’s slippery, and the vehicles bog down in that easily. So, when I’m out working alone, I have to be able to get myself unstuck. I have a winch and all kinds of things. When I’m filming, it’s just one other thing that I’ve got to deal with, just the capability of getting around out there. 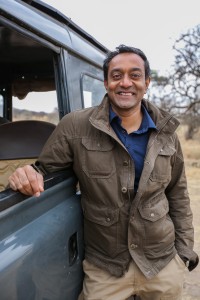 AX: Do the animals behave differently in the rain?

POOLE: They do, actually. It’s fun to see, because especially in the beginning, when the rain starts to come, everything gets overjoyed. They get energized, so they’re running, and playing, and kicking up their heels. They’re elated, it seems. But then it gets to where they’re cold, and wet, and waterlogged, and they’re over it. You often see a lot of animals just standing looking miserable, with their butts to the wind.

Sanjay mentions something that is really cool in his narration, where the rain is coming from up high. These are massive rain cells that form, usually in the afternoon. And when the water comes, it’s actually very cold. You’re in a warm environment. So, when you get cold water and wind associated with a storm, the temperature drops really fast. The local people, the Maasai, have a problem with their cattle when the first rains come. Often, at night, many can die of hypothermia. So, it’s this thing where the animals at first are really excited about the rain, and then I think it tends to wear on them.

AX: Cattle are subject to tuberculosis, and other human-type respiratory diseases. Is that true of some of the wildlife as well?

POOLE: Wildlife are just so well-adapted to that environment, they’re so hardy compared to cattle, even the Maasai cattle that are just so tough. The wildlife is so smart and capable of dealing with [the weather]. In a healthy ecosystem like Mwiba, an animal that’s not well doesn’t last long. It’s taken by predators pretty quickly. So, you don’t see a lot of sick animals running around. But the animals there are so, so healthy.

AX: Are you prepared for what you’ll find when you’re driving around doing the nighttime filming?

POOLE: The scenes that I’m involved in are mostly in the moment, things are happening as we see it. I’m discovering a lion, finding a cub, that sort of stuff, discovering the female with the cubs. It’s being filmed while we find it.

AX: You’re in a fairly open vehicle. While you’re out driving, are you worried that anything is going to jump inside with you, or does the motor deter most animals?

POOLE: You’re really not in any danger out there, unless you are walking on foot. Things don’t come out to the car in that environment. There are other places in Africa where I’ve been smashed by elephants, I’ve been chased by hippos and rhinos, and I’ve even had lions charge, but they’re usually in places where the animals either have never seen people, or they’ve been really messed up by people. Mwiba [where LIFE AT THE WATERHOLE was filmed] is pretty pure. So, the animals have a healthy respect for you, but they’re not terrified. And so, driving around out there, I never feel in danger. I wouldn’t get out of the car and just go walking. Although we do sometimes have to leave the car to track [animals], and then we just have to be really careful. 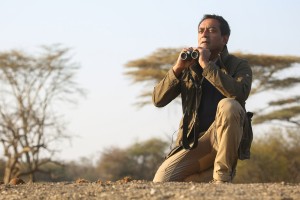 AX: So, the big danger is mosquitoes?

POOLE: [laughs] Well, I’ve had malaria three times, and it’s a horrible thing. I wasn’t really joking about the mosquitoes. They’re something to worry about. I don’t want to discount the fact that those animals are dangerous, but I’m very comfortable on my own out in the bush in my Land Rover.

AX: Are the cameras inside the waterhole blind operated by people inside the blind, are those cameras operated remotely, or are they just fixed?

POOLE: Well, there’s the blind, that concrete bunker, that’s in the middle [of the waterhole], and I often worked in there with my camera, which has a big long lens on it. But the operators for the remote cameras are in the tent, where you often see Sanjay, and I’m in there, too, with him. And there’s a switcher. I think they had eight cameras [in the blind] that were all connected to one board, and they had the ability to switch between cameras while recording all cameras. So, they have several monitors that are showing each image that’s coming up, and they were able to switch back and forth. We called them “PTZ” cameras – pan, tilt, zoom – and that is all controlled remotely with a joystick. It’s really cool. It’s quite impressive, and very entertaining, to sit behind the PTZ camera operators and just watch them go, when they’re managing so many different cameras at once. They basically will lock off one camera, while they go to the other and start filming.

AX: In LIFE AT THE WATERHOLE, what is the balance between the footage taken from within the blind, and the footage that you capture outside the blind?

POOLE: Well, the film is really about the waterhole. They’ve captured such beautiful material at the waterhole. It’s stunning, and it gives you a perspective that you don’t get with a long lens from a vehicle. Wildlife is very tolerant, they get used to things quickly, and I think the footage at the waterhole is amazing. So, when it’s me, and I’m out there doing my film, or they’re using my footage, it’s traditional African wildlife filming. The stuff at the waterhole is drop-dead, cutting-edge, really stunning imagery, because it’s so fresh, unique, and beautifully captured.

I would say, though, that the nighttime photography that I did is absolutely state of the art. We’re using absolutely the most sophisticated nighttime camera in the world, almost one of a kind. We call it the Selex. You won’t find much information about it, but it’s a really cool piece of technology. That’s where we see the cubs come down, and suckling from their mother, and that’s never-before-seen stuff, using that camera.

POOLE: Yes. Most of what we’re shooting these days is, of course, 4K and higher.

AX: What would you most like people to know about LIFE AT THE WATERHOLE as a series?

POOLE: I thought they did a fantastic job with the photography at the waterhole. I thought that there was a great team. I think that Sanjayan is a wonderful host for the series, and I think the concept is a great and really important one.

As I said, we never liked manmade waterholes for wildlife before, because it really does create a disturbance in a natural ecosystem. But I think now, moving forward, we have to consider all options here, and artificial, manmade waterholes may actually turn out to be a savior. And to understand that, I think it is good to do a study like this, and document how it changes things for the wildlife in the area. So, I hope people will tune in and watch it. I was impressed with what they pulled off there.