HEAD OF THE CLASS: Actress Dior Goodjohn on new version of the classic sitcom – Exclusive Interview 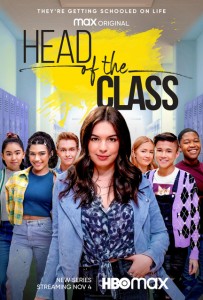 HEAD OF THE CLASS was originally a half-hour comedy that ran for five seasons, 1986-1991, on ABC. The show concerned a group of exceptionally bright high-school-age students who were put together in the same class.

Now HBO Max, which is also making the earlier series available, has brought forth a new HEAD OF THE CLASS, with a new group of students dealing with school and life in 2021. The entire ten-episode first season premiered on November 4.

Dior Goodjohn plays Robyn Rook, who enjoys debate, games, and snark. Goodjohn, high school age herself, has previously had roles on GLEE, RAVEN’S HOME, and THE UNICORN, but HEAD OF THE CLASS is her first experience as a series regular. The rest of the cast includes Jorge Diaz, Adrian Matthew Escalona, Isabella Gomez, Jolie Hoang-Rappaport, Katie Beth Hall, Gavin Lewis, and Brandon Severs as other classmates, and Christa Miller as the school principal. Robin Givens, one of the stars of the ’86-’91 HEAD OF THE CLASS, appears as her earlier character Darlene.

Speaking by phone, Goodjohn talks about all things HEAD OF THE CLASS.

ASSIGNMENT X: Especially because it was on the air a good while before you were born, were you familiar with the original HEAD OF THE CLASS?

DIOR GOODJOHN: Okay, so, to be honest, I was not until I got further in the auditioning process. I was telling my dad about it, and he said, “You mean the one that Robin Givens was in?” And I said, “Yes.” So, then we sat down and watched the first season and the pilot together.

AX: Robin Givens was a series regular on the earlier HEAD OF THE CLASS, and appears as her character Darlene in several episodes of your show. Is your character named after Robin Givens?

GOODJOHN: I think she is. We never discussed it, but I think that’s what they were alluding to. 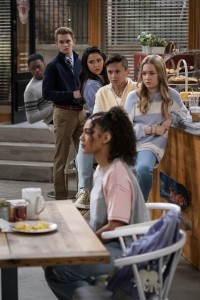 AX: Is everybody in this HEAD OF THE CLASS in the same grade, and if so, what grade is that?

GOODJOHN: This is funny, because it’s a big debate that we were having in the group chat [among the cast]. So, again, it never really was discussed on set together, but we’re pretty sure that either everyone’s a freshman or that me, Makayla [played by Hoang-Rappaport], and I think Sarah [played by Hall] are freshmen, and then Terrell [played bySevers] and Luke [played by Lewis] are sophomores. So, we’re not totally sure, but I do know that Robin is a freshman.

GOODJOHN: It definitely wasn’t, because my first year of high school, I did online, over Zoom [laughs].

AX: Was this because of the pandemic?

GOODJOHN: This is because of COVID.

AX: So, hers is not like yours, but do you have an opinion of Robin’s freshman experience? 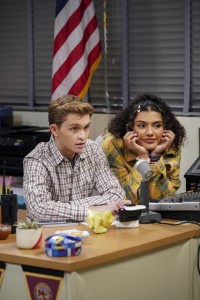 GOODJOHN: So, we know for sure, Robin is the type of person, if she wants something, she goes after it, and does everything that she can to obtain it, no questions asked. We never really touched on Robin’s relationship status or Robin’s family status much this season. But I think once it gets to that, it’s never going to be a wishy-washy situation for her. I think it’s going to be very much like, “I know what I want, I’m going to go get it.”

AX: Does Robin have favorite classes? Or un-favorite anything, where she’s like, “I don’t want to do this”?

GOODJOHN: I think Robin’s favorite class would be debate. [laughs] I think that’s her whole thing, because that’s the place where she can express herself and assert herself freely without being judged, or having any backlash. I do think that one thing that Robin definitely would not ever like to do is, if there’s ever a cheer team at school, you can count her out for that, a thousand percent.

AX: How is it being a series regular?

GOODJOHN: Honestly, it felt like home. It felt energetically right and correct. I don’t really have anything to compare it to, but I would not ever change this experience for anything in the world. I got lucky. The whole cast is so supportive, and welcoming. We all just got along really well, we actually all clicked. So, I’m super-grateful that I was able to be a part of something like this on my first time around. It was amazing.

AX: Had you done theater before this?

GOODJOHN: Theater? Oh, my God, yes. Literally, all of elementary school. There was this thing called Jaxx Theatricals. It’s a program [in Los Angeles] after school where you pay a certain amount to do it, and then what they do is, they put on a whole production with top-of-the-line costumes and mics and all of that. And it was so dope. I did THE WACKY WICKED WIZZING WORLD OF OZ. It was a mixture of THE WIZARD OF OZ, THE WIZ, and WICKED. And then I did THE LION KING, and then I did HAIRSPRAY with them over the summer. And I love it.

AX: Is doing a character where the scripts are different each week, but you’re playing the same character similar or completely different to doing a stage role, where you’re doing the same part every night, but the script doesn’t change? 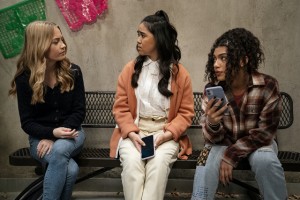 GOODJOHN: I never thought about it that way, but in terms of it being a challenge, it’s not very different. Because with theater, even though you’re doing the same thing every night, you learn to bring certain things to the table. Also, you get notes after each show. So, it would change. The only thing that I would say is different is [that television] is less of a big animated way of acting, and more realistic.

AX: How is it having new scripts to work on with regularity? Was it each week, or what was the schedule like for each episode?

GOODJOHN: We would get a new script in almost every night [laughs]. I feel for that writers’ room, because we would always be getting a new, completely revised script at three in the morning. You’re like, “You guys must need sleep. You can go rest.” It was definitely a challenge. But we did have enough time to get acclimated with everything new. We all came to an agreement where we memorized and we’d get the storyline down, but when it comes to the shoot day, it’s fine if [the dialogue is not exact]. Because on shoot days, when I tell you that you get changes on changes on changes, it was amazing. It was fun, for sure. But I think we all definitely are very fast at memorizing, super-fast learners, so it never really was a big deal or issue.

AX: Is HEAD OF THE CLASS multi-cam, or single-cam?

GOODJOHN: It’s a multi-cam, with single-cam elements. So, it’s kind of a hybrid show.

AX: How was it working during COVID? Did you and the other actors have the ability to get together and get to know each other at all, or because of the protocols, did you get to talk very much between set-ups?

GOODJOHN: Again, I have nothing to compare it to, but it was an experience. During the pilot, especially, it was, “Don’t go into other people’s rooms, blah, blah, blah,” but one thing that we did do was, we always went on walks together around the lot at lunch, so we were able to get to know each other. And we always did group Zooms together, and we’d play Cards Against Humanity after filming.

Especially in between the pilot and filming season, we would always be on Zoom calls together, so we did get a pretty good chance to know each other. It was very much like, “Okay, we’re not allowed to hang out at work, but we’re all safe, and we know that we don’t have COVID, because we’re getting tested every three days.” And we’d go hang out outside work. So, we always did things together after work. 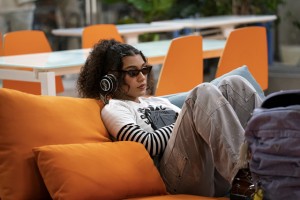 AX: And what would you most like people to know about the new HBO Max HEAD OF THE CLASS?

GOODJOHN: One thing that I’d like everybody to know is that it’s one of the cutest shows ever. We spent a lot of time working on it, we all put in our best efforts, we put all our energy towards it, because it was super-easy for all of us to connect. So, just know that it’s an escape. If you need a good laugh at the end of thirty minutes, where you know that everything is going to be fine after all the drama, then this is the show for you.

Exclusive Interview: Mary Lynn Rajskub on the end of 24 and HOW TO BE ...
TV Review: BONES – Season 10 – “The Big Beef in the Royal Diner”
Trailer Park: LEGO BATMAN, BRIDGET JONES’S BABY And More
Composer Fernando Velazquez hears fear and emotion when A MONSTER CALL...