The actress talks her conflicted character on the series 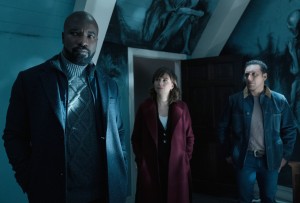 EVIL has moved to Paramount+ for its second season, with new episodes arriving on Sundays, following its first-season run on CBS. Created by Robert King and Michelle King (THE GOOD WIFE, THE GOOD FIGHT), EVIL follows a team of three tasked by the Catholic Church with investigating whether seemingly supernatural events have mundane, demonic, or even angelic explanations. It has just been announced that EVIL has been renewed for a third season.

Katja Herbers plays Dr. Kristen Bouchard, a forensic investigator and married mother of four young daughters. Kristen starts out as a lapsed Catholic, who by Season 2 isn’t quite sure what she believes, especially once she learns that a troubling conspiracy may be connected to one of her children.

Kristen is also dealing with a problematic attraction to co-worker and priest-in-training David Acosta (Mike Colter), who believes he’s actually seen God. Their tech expert colleague Ben Shakir (Aasif Mandvi) is a nonbeliever who can usually find rational explanations for mysterious happenings, but a lot of what’s going on lately baffles even him.

Herbers, originally from Amsterdam in the Netherlands, has previously appeared in numerous films in both English and Dutch. Her regular and recurring TV credits include THE AMERICANS, MANHATTAN, DIVORCE, THE LEFTOVERS, MANHUNT, and WESTWORLD.

At a Q&A session for the Television Critics Association, Herbers talks about EVIL.

Regarding Kristen’s changes from the beginning of EVIL until now, Herbers relates, “I think, at the beginning of the [first] season, I’m definitely only science-based and very skeptical about anything supernatural, but I think as [the series] progresses, I become maybe a little bit more in the middle of Mike and Aasif’s characters, and I allow doubt. I think I’m still probably more science-based. But there are things that I can’t explain, and it becomes pretty scary.”

On working with the young actresses who play Kristen’s daughters, and frequently have overlapping dialogue, Herbers says, “It’s really, really great. All four of them are incredibly talented and very good at improvising, and we have a very strong connection on and off camera. I think what is wonderful in the way that Robert and Michelle write their dialogue is that it’s always scripted to be spoken at the same time. So, you’ll see these dashes in the script – it just says, ‘Daughters,’ and there are all these different lines that they’ll say, and on the day, we’ll pick who says what, adjusting and sometimes pick one line out that we should really here or whatever. But I think that makes for the very organic feel of it.”

As far as the simmering attraction between Kristen and David, Herbers says, “I think it’s all the more profound and maybe also sexy because there’s such an intellectual attraction as well. Our views are so different, yet we love talking to each other and exploring each other’s minds that we could go on talking for a very long time without taking off our clothes, and it would still be very satisfying.”

Without giving away Season 2 spoilers, Herbers notes that the most frightening for her so far that the audience has already seen is, “In the pilot, George [a chatty demon played by Marti Matulis] was there, and the cutting off of the fingers and those nightmares were maybe some of the scariest scenes that I’ve had to film.”

More recently, Herbers gets on Zoom for a one-and-one conversation about EVIL Season 2. 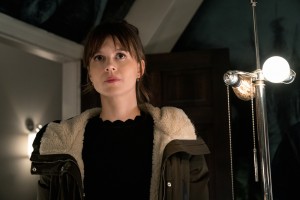 KATJA HERBERS: I did THE AMERICANS, a little stint on that wonderful show, a couple years ago. But this is my first longtime New York job.

AX: Is working in New York different from working anywhere else?

HERBERS: It is, but it also isn’t, because I work all the time, so I really could sort of be anywhere, because it’s not like I have any time to do anything outside of working [laughs], so I might as well be in the middle of nowhere. The only good thing about it is that people love New York, and want to come visit me.

AX: EVIL exists on a knife edge between what can be explained by science and what can only be attributed to the supernatural. Do you come down on one side or the other, or are you sort of on the knife edge with the show?

HERBERS: Well, I do think that there are obviously a bunch of people on this planet who are evil. I don’t think they’re evil because of religion – I mean, sometimes people do evil things in the name of religion, but I don’t believe that anyone is born evil, I don’t believe in original sin, I don’t believe in any of that. But I do believe that there are a lot of people who seem to be wanting to destroy the planet and other people for – pleasure? For personal gain? I have no idea. So, I think our show, whether or not you believe in God, is interesting, because it’s unfortunately just what we’re dealing with in our day-to-day lives. And hopefully, we will be able to take care of this planet at the last minute, and still be able to stay on it. But there are a lot of people who seem to not care, and are fine with destroying it.

AX: What has been the most challenging aspect of playing Kristen for you?

HERBERS: Well, the most challenging aspect for me is always to be ready in the right moment. You have to deliver when they say, “Action,” and when it’s “Cut,” it’s done. So, it’s really about trying to balance your energy in a day. So, that’s always the most challenging part for me. The things that I get to play are all wonderful, and I can play all those things. You just have to be ready in the right moment.

AX: Do you have a favorite scene or episode that you’ve gotten to do so far in EVIL?

HERBERS: Well, the finale of this [second] season was very challenging, and when I read it, I said, “Well, okay, I’m going to have to lock myself up in a room to be able to play that,” and then I did. I haven’t seen it, but I thought it was a very, very powerful last scene of the show, which you’ll see, and hopefully it turned out well. But I think that’s probably my favorite. 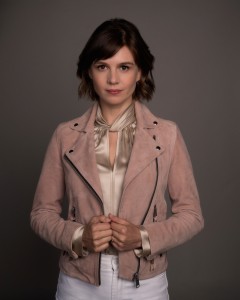 AX: How is it doing scenes with the ensemble, and with the guest actors?

HERBERS: I really, really enjoy every single person on the show. I love working with Mike and Aasif. I love it when we’re together. I also really love my [onscreen] kids. Those scenes are always great to do and it’s wonderful to spend time with them. I think I probably enjoy it most when I get to play with people that I already have a relationship with, that Kristen already knows, and there’s a depth to the relationship. But the other great thing about our show is that we get these amazing guest actors who are all taken from Broadway, and so I get to play with all these [people] who I admire from the stage. So, there’s really not a bad day at work for me [laughs].

AX: Do you know if EVIL may be going into a third season?

HERBERS: Yeah. I think we will. We haven’t officially been picked up, but I don’t really see a world in which we don’t, because it’s been such a massive hit. Especially last year, we had a [Season 1] run on Netflix, and we were in the Top Ten for three, four weeks, which is just amazing. And now we’re kind of a flagship show on Paramount+. So I don’t see a world in which we don’t, but it hasn’t been officially announced. 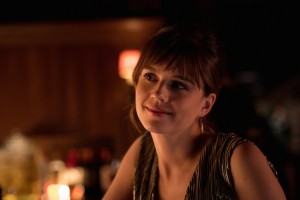 AX: And what would you most like people to know about EVIL Season 2?

HERBERS: I’d like them to know that the show is even more bonkers than last season. I like very much the way that our show was described, which is that you can’t describe it, and people aren’t really able to say what it is. It’s not a horror show, but it is; it’s all these things at once, and it’s not any one style. And I think it continues to be something where you’re probably going to watch an episode and think, “What the hell did I just watch?” [laughs] And be really excited to watch the next one.