The actor talks her favorite scenes, suggestions, and more 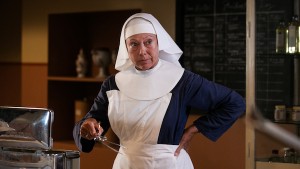 In Part 2 of our exclusive interview with actor Jenny Agutter, she talks more about the British period drama CALL THE MIDWIFE, which is currently airing its tenth season in the U.S. on PBS on Sunday nights (check local listings for specifics).

Created by Heidi Thomas, based on Jennifer Worth’s best-selling memoirs, CALL THE MIDWIFE explores the lives and work of the Anglican nuns and lay practitioners of the fictional Nonnatus House in London’s East End. Each season of CALL THE MIDWIFE is set in a successive year. It is currently up to 1966.

Agutter, who has played the dedicated Sister Julienne since CALL THE MIDWIFE began in 2012 (the onscreen year was 1957), speaks by phone about the show on screen and behind the scenes.

ASSIGNMENT X: Can you talk more about having played Sister Julienne for ten years?

JENNY AGUTTER: We recently did a documentary [SPECIAL DELIVERY, which will air on PBS on November 21], which is about the ten years. [When CALL THE MIDWIFE started], I couldn’t see it being ten years, and I couldn’t imagine, even for three years, it going on and on. And then, when I watched the documentary, which was beautifully put together by our producer, it was amazing what we’d done [laughs]. What is interesting is the stories they cover – because we started [the story] in 1957, and we’ve followed what’s happened every year since then. And that’s fascinating to watch, because things change enormously in the U.K. I mean, they’re changing worldwide, but in ’57, you’re right at the tail end, you’re still feeling the repercussions of the Second World War, and the lack of facilities, of things that have closed down.

And the ‘60s is an urgent time of art and music and science and exploration of space. There’s so much being discovered, and that’s exciting to see. Now, the other thing about spending ten years – we’re now on our eleventh year, which we’re working on right now – is actually what happens with our cast and crew. They’ve having families growing up, my son has grown up, there are people having children, like Helen George [who plays Nurse Trixie Franklin], who had her baby, and it’s wonderful. So, you’re measuring your own life, and another [fictional] one, albeit sixty years apart.

What I keep reminding myself is, how much we change, and don’t change. I think as people, we very much remain the same, but the times are changing. [On CALL THE MIDWIFE] we’re in the ‘60s now, which I remember [in reality] as a young teenager. For me, it was an extraordinary time to be a teenager. You’d go to Kings Road, you’d see music, you could see the Beatles and Bob Dylan and the Stones, and then the news and Viet Nam and what was happening worldwide. It was a very energized time. But what is peculiar is just looking at how different those same social changes would be for someone like Sister Julienne, who has gone through the First and Second World Wars as a young woman.

AX: Do you think one of the things that people respond to about CALL THE MIDWIFE is that it has main characters who are women who in control of their lives, and often on their own paths outside of men?

AGUTTER: We’ve seen women have more and more control of their lives, and ultimately, it gives women a great deal of control of their lives. Centrally, you’ve got a group of women who are actually very dedicated to their careers. But you also see changes within the community. [Trixie and the midwives are] going to people’s homes, and now, more and more, we’ve got young women coming into a clinic, and coming to our maternity home. That’s a big change that’s happened. We’ve seen the relationship change between the men and the women. In fact, men come into [the delivery rooms for the] births, which we wouldn’t have at the beginning of the series at all. And I think it is wonderful to see the changeover.

During the war, women did take on the jobs of men. That was the first time [it happened in large numbers]. It had not been that long since women actually got the vote. In America, it was the same thing. Women were fighting over there for the vote, and then fighting over there for independence, and showing that they could take on the jobs. [On CALL THE MIDWIFE], it’s gone beyond that to looking into changes in the quality and the ways of living. I think it’s very important to see those changes.

AX: The vote to legalize abortion in England was passed on October 27, 1967, and came into effect on April 27, 1968. How is Sister Julienne going to feel about that?

AGUTTER: It’s something that has [already] come up for Sister Julienne. She’s seen so many women suffering with backstreet abortions, and she’s seen so many women suffering with large families and finding it really hard to cope, so she’s [concerned with] what’s important for those women. The midwives feel very strongly about that aspect of supporting women, should they need to be supported through an unwanted pregnancy. What we’ve seen and what we know, is that these backstreet abortions, which are almost bound to happen when people are in an absolute terrible state of mind, are just appalling.

AX: And of course, we’re dealing with a lot of craziness around that issue in the U.S. right now. 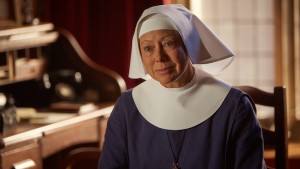 AX: Do you have favorite episodes or favorite scenes that you’ve done over the ten years?

AGUTTER: Yes. There are a lot of things that stick out in my mind as being quite special. It’s not necessarily ones that one has been involved with, but just a scene. I remember Cheryl Campbell playing Lady Browne, the mother of Miranda [Hart] as Chummy, who was this wonderful character, very early on. Heidi Thomas’s writing is terrific. She uses little instances to express things. She showed a very difficult relationship between mother and daughter, one that was not able ever to express a great deal of love. At the end of it, Chummy’s mother is dying. And there’s just a very simple scene of Chummy holding her mother’s hand. Her mother wants a manicure. It’s very touching, because it’s an opportunity to really be close in a way that they never have been, and recognize what’s going on, and just taking the moment.

And there’s a lovely moment that Heidi also wrote, where someone needed a wedding dress. And so, the nuns got out their old trunk of wedding dresses that had been tucked away, because when nuns come into the Church, they are married to Christ, so they wear a wedding dress [to take their final vows]. And they just sat for a moment, digging these things out, and remembering their pasts and their lives. But here are a lot of instances in CALL THE MIDWIFE that I just love, about people, and about the way we behave, and the way we are together, and what we remember, and what we care about. And I find that Heidi weaves a lot of unexpected points into her stories.

AGUTTER: I have done, particularly in one episode. It was less about Julienne, although I did come up with ideas about that. I know that Heidi likes facts, and likes looking through all of the things that happened in a particular year. And in our second year – I’m very involved in cystic fibrosis [research fundraising and awareness]. It’s something that’s in our family. Cystic fibrosis is a genetic condition. One in twenty-five people are carriers, but you don’t have a child that might have this life-threatening condition, unless you have two [parents that are] carriers, and then, if both parents are carriers, you have a one-in-four chance. My niece has cystic fibrosis, because both my brother and his wife were carriers. I’m a carrier, but my husband’s not. With all the medication and changes, my niece Rachel is now forty-two. But when she was born, they really looked to a future where she might not have lived to fifteen.

I brought a story to Heidi for 1960, when it was the first time it was possible to do a simple salt test to determine whether someone had cystic fibrosis or not. A lot of children were not identified as having cystic fibrosis. Also, in the past, they believed that a child that had a taste of salt on their skin couldn’t survive. And so, Heidi came up with [a storyline] for a family that had cystic fibrosis, and Dr. Turner [played be Stephen McGann] struggling with finding out about it, and what it might be, and reading up about cystic fibrosis. It just tied in with [the season’s larger] ideas. So, yes, Heidi does listen to ideas from outside.

Related: CALL THE MIDWIFE: Actress Jenny Agutter on her long-running series and her thoughts on AN AMERICAN WEREWOLF IN LONDON’S 40th ANNIVERSARY – Exclusive Interview – Part 2