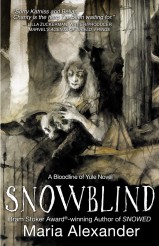 The conclusion to the Bloodline of the Yule trilogy 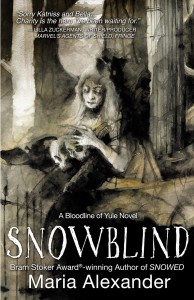 SNOWBLIND is the third installment in author Maria Alexander’s Bloodline of the Yule trilogy, following her Stoker Award-winning SNOWED and its sequel, SNOWBOUND.

The books posit the intriguing mythological notion that jovial Santa Claus, aka St. Nicholas, and evil Krampus are in fact two aspects of the same being, the Klaas.

Charity Jones is a teenager who is also a brilliant mechanical engineer. Our narrator in SNOWED, she falls for the mysterious Aidan MacNichol, who turns out to be the son of the current Klaas.

In SNOWBOUND, Charity and Aidan take turns narrating the action, which moves to the North Pole, as the old Klaas dies and Aidan takes his place. Charity and several of her friends make their way to the Pole as well, believing that Aidan needs rescue. They’re right overall, though they don’t anticipate the source of the danger.

SNOWBLIND picks up right where SNOWBOUND leaves off. It helps to have read the other two novels relatively recently before picking up this installment; the relationships are plain, but some details will otherwise take a few beats to set in (Reilly is an elf, Charity’s brother Charles was a homicidal psychotic, etc.).

A cadre of Aidan’s half-siblings are storming the Klaas stronghold, some wanting his power, some craving the treasure within. The marauders are well-armed, and they have taken Charity’s father hostage.

Charity and her friends Michael and Judy, accompanied by a group of elves, must venture out on a quest for help, while Aidan tries to stave off the invasion. At the same time, a young woman named Beth, who is undergoing a supernatural pregnancy, is desperate to get an abortion.

The narration this time is alternately given by Charity, Aidan, Michael, and Beth. Beth in some ways is the most surprising character. Depicted previously as a shallow popular teen, she deepens considerably as she must figure out how to get an ally and how to communicate (the pregnancy has affected her ability to speak).

Alexander has a great gift for interweaving and expanding on centuries-old real-world folklore. Additionally, she creates thorough, immersive environments, from suburban streets to the Klaas fortress to a terrifying forest.

The voices of the characters are candid and appealing. We invest easily in all of our narrators. Best of all, the pacing is propulsive and the perils varied and severe. At each turn, we wonder how our protagonists are possibly going to get out of each new crisis. The answers are all set up well, and making for some thrilling action.

Although SNOWBLIND concludes what is billed as a trilogy, the end leaves multiple characters in the midst of great change. Alexander sets up the prospect to explore a new set of dynamics going forward. If she follows up with this, it promises to be a journey well worth continuing.