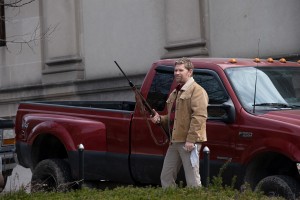 AMERICAN RUST was developed for television by Dan Futterman from Philipp Meyer’s novel. The Showtime limited series, airing Sunday nights, is set in the fictional small town of Buell, Pennsylvania, and concerns the widespread fallout from a murder.

The prime suspect in the murder is Billy Poe (Alex Neustaedter), a young man who has stayed in Buell despite the offer of a college football scholarship. Billy’s parents are no longer together, but still hook up once in a while. Billy’s mother Grace (Maura Tierney) is involved with Buell Sheriff Del Harris (Jeff Daniels).

Mark Pellegrino plays Billy’s father, Virgil Poe, who is not precisely a responsible person. When the house where Billy and Grace live is foreclosed on, Virgil’s idea of the right thing to do is to shut down the house auction by threatening the auctioneer.

Pellegrino, a native of Los Angeles, has an enormous list of feature and TV credits. His films include THE BIG LEBOWSKI, CAPOTE, and MULHOLLAND DRIVE. On TV and streaming, he has played Rita’s ex-husband Paul on DEXTER, the savior-like Jacob on LOST, vampire leader Bishop on the U.S. version of BEING HUMAN, post-apocalyptic survivor Jeremy Baker on REVOLUTION, Lucifer himself on SUPERNATURAL and, most recently, a concerned father on 13 REASONS WHY.

ASSIGNMENT X: How did you become involved in AMERICAN RUST?

MARK PELLEGRINO: Dan Futterman asked me to be a part of it. I’ve known Dan for a little while. He directed CAPOTE, which I had a part in, and he was an actor, way back when – I don’t think he acts anymore – we did a [1993] Steven Spielberg[-produced] pilot, THE CLASS OF ’61, about the Civil War and the class at West Point in 1861. He was the main star of that show, from what I remember, and it was a cast of thousands, but nine hundred and ninety-nine of them became major stars – Andre Braugher, Laura Linney, Clive Owen, Josh Lucas. And the show was the first time that Spielberg and [cinematographer] Janusz Kaminsky got together, and it’s been a d.p./director team that has spanned the ages now. So, it was a great little piece, and that’s where I first met Dan.

AX: You’ve played some super-antagonistic people, including real-life killer Dick Hickock in CAPOTE. Where is Virgil, would you say, on that scale of antagonism and actually trying to be liked?

PELLEGRINO: [laughs] I feel like the real antagonists of this situation [in AMERICAN RUST], as you follow all of these people, life is happening to them, and they are just trying to deal, and get through it. Even though there’s a guy dealing fentanyl in the town, I feel like it’s really the world itself that seems to be the main antagonist.

Virgil is just a guy who likes to have fun. His life is not about serious stuff. I think when anything serious happens, he runs in the other direction. He might be an antagonist by accident, and by virtue of the fact that he might try to protect what he considers his, maybe very much like Paul becoming the antagonist in DEXTER, because he’s trying to protect his family from this outsider. I can’t quite tell where Virgil lies on the antagonistic scale, but he’s certainly in a love triangle with his wife and Del Harris, and certainly feels a competition with Del, who may be a threat, because Del’s actually a nice guy, and a man of his word, and these things make Virgil uncomfortable. He’s not really that type of guy. So, those are antagonistic qualities, but I’m not sure how far they’re going to go. 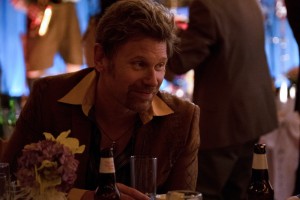 AX: Does Virgil have any kind of a double standard with his own open playing around and his wife having an affair with Del? Like, “It’s okay for me to do this, but it’s not okay for you to do this,” or it’s like, “Well, I’m doing this, so I guess I can’t say anything about you doing this, too”?

PELLEGRINO: I think most people are like, “I can do it, you can’t.” I think Virgil’s a little bit different. I think there’s probably jealousy there, because I think he really loves Grace on a certain level, but I also think he knows the lay of the land. He’s practical, and he knows that she’s not going to sit at home waiting for him. So, I think there’s a certain competitive jealousy, a certain sense that, oh, there’s another guy in the room. But it’s not like MAD MEN, [in which] Don Draper gets mad at his wives for flirting with men, when he was banging everybody in town. I don’t think Virgil’s like that at all. He’s less of a hypocrite. He is what he is – what you see is what you get.

AX: You have a scene in AMERICAN RUST where Grace walks in on Virgil and another woman, and Virgil runs out onto the porch in his underwear to try to stop Grace from driving away. Was that outdoor scene uncomfortable from either a modesty or just a physical “It’s cold out here” standpoint?

PELLEGRINO: I don’t remember it being too bad. It was a little chilly, but you’re focused on other things, so it doesn’t really disturb you. In BEING HUMAN, we had to do a three-page scene in a driving snowstorm, but we’re vampires, so we’re not wearing coats, in Montreal, in the winter. So, if you can imagine that – that was a horror show [laughs]. 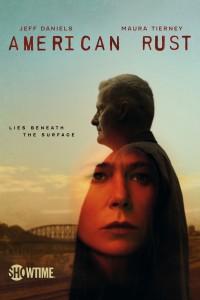 [The porch scene was] uncomfortable because I’m fifty-six, and I can’t exercise the way I used to be able to because of certain issues that I have. But I’m not uncomfortable with my body being seen in front of people. I’m a little self-conscious, because I’m not the muscle man I used to be, but that’s about it. If anything, I would hope it lends a little comic relief to the rather tense circumstances.

Because in that moment, Grace is losing her house and everything, and catches me in the act. There is some stuff that they cut out, which I thought would have been really cool to see, which would have been even more comic relief, which I think you need in a show as serious as this. People’s dreams are being derailed, and people are being taken off-course, and led down a path that seems disastrous. Every once in a while, you want to have a laugh or two.

AX: Were there any moments where you surprised yourself in playing Virgil, where something came out of you that you hadn’t been expecting?

PELLEGRINO: Yeah. But I don’t know that any of that makes it into the [final cut]. In the scene where I come out in my underwear, we shot the end of it first. So, we shot me coming out of the house, and then several weeks later, we shot the stuff on the inside, which was in set that they’d built in the courthouse there that they’re in.

Danny [Futterman] came up to [the performer] playing the girl I was sleeping with, and said, “Can you say something really Pittsburgh-y, something that only somebody in Pittsburgh might say?” And so, I run out, and I’m trying to win Grace over, [the other woman is] saying from the balcony there that she’s on, “Virgil, I can make some breakfast. You want some dippy eggs?”

My response came out different every time. We did it multiple times. But the response is how it landed in the moment, while I’m trying to reconcile with my wife in a way [laughs], this person is intruding with the dippy eggs. My response, which wouldn’t necessarily sound funny now, is, I had a whole thing with her about the dippy eggs. It wasn’t distracting, it was just like, “Are you f***ing kidding me?” type of thing as I’m going back to get my clothes on and get my rifle and all that crap to go save the day. But it was a funny exchange that I thought leavened the bread a little bit. 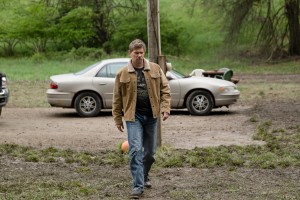 AX: So, you were not expecting how you were going to play that moment …

PELLEGRINO: Not expecting it, because it was new, and it came out of what she did, and how she did it, and yeah, that was unexpected. And at some other time, I think, later on, there were scenes with Jeff, where things that happened that I didn’t expect. And when your emotions surprise you, that’s always a great feeling.

AX: Where are you shooting AMERICAN RUST?

PELLEGRINO: Pittsburgh. I think that particular scene might have been somewhere in Braddock.

AX: Are you doing any kind of a Pennsylvania accent for Virgil?

PELLEGRINO: There might be a little sneaking in there, but not intentionally.

AX: How is working with Jeff Daniels and Maura Tierney?

PELLEGRINO: It’s just like going to class. It’s like going to acting school every day. Maura is so authentic. Everything she does comes straight from her heart. There’s no difference [between] her behind the camera talking, and her in front of the camera talking. That’s a very rare gift to have. She doesn’t do anything that’s not genuine. I love that about her.

And Jeff is a consummate artist, complex, and I feel like a mix of intellectual and gut, something similar to what I found in working with Jeff Bridges [in THE BIG LEBOWSKI], where there’s a consciousness and a clearness about what he’s doing, an intelligence behind what he’s doing. It’s not all instinct, but it’s instinct, too. So, I get to sit and watch him work, and listen, and remind myself that, “Oh, yeah, that’s what you have to do when you’re doing it right.” So, it’s really great working with him.