Based on the series of worldwide best-selling novels by Anthony Horowitz (an executive producer on the series), ALEX RIDER follows the title character, played by Otto Farrant, a sixteen-year-old student who is recruited by an offshoot of England’s MI-6 (the British equivalent of the CIA) to act as a spy for them.

In Season 2, it would seem that Alex’s work for the government is concluded. This doesn’t stop him from investigating how an explosion that almost killed a journalist is related to an extremely popular videogame.

Alex lives in London with his American guardian, Jack, played by Ronke Adekoluejo. He also spends a lot of time with his dedicated best friend and schoolmate Tom Harris, played by Brenock O’Connor. While both Jack and Tom know Alex’s life, they are both much more directly involved in helping him during Season 2.

Adekoluejo (when asked, she relates that her name is pronounced RON-kay Ah-deh-ka-LOO-eh-jo) is actually English, though she plays an American in ALEX RIDER. Her previous credits include DOCTOR WHO and the films READY PLAYER ONE, CHRISTOPHER ROBIN, and BEEN SO LONG.

O’Connor (first name pronounced BRENN-ock), who is also British, played Olly on GAME OF THRONES. His other credits include ANOTHER MOTHER’S SON, LIVING THE DREAM, and THE SPLIT. Additionally, O’Connor is a singer/musician.

Speaking from separate locations, O’Connor and Adekoluejo join up for an exclusive video discussion of their work on ALEX RIDER.

ASSIGNMENT X: When both of you joined ALEX RIDER in Season 1, did you realize your roles were going to be quite this large? 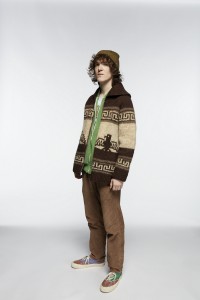 BRENOCK O’CONNOR: We didn’t know it was going to come again, really. It was one of those things where I signed on for one [season], and we hoped that it goes again, and we hoped that we get to do the thing that we love with people that we love spending time with. And to be asked back, and to be asked to do more, and get more involved with spy stuff, is a joy. But no, nothing’s ever taken as a given in this industry, because the job’s not yours, and the job isn’t out until it’s fully out wherever you’re releasing it, really. You can always end up on the cutting room floor. So, to be as involved as we are is a blessing.

AX: I understand that there was an audition with both of you and Otto Farrant, where you were all on couches together, and the producers decided at that moment that the three of you were all the right three people for your parts. Were you aware of that at the time, that you were clicking like that, or did you just find out about that later that you were perceived that way?

RONKE ADEKOLUEJO: We knew that we had a connection with each other that was very authentic and spontaneous in the same way. However, that whole day was so – I wouldn’t even say stressful, it was more surreal.

ADEKOLUEJO: And then, right at the end of the day, they put us together, and we all had to trot into this room with so many people [laughs], and then they were basically like, “So, you three, have a little chat.” So, we were like, “Okay.” So, we were talking to each other. And I just remember laughing and laughing. And in my head, I was like, “Even if I don’t get this part, I really hope I see these boys again, because they are just vibesy. These are my people right here.” I think we all found out individually that we had got the gig as well. I found out by myself.

O’CONNOR: Yeah. I got the phone call.

ADEKOLUEJO: I was like, “I wonder who it’s going to be?” So, when it was Bren and Otto, I was just like … [laughs] Everyone was amazing, but obviously, these two were the best. 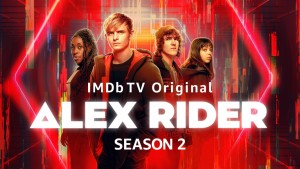 ADEKOLUEJO: Jack’s American in the books, yeah. I always go and create the character, so I have the clues that are given to me in the book, but also, I was like, “Okay, Ronke, who is Jack as a Black woman, where is she from in America, what made her leave America, what is she looking for in the U.K.?” All of those kinds of things. And that helps define who she is in terms of this world. Because she has been displaced from her home to create a new home here [in London], and all of that’s just exciting when it comes to building back story and creating memories for characters. You can just make up so much, and America’s such an amazing place, that I’m just like, “Great, where’s she from? Chicago.” [laughs]

AX: For both of you, were you familiar with the ALEX RIDER books before the series came along, or did you start reading the books when you got the auditions, or …?

O’CONNOR: I’ve been a fan of the books for years. I read them in my English lessons when I was nine years old. So, like any private reading time, I was sat reading [ALEX RIDER novels] EAGLE STRIKE or SKELETON KEY or anything like that. So, yeah, when the audition came through, I was like, “Nah, this is far too large. This is a ridiculous tie to my childhood that is just too poetically perfect, that is obviously going to pass me by.” And it didn’t. So, to be a part of it, I was like, “I’ve been a fan of this for twelve years now.” It’s lovely to be any kind of part in telling this story that sparked such joy in me as a kid.

ADEKOLUEJO: It’s full circle, isn’t it? My little brother actually was so in love with the books, so he’s always been the person I kind of have to go and check in with to make sure he co-signs it, because in all honesty, my little brother’s the driving force for me in a lot of things, but definitely in doing AELX RIDER to the best of my ability. It’s for my little brother, and all the people I know that are like my little brother, who have a connection to this book in that way. And I’ve got to make them proud first.

AX: Had you played an American before?

AX: It’s very good. And Tom is a big fan of video games and samurai films, and wants to be a filmmaker. Did you have to learn how to do anything in order to play the part, like how to fall into a canal, or look like you’re operating a video camera?

O’CONNOR: Just a little bit of film work, and I watched a lot of samurai films for the first series, so that I knew what I was talking about. But aside from that, it was very much a case of, Tom is your average boy at school, so I’m quite good at being that, because I was that for a long, long time. So, yeah, it’s just nice to be able to relax into a role, rather than prep intensely. 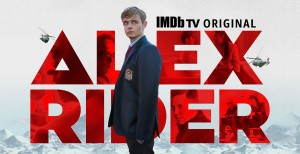 AX: What do you think Tom and Jack’s attitude is towards each other? Do they see each other like, big sister/little brother, friend’s mom/son’s friend, fellow protectors of Alex …?

ADEKOLUEJO: I’d say that definitely Jack is very, very fond of Tom. And they both have a shorthand with each other. So, I would say it was a sibling-ish, older sister relationship, as opposed to my best friend’s mum kind of thing, because that leaves room for Tom to be himself around her, and I don’t know about you, Bren, but I always feel like Tom is Tom when Jack’s around. He’s never like, “Ooh, the adult’s in the room,” he’s just like, “Yeah, there’s Jack.” [laughs]

O’CONNOR: Yeah, absolutely. It’s very similar to the relationship me and my sister have. My sister is twenty years older than me, we never grew up in the same house, but she lived around the corner. So, she was like my babysitter when I was a kid, and then just became like an older friend who would look out for me in a protective way, but also not be able to specifically tell me not to do something, but guide me in the right way of doing what I probably should have done in the first place. And that is exactly what Tom needs, especially with all of the madness that’s going on in Alex’s world. He needs that little bit of someone stronger and older, that he can look to and go, “You’re here with me, right? I’m not dealing with this stuff on my own?” And I think that, in a strange way, not to speak for you, Ronks, but Jack is also completely alone in dealing with this mad world that Alex is in that, having Tom there, even though he’s sixteen, is like, we see each other, and we’re going to help this boy through.