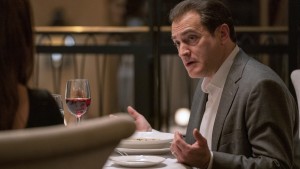 YOUR HONOR is now in the midst of its ten-episode run Sunday nights on Showtime. Based on the Israeli series KVODO, and developed for U.S. television by Peter Moffat, YOUR HONOR sets up a conflict wherein New Orleans judge Michael Desiato (Bryan Cranston) is desperately trying to cover up the fact that his college-student son Adam (Hunter Doohan) was involved in a fatal hit-and run accident.

Michael Stulhbarg plays Jimmy Baxter, the mob boss who is the father of Adam’s accidental victim. While another youth has been framed for the crime, Jimmy rightly suspects he doesn’t know everything about what happened to his son.

Stuhlbarg, born in Long Beach, California, was nominated for a Golden Globe for his leading role in the 2009 film A SERIOUS MAN and for an Emmy for his supporting performance in the 2018 miniseries THE LOOMING TOWER. Stulhbarg’s other notable work includes playing Shirley Jackson’s real-life husband, professor Stanley Hyman in this year’s SHIRLEY, New York Times editor Abe Rosenthal in THE POST, THE SHAPE OF WATER, DOCTOR STRANGE, and a host of Broadway productions.

In an exclusive Zoom conversation, Stuhlbarg talks about playing a loving parent who is also a brutal criminal leader.

AX: Were you actively looking for a role that combined both, as Jimmy Baxter does, or did YOUR HONOR as a whole appeal to you, or how did you come to be involved?

STUHLBARG: As far as I know, it was Peter [Moffat]’s idea to bring me into this. I spoke with him over the phone, and he told me all the elements of who this man was most likely going to be, and I just jumped in. It seemed to me that he was a well-rounded fella, and that he had an amazing set of accomplishments, combined with this coda, which suggested that he was a part of one of the most vicious families in New Orleans. And I thought, “Okay, that’s interesting. How is one going to balance those two things?” And I had seen THE NIGHT OF, and I went back and watched the original series that that was based on, CRIMINAL JUSTICE [created by Moffat for U.K. television], and thoroughly enjoyed it, and Peter was just lovely, and really excited and passionate about the project, so I just took a leap of faith, and it was a really wonderful opportunity for me.

AX: You had previously played real-life mobster Arnold Rothstein in BOARDWALK EMPIRE, which was set in Atlantic City in the 1920s. Are there any similarities between Jimmy and Arnold, or are the periods so different …? 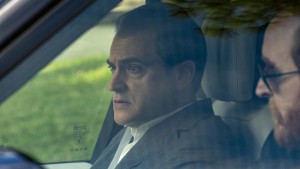 STUHLBARG: The periods are so different, the men are so different. Jimmy Baxter was born and raised in Scotland, until the age of nine, and then his mother took he and his siblings, and moved to the United States, ended up in New Orleans, and through hard work and grit made a tremendous life for themselves. The Baxters own several restaurants, and a couple of hotels, and is one of the foremost purveyors of oysters in town. So, there is very much an above-board element to what Jimmy does, and how he made his way in the world.

As opposed to Arnold, who is a completely different fella, who learned different things, and grew up in another part of the United States. Those differences made a huge difference to me, because if someone is described as a “mob boss,” it’s kind of elusive, because we never really see that during the course of this. We see other things, and we see things hinted to, but we may not be privy to those, and that’s one of the things that I love about Peter’s writing, is that it’s subtle. But as actors, it’s our responsibility to take all that information, and to try to utilize that to help tell the story that’s in front of us. I’m hoping that eventually we’ll get to a point where we will get to explore those different aspects of who he is. We’ll see.

STUHLBARG: No, he’s not meant to. That was also one of Peter’s thoughts, is that there are elements of who he is in how he speaks, but I think the idea that we had was, he scrubbed much of the Scotsman out of his being when he arrived in Louisiana, because the kids that he found himself surrounded by as a nine-year-old were making fun of him and his dialect, so he tried to become as much of the environment that he could. However, working in the restaurant business, even as a young man – he started from the ground up as a busboy and learned the trade that way, at least, that’s how we imagined it, so that he would adopt the elements of the clientele that he would meet, and work with eventually, and be an absolutely self-made man, from the ground up.

STUHLBARG: Exactly. Kids who transfer from one place to another and have to fit in can do so with amazing ease and grace and resilience, and I think Jimmy was one of those, who had a natural gift for adapting to his environment. There are elements that we get to see of who he used to be.

AX: Apart from maybe the first ten, fifteen minutes of YOUR HONOR, Jimmy spends the whole show grieving the death of a child, which is one of the most devastating things that can happen to a person …

AX: Is it hard for you to sustain that kind of emotional pain? Is that exciting as an actor? How is it dealing with that over ten episodes? 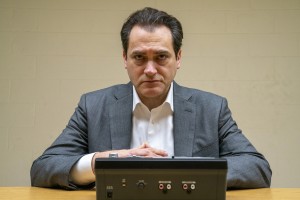 STUHLBARG: Well, it’s a wonderful challenge, to put yourself in a character’s shoes who is going through, most likely, one of the worst times in his life. It doesn’t start well with him. And he finds his way – he finds a direction, and a place to put his attentions. He has some riddles to solve, and he goes about solving those riddles doggedly. So, actually, it’s quite active in that sense. We see glimpses of what initially happens. And then we see him become a detective, in a way, with his right-hand man, Frankie [played by Tony Curran], and they go about trying to track down what exactly happened. So, that’s kind of thrilling, honestly.

It’s funny, because the audience gets the brunt of these things. I remember doing LONG DAY’S JOURNEY INTO NIGHT, which was a three-and-a-half-, four-hour-long play, and the audience gets the brunt of it, where the characters are going through so much, and you think how difficult that might be to sustain. However, they’re the ones purging it, and letting it out, whereas the audience has to take it all in. So, in this instance, it’s being quite active, which is great. 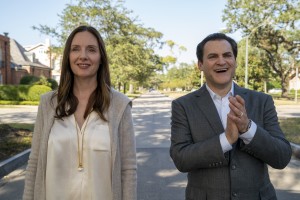 AX: Jimmy Baxter is fictional, but you’ve also played a number of real people like Arnold Rothstein, and Edward G. Robinson in TRUMBO [which starred YOUR HONOR lead Cranston in the title role] and Abe Rosenthal in THE POST. Is there a difference for you between playing somebody who’s a historical figure, and somebody whose origins are fictional?

STUHLBARG: Yes, there is. When I am given someone who really lived to play, whether they’re alive or not, I feel a great responsibility to honor who they were, what they believed in, and try to put myself into the structure of their lives, as the amount of research that I’m able to do in the time that I have, and the pieces that I’m able to put together. I did as much as I could in the instances of, say, Edward G. Robinson and Abe Rosenthal, Andy Hertzfeld from the Steve Jobs film, and Paul Marshall from PAWN SACRIFICE. Those were all real folks, and I really feel an obligation, and a responsibility, to the lives they lived, and to stay true within the structure of their lives.

Whereas with this guy, Jimmy Baxter, he’s fictional from the ground up, and there are certainly all kinds of people who influence who he might be. One of the wonderful aspects of getting to work with Peter was his absolute openness to work with me, and we would create his back story together. He would give me some time every week, if not more so, in the beginning, and we would just hammer out what the history was. So, we’ve got a whole bible of the background, what happened, the other characters in his life that we may get to see. But in some ways, we are creating that order, and that structure, so that I can function within the rules that we set up ourselves. 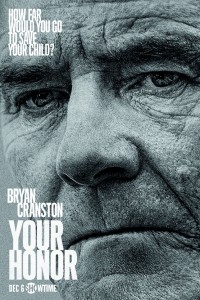 AX: And what would you most like people to know about YOUR HONOR as a viewing experience?

STUHLBARG: We had an amazing time making it. The pandemic hit us at around March 12. I think we started the third block. We were in Episodes 7, 8, and 9. We had shot some of those scenes, but around March 12, we stopped. So, it was six months at least, I think, until we started up again. And that affected all of us, and I’ll be curious to see myself what those later episodes look like, because we all went through a lot, getting it done, coming back, starting over again in some ways, and picking up where we left off.

I think each of these characters has a tremendous back story, with well-rounded backgrounds. So, you could follow any of them along their journeys, and get really taken up by what it is each of them are going through. I also find that Peter’s writing is very unique, in that he not only gives us the dialogue, but he has these enormous passages to alert the actors as to what it is they’re going through, as they are experiencing what they’re experiencing in any particular scene, large passages, paragraphs about the physical movement, sometimes microscopic, in terms of the turn of a head, or a glance, or something like that. It just makes me want to try to fill in all those directions. You don’t need to know that as a viewer [laughs], but I’m really excited myself to see how they were able to capture what it was we were given to do. Just come and watch and go on the ride.