WHAT WE DO IN THE SHADOWS: Actor Matt Berry on Season 2 – Exclusive Interview 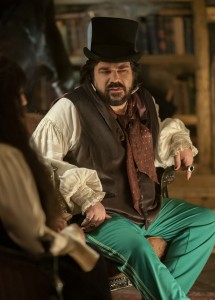 WHAT WE DO IN THE SHADOWS, now in its second season on Wednesday nights on FX (and thereafter on FX on Hulu), has been picked up for a third season. The series, developed for television by Jemaine Clement, based on the film of the same name that he wrote with Taika Waititi, deals with a houseful of vampires un-living together on Staten Island.

Matt Berry plays the vampire Laszlo, who has been married for several hundred years now to his maker Nadja, portrayed by Natasia Demetriou. The couple are joint tenants with Nandor the Relentless (Kayvan Novak), who was a conqueror in his mortal days, energy vampire Colin Robinson (Mark Proksch), and Nandor’s human familiar Guillermo (Harvey Guillen).

Berry, a writer as well as an actor, has created and starred in the British series SNUFF BOX, TOAST OF LONDON, and YEAR OF THE RABBIT. Some of the Englishman’s other performance credits include GARTH MARENGHI’S DARKPLACE, THE MIGTHY BOOSH, THE IT CROWD, HOUSE OF FOOLS, and voices on the animated DISENCHANTMENT and MOOMINVALLEY.

ASSIGNMENT X: Were you surprised or just gratified when WHAT WE DO IN THE SHADOWS got a second season?

MATT BERRY: I was pleased for the show. If it gets a second season, that’s probably an indication that it didn’t fail as an idea, to sort of follow the film, either work or not work. So I was relieved that that was the case.

AX: Why does Laszlo speak in such a declarative way? When most people talk that way, they’re lying. Laszlo isn’t lying, but …

BERRY: I can’t answer. That isn’t the intention, and I don’t hear it like that. He’s very serious about everything he says in that house, I would say. He could be getting excited, and the way that he expresses himself there would be to speed things up, or to raise his voice in some way. But I don’t think he’s lying. There’s a way that the upper class would have spoken in the times when he’s from, which is very deliberate.

AX: So he wants to make sure that the peasants understand him, and he sort of views most of the people around him as the peasants?

BERRY: Anyone that’s not himself is pretty much lower, yeah.

AX: But he doesn’t view Nadja that way …

BERRY: No, he has the utmost respect for her. But anyone else in the house, he’s not interested in. The same with Nadja.

AX: So Laszlo and Nadja they just put up with Nandor … 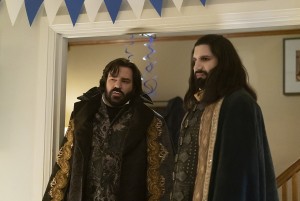 Matt Berry as Laszlo, Kayvan Novak as Nandor in WHAT WE DO IN SHADOWS – Season 2 – “Brain Scramblies” | ©2020 FX/Russ Martin

AX: It’s amazing they haven’t thrown Colin out yet.

AX: Whenever Laszlo is going to turn into a bat, he actually says “Bat.” Do you do any sort of physical leaning into it, or do you just say “Bat” and they cut? I have the feeling that you’re doing something physical, but that may just be the magic of editing.

BERRY: Yeah. You say “Bat” and then you kind of rise of off the street or wherever you are. Whatever I do is what I do on the screen, whatever that is.

AX: Can you tease any big Season 2 developments for Laszlo?

BERRY: I have to leave the house and I have to change my name, because I’ve done something despicable. And so I’m not outwardly a vampire for an episode. So that’s a lot of fun. Then there’s Elvis. He pops up. He was made into a vampire in the ‘70s. He’s in the basement. That was a lot of fun being with him. And we [Laszlo and Nadja] have a music room, which was a lot of fun, where you will hear us performing songs that we’ve written over the last three, four hundred years. And they’re in different styles. So that’s a new element to these characters.

BERRY: No. It’s never challenging. I view those sorts of things as just fun. You get to do something off, which is always good fun and enjoyable.

BERRY: I enjoy it all. It’s an ensemble thing, so it’s not about me, it’s about everyone, and everyone being so funny. That’s how I view it.

AX: And you have two other shows …

BERRY: Yeah. There’s TOAST OF LONDON, which I wrote, and YEAR OF THE RABBIT, I wrote, both of which are on IFC.

AX: Can you say what YEAR OF THE RABBIT and TOAST OF LONDON are about?

BERRY: TOAST is about an actor. And YEAR OF THE RABBIT is a Victorian piece about a Victorian detective.

AX: Is it more a detective story, or more of a character story? 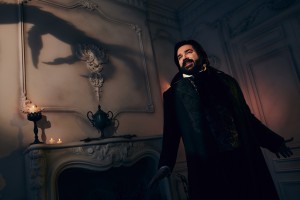 BERRY: Well, it’s a lot easier to play something that someone else wrote, because you haven’t got to worry about every other aspect and every other detail, because it’s not your show. You just do what you can within what it is that you’ve got to do, and just leave everything to everyone else.

AX: And what would you most like people to know about WHAT WE DO IN THE SHADOWS Season 2?

BERRY: Oh, God. That it’s much the same as 1. The spoilers are out now – I’ve got an episode with Mark Hamill, which I’m very excited about.

AX: Are you a STAR WARS fan?

BERRY: Yeah. So that was a big deal. I think it’s going to be good.

This interview was conducted during FX’s portion of the Winter 2020 Television Critics Association (TCA) press tour.

Article Source: Assignment X
Article: Exclusive Interview with WHAT WE DO IN SHADOWS actor Matt Berry on Season 2