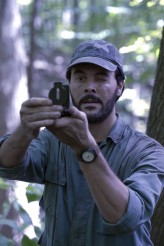 The actor discusses his role on the Spectrum series 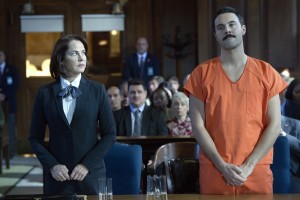 MANHUNT: DEADLY GAMES, now available in its entirety on Spectrum on Demand and Spectrum streaming, dramatizes the real-life FBI search for serial bomber Eric Rudolph. While some of the characters are composites, Rudolph is portrayed by Jack Huston.

Huston, grandson of filmmaker John Huston, is no stranger to playing real people. He portrayed poet Gerard Malanga in FACTORY GIRL, Jack Kerouac in KILL YOUR DARLINGS, King Charles II in the miniseries THE GREAT FIRE, and Robert Kennedy in THE IRISHMAN. Huston’s fictional characters include Jack Harrow in BOARDWALK EMPIRE and Felix Babineau in MR. MERCEDES. Later this year, Huston will be seen in the fourth season of FARGO.

At a Q&A session for MANHUNT: DEADLY GAMES, Huston is asked how he manages to play a character as dark as Eric Rudolph so convincingly.

Huston replies that he takes the question as a compliment. “He was an interesting character to approach because he is reprehensibly terrible. He was a narcissist, he was a complete sociopath. And as [MANHUNT creator/executive producer] Andrew [Sodroski] and [director/executive producer] Michael [Dinner] were saying, we have an opportunity in this, through ten hours, to really delve into these characters. Eric was a fascinating person to get into because he was a master manipulator. He was an actor. Her performed and managed to sort everything to his own benefit. And he would contradict and claim he was doing it for the anti-abortion, the anti-gay [movement], the Army of God. When you really got down to it, after the research that I did, because there’s actually zero recording or video footage of Eric Rudolph, but there’s a lot of writing, most of it his own, you find out that it was all an act. He turned on his own family. And he’d been planning it for years. So this is someone who was just bad at his core.

“The main thing is, I didn’t want to glorify him, because a lot of these programs and films and shows can glorify these killers, and there was nothing to glorify in this. He was truly bad, and he murdered and acted without a conscience. It’s very important for us to explain that he became a celebrity because he evaded the FBI in the Nantahala Wilderness for five years. That became a story unto itself, and people all started supporting him. They started thinking he was this sort of hero, out doing God’s work, and that wasn’t the case. So hopefully, we are going to really get to experience the truth of this. And a lot of people still don’t even know that Richard Jewell [wrongly accused of bombing the Olympics, played in MANHUNT by Cameron Britton] wasn’t responsible for this, and that’s the saddest part. It was Eric Rudolph. There’s no question. Eric Rudolph. That’s the end of it.”

When the Q&A ends, Huston answers a few more queries. 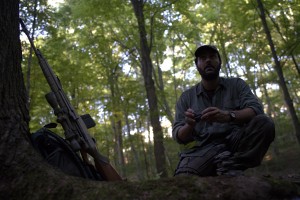 ASSIGNMENT X: In all the research you did for MANHUNT, did you have to learn anything about bomb construction, wilderness survival …?

JACK HUSTON: Survival, I would say. We were doing a lot of that. Like I said, I didn’t want to in any way glorify Eric Rudolph, but it was remarkable that the man had existed, survived, in the Nantahala Wilderness, evading the FBI, for five years. That on its own is one of the most incredible feats. And he wrote his memoirs, I think it’s called LINES OF DRIFT: THE MEMOIRS OF A MILITANT – this is really funny, I was going online, trying to order his book. It took me from one place to another, and suddenly I [thought] I was looking too much into Eric Rudolph, a bomber. I thought suddenly the FBI might wonder about this. So I got all freaked out, and I had to go to Andrew and say, “Can you get me the book, because I don’t want to do it online anymore, because I’m going to get tapped as a possible militant, as someone to watch.” So he got it for me, and [the book] was amazing, because a lot of it is very self-serving, but it gave a lot of insight into his survival, how he got through it. And we spent a lot of time in the woods, doing this, in the caves, working. I was in those woods on and off for four months.

AX: Did you shoot in the actual Nantahala Wilderness?

AX: Were the caves real caves?

HUSTON: Yeah, we were all over the place. It was amazing, it was beautiful. It’s stunning, the woods that we were in. We really got to develop this character, because like I said, there was only the [written material], but one had the interpretation. I got to interpret and take artistic license and really turn him into a three-dimensional character. 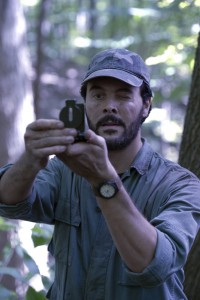 AX: What would you most like people to know about MANHUNT: DEADLY GAMES?

HUSTON: I think it’s a fascinating story. I’m from England, so I actually didn’t know the entire story. I knew of the Olympic Park bombings – I didn’t actually know what happened. And when I read it, it was like, you can’t write this stuff. And this is the opportunity to really tell everybody’s story. And it wasn’t a short thing. [For the wrongly-accused Richard Jewell], this was death by media, it was a trial by media. Richard Jewell was down, and actually, [the record might never have been corrected] if it wasn’t for the [ATF agent] Earl Embry character, who Arliss [Howard] plays, and Jack Brennan [the FBI agent played by Gethin Anthony], and all these people who came together and actually stuck with it and actually were the people who brought down Eric Rudolph, finally, after the longest manhunt, I believe in history.

This interview was conducted during Spectrum’s portion of the Winter 2020 Television Critics Association (TCA) press tour.