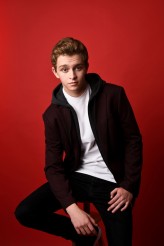 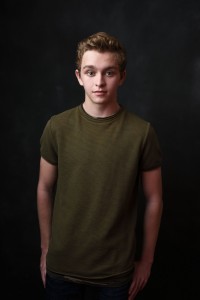 In the eight-part miniseries LITTLE FIRES EVERYWHERE, now streaming in its entirety on Hulu, Gavin Lewis plays sixteen-year-old Michael “Moody” Richardson, second son of Elena (Reese Witherspoon, also an executive producer on the series) and Bill (Joshua Jackson). Based on the best-selling novel by Celeste Ng and set in the suburb of Shaker Heights, Ohio, LITTLE FIRES EVERYWHERE chronicles what happens when tightly-wound, well-intentioned Elena invites the enigmatic Mia Warren (Kerry Washington) to work for her as a kind of glorified housekeeper. Moody, one of the Richardsons’ four children, falls for Mia’s daughter Pearl (Lexi Underwood), which adds another layer to an already complicated situation.

Lewis previously starred as Prince Emil in the Netflix comedy series PRINCE OF PEORIA. Other credits include the series ROSWELL, NEW MEXICO and a role as triplets on NCIS: LOS ANGELES, as well as the features MAXIMUM RIDE, ODIOUS, and IN SEARCHING.

In a phone interview, Lewis talks about playing a withdrawn youth who is trying to reach out.

ASSIGNMENT X: How would you describe Moody’s feelings about his family before Mia and Pearl come into the situation?

GAVIN LEWIS: I think Moody sees the expectations his mom has set up with the two older siblings [played by Lexi Richardson and Jordan Elsass], and she’s sort of biased towards them, and seeing that the expectations are higher, he has sort of pulled back. And I think a similar thing has happened as far as his social life. At school, I think he had a period, probably, when he was younger, of trying to reach out to the other kids, and it never quite went as well as it did for his older siblings. So I think Moody sort of decided he was an introverted, kept-to-himself kind of guy.

AX: So “Moody” is actually a descriptive nickname for the character.

AX: Does Moody like Pearl because of what she represents, or because of who she is, or is he able to make that distinction?

LEWIS: I think he likes Pearl, because Pearl is unlike anybody he’s ever met in the town. She is more into artwork and poetry than anybody he’s ever met, and he connects with her really quick. She is into the same sort of music and art that he is, so he really opens up to her pretty fast in a way that he hasn’t with anyone else in a long time.

AX: Did you read the book LITTLE FIRES EVERYWHERE?

LEWIS: I did. I read it during the audition process, because I felt it for me would be helpful to get all that information from such a good, descriptive book. Because when you’re auditioning, the audition sides [script pages] only give you so much, you can only draw so much from the character, and it is very helpful. It was about a week from my first audition to booking, and in that week, I read the book, and it was super-helpful, especially to get broad strokes of the character, his relationships with his family. 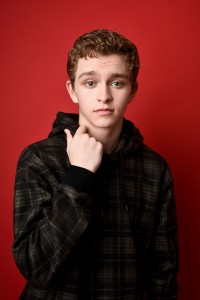 AX: Were there any significant differences for you between the book and script versions of Moody?

LEWIS: I don’t know if there are any big differences. I would say the biggest is that I think they tried to flesh him out a little bit more in the show. I think Liz Tigelaar [who developed LITTLE FIRES EVERYWHERE for television] did an amazing job of this. She would do extra, for us, bring the small, lightly-touched-on aspects of the book to life in a really cool way. Things that were a couple sentences in the book would be turned into a whole back story for us. I feel like she did an amazing job of fleshing out my character.

AX: Where did you shoot LITTLE FIRES EVERYWHERE?

LEWIS: At the studio called The Lot.

AX: Did you visit Ohio? What kind of research did you do for the character?

LEWIS: I’ve never been to Ohio, but I did do a lot of research for the character. Especially, I realized, being born in 2003, I knew practically nothing about the ‘90s [laughs]. So I did do a bunch. I watched TV shows, I researched the fashion, I researched, the culture, music. I spent quite a lot of time on that.

AX: Did you find aspects of the ‘90s that interested you, or did you feel like, “Thank God I missed that”?

LEWIS: [laughs] I’m a fan of the ‘90s. I think I’m not too upset I missed the fashion trends, but they were normal at the time. And the music, actually, really resonated with me, I found a bunch of bands that I had heard on the radio. The biggest one is Nirvana. Moody is a big fan of Nirvana, and it turns out, so am I.

AX: Is there anything you do differently to play somebody who’s existing in the ‘90s than you do to play a contemporary person?

LEWIS: As far as personality traits, not necessarily. I mean, every character is different, just as far as the research of family, and their likes and dislikes. I think that the difference is just figuring out like music tastes, and it was really just researching what he enjoyed from the ‘90s. I think the mentality of a withdrawn teenager is similar. I would like to say, I had an awesome, big, baggy ‘90s wardrobe, which I loved, and it was probably the most comfortable costume I ever wore on a set. I am Type 1 diabetic, so that costuming helped me hide my medical devices that wouldn’t have existed at the time, and just that everyone on set was super-helpful with all of that, and super-understanding.

AX: To jump in the Wayback Machine, when and why did you know you wanted to be an actor?

LEWIS: Both my parents are in theater, and so I grew up around it my whole life. I wanted nothing to do with it for a long time. I think I was maybe overexposed [laughs]. And then, through a friend of my mom’s, one of her first old theater students decided to shift over into film, and he was making his first feature film, and it happened to have a role that fit my description, so he reached out to my mom. “Hey, I know your son kind of would fit this, does he want to audition?” And I auditioned, and I happened to get it by some crazy cause [laughs], and after doing that, it was different enough from theater that I was like, “Hey, this is something I want to do.” And I don’t know what came over me, but I think little nine-year-old me approached the lead in the movie, and I asked how I would be able to get representation in L.A. And he set me up with his old manager, and it kind of just snowballed from there. 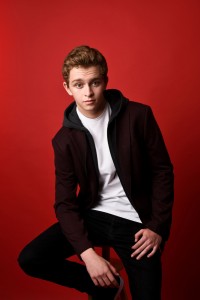 AX: Did you family move to L.A., or do you commute, or how does that work?

LEWIS: Me and my mom come out to L.A. We went back and forth for a long time, but we have an apartment out here. My dad unfortunately still works in Utah. But we are mostly out here now.

AX: Before LITTLE FIRES EVERYWHERE, you were the lead in the comedy series PRINCE OF PEORIA. How was that?

LEWIS: It was cool going from PRINCE OF PEORIA to our show, because it’s such a big difference in character. On PRINCE, I played this big, excited sort of a play on a British dialect, very enthusiastic about the world, kid’s show, to this, where Moody is such a thoughtful, pulled-back character. It was really great.

AX: How is working with Reese Witherspoon and Joshua Jackson, who play your parents in LITTLE FIRES EVERYWHERE?

LEWIS: It’s incredible. Reese – it’s so cool working with somebody who’s got so much information on their character that when you’re in a scene with them, you just get to play. It becomes fun, because they’re changing their reads, and giving you tons and tons to work with, and then everything is different I didn’t have a ton with Josh. We had a bunch of dinner scenes together, but that was about it. What always was cool for me was how quickly he snapped into character from joking around. He’s a super-funny guy. We’d all be telling jokes. Right up until they called “Action!”, he’d still be making people laugh, and then flip immediately into character, and it was really cool.

AX: Did you do any socializing with the other actors playing your siblings in order to foster those onscreen relationships?

LEWIS: We all got along really well. We met in the audition process, of course, the chemistry reads. And then they scheduled for us a couple of Disneyland days. Before filming really got going, we all went to Disneyland together, which was super-duper fun. And then in between scenes on set, everyone had something different in their trailers, so we would go back to Megan [Stott, who plays youngest Richardson child Izzy]’s trailer, and play video games, or we would come back to mine, to listen to music. 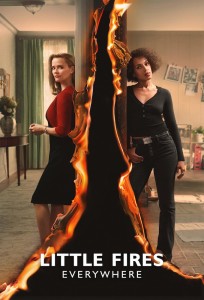 AX: What do you think of the overall themes of LITTLE FIRES EVERYWHERE, of the culture clash?

AX: Does Moody get any more woke as LITTLE FIRES EVERYWHERE goes on, or does he get more defensive?

LEWIS: I think he sort of realizes that he might be more like his mom than he wants to be.

AX: And what would you most like people to know about LITTLE FIRES EVERYWHERE?

LEWIS: It sounds clichéd, but I hope people take it as, don’t judge a book by its cover. I’ve heard that phrase so many times in my life, but it really is true, and I think that is one of the major themes from the show.