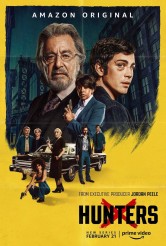 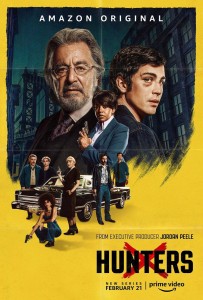 HUNTERS is currently streaming its ten-episode first season on Amazon Prime, and renewed for a second season. Created by David Weil and set in the 1970s, this story casts a band of Holocaust survivors, led by Al Pacino’s Meyer Offerman, who come together to violently take down Nazis who have settled in the U.S. The tone is quasi-superhero comic book, mixed with actual history.

Weil and his fellow HUNTERS executive producer Nikki Toscano (also a producer/writer on series including DETROIT 1-8-7, REVENGE, BATES MOTEL, MATADOR, SHADES OF BLUE, and 24: LEGACY) are together at the HUNTERS Q&A panel organized by Amazon Prime for the Winter 2020 Television Critics Association (TCA) press tour. After the panel, Weil and Toscano remain for one-on-one follow-up discussion. This interview consists of comments made on the panel and in the ensuing conversation.

Weil says HUNTERS is partially inspired by things told to him by his grandmother, a Holocaust survivor. “Through her story, I learned so many stories, of the Holocaust, of the war, stories of courage, stories of perpetration. She would tell me stories about her time during the war. And as a young kid, five, six years old, those stories felt like the stuff of comic books and superheroes.  It became this mosaic of, “Oh, there’s this brilliant story about this survivor, who survived by stealing potato peelings in Auschwitz.” Or a story about a Nazi officer who perpetrated war crimes, and then after the war, escaped to South America.

“As I got older, I struggled with that feeling of birthright. What was my responsibility now to continue her story? So many Holocaust survivors are no longer with us, and that community is growing smaller and smaller by the year.”

Is HUNTERS is set in the ‘70s because it’s an era Weil particularly likes, or so that characters like Pacino’s Offerman are still young enough to be physically active? “The latter,” Weil replies. “For me, this was a love letter to my grandmother. It was a quest to don that vigilante cape in the face of rising anti-Semitism in the world, racism, xenophobia. It was a desire to shed light on hidden crimes and hidden truths. And it was also a desire to create a sense of catharsis and wish fulfillment for a young Jewish kid growing up on Long Island, who wanted to see superheroes who looked like him on screen, who engaged with the perpetration against the Jewish people in a way that felt unique and special, in a way that we reclaimed power.”

HUNTERS is also intended to honor both those who had been murdered, and those who had survived, Weil adds. “I was trying with HUNTERS to create this portrait of all these different little stories of the six million Jews who died, the eleven million in total people who were killed [by the Nazis]. Also, the fourteen million survivors of these Nazi death camps.”

Some of HUNTERS is based on historical fact, but which parts? Toscano says, “I think that it’s inspired by true events, in that we’re dealing with the Holocaust, and there were Nazis living in America in the wake of the war.”

Weil elaborates, “There were also groups hunting these down, notable Nazi hunters – Simon Wiesenthal, Serge and Beate Klarsfeld, Mossad agents who went down to South America. But this piece revolves around a covert operation in which hundreds, if not thousands, of Nazi war criminals were brought into the United States. And if you watch the series, you’ll see how that true conspiracy was unraveled.”

However, the organized violent vigilantes fighting Nazis in the U.S. is less historically accurate. “That is part of the invention,” Weil explains. “To our knowledge, they [in fact] hunted these people [Nazis] through the courts and legal action. This is a piece about wish fulfillment, and wondering what if there was this band of secret Nazi hunters who were eliminating these people.”

Toscano says she and Weil had not worked together before. “They just said that they needed someone to come in to help David execute his beautiful vision for the show. We spoke a lot – I think he met with a lot of people, but we just clicked.”

How does their collaboration work? “Well,” Toscano replies, “I think that the basic thing is that we do everything together. I was brought onto the show because of the amount of experience that I had, and David and I had the same vision for the show. Every facet of the show, from breaking story in the room to writing scripts to rewriting scripts to dealing with production issues, David and I did together.”

Did Toscano learn anything about the Holocaust working on HUNTERS that was new to her? “Absolutely. I had to become a student of the Holocaust myself. I think that it was important for me, because I’m not Jewish, to have understood the majority of the material out there, and to also recognize that this is a show that’s not just about anti-Semitism, it’s about white supremacy, it’s about a number of groups that have been marginalized. One of the biggest things that attracted me to the project was this very diverse group of the Hunters, who are not just Holocaust survivors. We have a Japanese-American, we have an African-American woman, and the idea that these Hunters have all been persecuted, but not necessarily persecuted in the same way. When I was twenty-five, I fostered and adopted a twelve-year-old African-American boy, and one of the biggest struggles that me and my ex-husband endured while raising him was trying to find the ability to put ourselves in his shoes, something that was incredibly difficult to do. And I think that the Hunters in this group might allow our audience the opportunity to do that very thing.”

Weil says that the style of HUNTERS came to him organically. “When I was a young kid hearing these stories that my grandmother would tell me, the only thing I could really relate it to were comic books and superheroes. It was these stories of great good but grand evil, the horrors of which are really difficult to even try and understand. So that became the lens through which I began to see these stories of the Holocaust.

“As I got older and became a student of the Holocaust, those poppy colors of my grandmother’s stories began to desaturate. I began to see the stark, depraved realness of what happened. And I think you’ll see the show chose these different tonal lines that explores the wish fulfillment, comic book superhero of it all, and then the sobering reverential portrayal of life in the camps.”

Although HUNTERS is set in the past, Weil notes that it is meant to be timely. “This show is an allegorical tale in many ways, and the purpose is to draw the parallels between the ‘30s and ‘40s in Europe, the ‘70s in New York, and especially what’s going on today. We’re facing an epidemic of anti-Semitism, racism, xenophobia, the likes of which we haven’t seen in decades. And so this show is really a question. It’s what do you do? And for this show about a group of vigilantes who try and reclaim the power, the question that the show poses is, if you hunt monsters, do you risk becoming a monster yourself? I think that’s a very timely idea and question that we should all be asking ourselves in this day and age.”

Toscano says that, while the series may query some of the Hunters’ tactics, HUNTERS does not deal in false equivalencies. “We’re not making an attempt to humanize Nazis, but I do think that there is a spectrum of evil that we’re dealing with. Some of the Nazis that we face are over to one extreme, where there are other Nazis that have various explanations for their behavior – ‘I was following orders,’ ‘I was a kid,’ ad nauseam. These arguments of course do not land on our Hunters.”

Weil adds, “And I think it’s also, ‘Never again,’ we say, right? For this to never happen again, it’s important to identify that [the Nazis] were human beings, so that we don’t try and portray them as caricatures. That was really important in the writing and the portrayal of these roles, so that we can begin to understand, why did they do these horrible things? And in a sense, how can we prevent that from ever happening again?”

What would Toscano most like people to know about HUNTERS? “That it’s an empowering story of what it means to be ‘other,’ and turning [those others] into superheroes.”