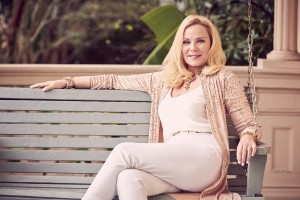 FILTHY RICH, premiering Monday September 21 on Fox, is a dark comedy/drama series about a mega-church ministry. When Sunshine Network founder Eugene Monreaux (Gerald McRaney) dies in a plane crash, his widow Margaret (Kim Cattrall) is left to not only hold their empire together, but also to deal with the revelation that Eugene has several previously unknown offspring, all hoping for an inheritance.

John Norris is an executive producer on FILTHY RICH, alongside series creator Tate Taylor; the pair’s previous projects include the Oscar-winning film THE HELP. Norris talks about FILTHY RICH’s origins, his background in visual effects, why he thinks the time is right for a show like this, and more.

JOHN NORRIS: I sort of straddle the line between both of them. I walk the line on the practical and on the creative side, so Tate Taylor and I are producing partners, as well as partners in life.

AX: With GREENLEAF just now coming to a close on OWN, THE RIGHTEOUS GEMSTONES going into a second season on HBO, and now FILTHY RICH on Fox, do you feel like there’s something in the zeitgeist that is calling for shows about mega-churches at the moment?

NORRIS: I do. I think there is definitely a cultural shift in the way people think about conservatives, and I really feel like the leadership tends to alienate conservatives from the rest of the media. The media loves to make fun of them, so I feel like we can take a center stance, and really enjoy both parts of it. We get to be with the conservatives, and make fun of everybody at the same time. So it’s really the process and the characters that are going to make it enjoyable.

AX: You started out as a visual effects artist …

NORRIS: I have a lot of background in visual effects, worked on a lot of Marvel movies, a lot of superhero movies, and monster movies. So I’m completely familiar with that. 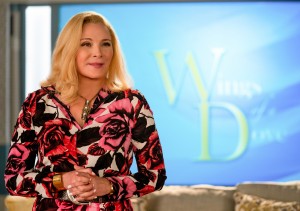 AX: Are you working on the visual effects for FILTHY RICH at all?

NORRIS: No, I haven’t done that in years, but that was one of the things I did when I was growing up. I worked for Stan Winston briefly, and then I started a visual effects company with my high school buddy, who also worked for Stan Winston. Our first movie right out of the gate was I AM LEGEND, and from that moment on, we were using technology that’s usually used for 3D modeling and building characters, and that turned into designing and building assets. And suddenly, with I AM LEGEND, if you remember, they had practical characters, and then nobody liked the practical characters, so they hired every visual effects house in the entire planet to roto those out and then create digital. And so from that moment on, studios put a lot of attention on pre-vis, and visually realizing digitally before you actually practically shot them.

But since then, producing has been great. Tate and I made THE HELP together, and we fell in love during that, and we’ve been together ever since. So he is really the creative drive behind it, and I’m a little bit more of a left-brain type of person, but we both live in the South. We spend part of our time in New Orleans, and in Natchez, Mississippi, and then the other part is in New York. So we get a little bit of both worlds, back and forth. It’s a great contrast.

AX: Are you shooting FILTHY RICH in New Orleans?

AX: Since you and Tate Taylor worked together on THE HELP, which he wrote and directed, and he’s the creator on FILTHY RICH, is there any of the character sensibility from THE HELP in this?

NORRIS: From THE HELP? Absolutely. There are four things Tate really looks for when developing and getting behind a project – character, story, pathos, and then a sense of importance. And this has all of that. It has great characters, it’s really funny, and in places dark, but it also feels important, because we’re living in a time when there is such a divide between not only rich and poor, but also conservative and what we would consider [liberal]. Ideologically, we straddle the line as well. We don’t feel there’s as significant of a difference, outside of fiscal responsibility, between conservatives and what the media portrays as liberals. There’s a lot of common ground. It’s just that we like to exacerbate the differences. There’s a lot of humor in that. And I think the more we talk about it, and the more we laugh about it, the easier it is to build a bridge towards understanding. So for us, that is an important component of the show. It sounds like I’m standing on a soapbox, and a little polished, but it really is genuinely our hope. 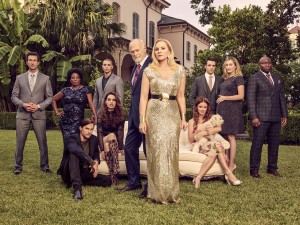 AX: Were either of you raised in evangelical Christianity?

NORRIS: We both were. Tate was raised in Jackson, Mississippi, and I was raised in Bulworth, Texas, so we both come from relatively conservative families, with Southern religious backgrounds. So we both had our own struggles coming to terms with who we were as individuals, but also as creative people, and then trying to [reconcile] that with building a life and a career and a family in the South. And that’s not even taking faith into consideration. Once you throw the concept of faith in there, it becomes a much more complex equation. So all of those things, we think, lead to a really rich tapestry for storytelling. And of course, funny.

AX: Do you have any preacher characters who are smaller, non-mega-church ministers?

NORRIS: In the show? Of course.

AX: Are they more heroic or more comedic? Or are they comedically heroic?

NORRIS: They’re both, exactly. There are going to be character arcs throughout. We’ve got one main preacher, but there are several. It’s an evangelical family, so there will be a lot of that.

AX: How did you arrive at Kim Cattrall to play your lead, Margaret Monreaux?

NORRIS: I have been in love with Kim since John Carpenter’s BIG TROUBLE IN LITTLE CHINA, with Kurt Russell. I had a poster of her on my wall. She’s absolutely fantastic, and she’s a real actor’s actor, and fell into the rhythm of this character so easily, from the first time that we met and started discussing it. Tate’s been in love with her forever, so the chance to work with her on this has been fantastic.

AX: On the one hand, Gerald McRaney seems to be another one of your leads, and on the other hand, his character dies right away. Does he just show up in flashbacks, or …?

NORRIS: No, there’s a whole arc for Gerald, and I don’t know how much I’m allowed to give away, but suffice to say, it isn’t going to be what you expect. It’s going to be incredibly unexpected, I hope, and twisty. But he’s also a genuinely sweet man who’s obviously from the South.

NORRIS: Well, Tate and I are really committed to bringing film economy to the Southwest region. This is what we’ve been dedicated to. We’ve planted our flag in Church Hill and Natchez, Mississippi. We’ve got a film studio, there’s Alcorn University, which is an HBCU there, so we have been looking at projects and developing things that are specifically designed to work in that region. There’s something called Film Natchez, which is a nonprofit, that helps build an economic foundation for education. I know it sounds like I’m on a soapbox, but the truth is, this Southern culture in many ways, has been neglected for years, for generations. So part of our goal is to bring attention to the poverty and the lack of education that exists in the South, and by living there, and actually being part of those communities, so we develop things that are a part of that.

It’s not a coincidence that the mortality rate for [pregnant] women in the South is five times what it is in the North. Our feeling is that, how can we abandon the very people who need the help the most? And by being in the South, we change hearts, we change minds, we build economy, we build education. Our goal is to stay put. I also respect any other person’s right to pull up and move, but we’re really concerned and focused on providing jobs, making sure there are people that have a means to make a living, and keep families together. Our biggest goal is really to provide an economic base for people who want to do what we do, which is tell stories. It’s much less political than it is really economically based, but we do intend on stay.

We’re [adapting] a book called RIDDANCE, like “good riddance,” and the book is set in Massachusetts, but we’re going to turn it into a Southern Gothic story, about a group of young people who stutter, and they’re abandoned by their families, so they go to this sort of halfway house. And it’s a fantastic, sprawling Gothic story. We shot BREAKING NEWS IN YUBA COUNTY with Allison Janney and Juliette Lewis and Mila Kunis and Wanda Sykes in Natchez, where we’ve sort of planted our flag. So we have a lot of business and work in that Southern region, so that’s where we’re focused.

AX: And what would you most like people to know about FILTHY RICH?

NORRIS: That it’s filthy and rich [laughs]. No, it’s a wonderful, sprawling Southern story of greed and faith and family, and what it means to be a conservative in this day and age, the contrast between media and a private life. It’s just a very exciting, fun story, with a great cast. So I hope everybody decides to watch.