The actor talks a wide variety of projects 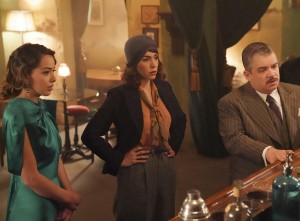 Meanwhile, A.P. BIO, the comedy series in which Oswalt plays cheerful high school principal Ralph Durbin, is moving from NBC to the network’s new Peacock streaming platform for its third season. Ralph is blissfully unaware of how much biology teacher Jack Griffin (Glenn Howerton) detests him.

Oswalt is also back on MARVEL’S AGENTS OF SHIELD for that show’s seventh and final season on Wednesday nights. The SHIELD team, including a Life Model Decoy (i.e., sophisticated android) version of Agent Coulson (Clark Gregg) have time-jumped to 1931 to prevent the malevolent Chronicoms from destroying reality as we know it. Oswalt has previously appeared on AGENTS OF SHIELD as the six identical Koenig brothers. In 1931, we meet him as patriarch Ernest Hazard Koenig, a bootlegger who seems to have no idea about what his family will become.

This interview is derived from comments Oswalt made at two separate panels at the Television Critics Association (TCA) press tour, as well as a post-panel discussion with a small group of reporters, in which he discusses his enthusiasm for STAR WARS.

ASSIGNMENT X: Do you know the secret of the Koenig family? Because there’s clearly a secret involved.

PATTON OSWALT: I have a theory. And I’ve heard other people’s theories, and they’re all correct. 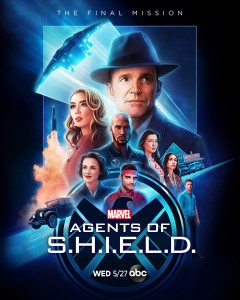 AX: You’ve talked about being a big STAR WARS fan. In fact, you played the bartender in STAR WARS CANTINA KARAOKE, and you’ve said you had a strong reaction to seeing STAR WARS: EPISODE VII – THE FORCE AWAKENS. Can you share that?

OSWALT: For me, [director/co-writer/producer] J.J. Abrams recreated the experience of seeing STAR WARS in 1977. Velocity and fun and excitement. It was great. And that guy [Abrams] could not have had more stuff on his back. I could not have been more nervous for him. I wanted him to succeed.

AX: You got to work with THE FORCE AWAKENS lead John Boyega in the dramatic thriller THE CIRCLE. How was that?

OSWALT: I had one brief scene, but we never got to interact, but I got to talk to him for a bit. I was such a fanboy from ATTACK THE BLOCK [an earlier Boyega film about aliens invading working-class London] that I tried not to bother him too much. He’s such a movie star. But it was fun to get to hang out with him.

AX: You also had some interesting thoughts on how DOWNTON ABBEY might have ended, and now who knows, if they keep going with the movies, it might. Can you talk about that?

OSWALT: I had this weird thing where they fast-forward to England in the 1950s, and the last member of that family will still be alive, watching the last of that kind of Victorian structure collapse. It would be kind of cool to flash forward to the ‘50s or ‘60s, and put that whole world in that context. Because you are looking at a sealed snow globe of an age that’s dead. You may as well be watching GAME OF THRONES when you’re watching DOWNTON ABBEY as far as what that world is, because that world is gone. But I would never presume to the creator how to end his shows.

AX: Do you think about alternate storylines and endings when you’re watching TV?

OSWALT: If you’re watching something really good, of course that’s going to spark thoughts of, “Okay, well, what was that?” That’s what really good writing is. Look at all the fan theories about STAR WARS, about DEADWOOD, about THE WIRE, all the fan fiction and fill-in stuff. You should do that. I would hate to watch something and go, “Well, I guess that was the story they told me, and I don’t need to think about it anymore.” I’m always thinking in those terms. It’s really fun. 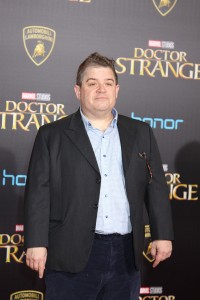 AX: Do you know if there is Agent Koenig fanfic?

OSWALT: If there is, I haven’t gone searching for it. I’m trying to avoid it.

AX: What appealed to you, as a project and in terms of your character, with A.P. BIO?

OSWALT: What I loved about [A.P. BIO creator Michael Patrick O’Brien]’s scripts was, there was a lot of subtle stuff about wanting to be the cool guy, but the minute you’re in authority, no matter how cool you are, you are no longer the cool guy. You are the authority figure. So there’s a lot of really great human riffs in there about trying to maintain a level of coolness while telling people what and what not to do, and that made it very easy to play, because I understand that, wanting to not look dumb and awkward, and yet you’re in a position where you can only look dumb and awkward. So that was really fun to get to play. And getting to play off of all the [other series regulars] just made it even easier, because all they get to do is torment me, and it’s great.

I also love how Mike adds the element that [Oswald’s character Ralph, who is] Jack’s nemesis – and you’ll notice this – is lethally oblivious to Jack’s anger at him, which in real life, that’s often how your nemesis [provokes you]. It’s usually one side, because Ralph is almost like, “I don’t know, fine with me,” like they don’t know and they don’t care, and it drives Jack insane, because Ralph does not understand how much Jack hates him.

AX: As far as your stand-up comedy career and your acting career go, do you think your popularity in one area is in any way driving the other?

OSWALT: I think that what’s driving my employability is – I don’t know why this is, and I hope I don’t jinx it – I seem to be getting employed on a lot of shows that I’m a huge fan of. So I’m so enthusiastic to get to be there. It always feels like they’ve hired a radio contest winner. “I get to do a role on VEEP.” So I guess word gets around that it’s really, I guess, fun to work with me, for lack of a better word. And then also, I’m on a lot of shows that get streamed on Netflix. And the kind of shows I do are the kind of shows that get shared and networked about and talked about, and have very, very rabid fan bases. So both things build on each other very, very nicely, and I’m very, very fortunate that I get to do that.

AX: Does any of your comedy refer to any of your acting work, or do you think that would be too self-referential?

OSWALT: I think the only time so far that I’ve ever referred to my acting work was when I was promoting RATATOUILLE [Oswalt voiced the title character, a rat who longs to be a chef, in the animated family film], and I got into a very uncomfortable situation. Because I’m always so cynical, and a lot of times, when you’re promoting cartoons, you just have to be very upbeat and optimistic, and I realized how uncomfortable I was with that, so that was really strange for me. But otherwise, I try to avoid that.

AX: Do you ever have concerns about people being offended by any of your comedy material?

OSWALT: As offended as people are getting, and as nervy as they’re getting, it just means that what you’re doing means something. So I say, let it be sloppy and turbulent and argumentative. I have no problem with that. I love that.

AX: You’ve written some op-ed pieces that use humor to make a serious point. Is there some humor that’s better when it’s written and not spoken, or is all humor better spoken?

OSWALT: Well, no. I think there’s some humor – especially if you read a lot of the classic ONION articles, they work better if you’re hearing it more in your head, rather than having someone describe it. Like some of Nicole Mullen’s stuff on THOUGHT CATALOG, it works because it’s in the very specific voice of a character, or Jack Handey’s stuff works so perfectly when it’s written. So I think, always find the right medium for whatever it is, and that’s how it’s going to work the best. 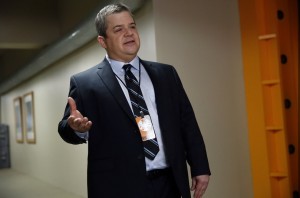 AX: How do you keep up with current humor?

OSWALT: It’s actually pretty easy to keep up with today’s humor, because I like watching comedy. So going to open mics and watching young comedians and following them on Twitter, it’s great. How horrible would it be if all the young comedians who were coming up were terrible? It would make me so soft and lazy. It wouldn’t be exciting. So the fact that everyone that’s coming up right now is so much funnier than I was at their age is fantastic. So it’s fun to keep up with. I don’t think of it as a chore.

AX: When you’re deciding to do a project, do you take into consideration if it’s going to run on Netflix, or broadcast, or wherever?

OSWALT: I don’t think in those terms. I think if you’re thinking in terms of, “Where will this get streamed down the road?”, it’s going to affect your performance. But if you get on a really good show, like JUSTIFIED or AGENTS OF SHIELD, of course, those shows really pay off in huge, binge-y arc viewing. So yeah, I would say that a show that I’m enthusiastic about, that ups the chances of it being on Netflix, because Netflix really rewards huge, giant viewings like that.

AX: Specifically in terms of your relationship with Netflix regarding your comedy specials …

OSWALT: They’ve been very fortunate in that [Netflix has] seen years of other networks doing specials. They’ve seen how they’ve succeeded and how they’ve failed. So they’re already starting at such an advantage of, “Okay. We know what worked. We know how to stay out of the performer’s way, so that they do the best show.” What’s also kind of weird, because Netflix is streaming and you can just put stuff in your queue and watch it, they’ve recreated the experience of fans of stand-up comedy that used to buy albums and tapes and tell their friends, “Oh, this one bit he does, you’ve got to see that.” So it’s very easy to then email and Tweet and Facebook each other, “Oh, make sure to check this one part out.” So it’s almost like you have a cassette tape/LP library, but it’s in digital form on your TV, as far as stand-up is concerned.

Here is the best thing a special gives you. You’ve got an hour of material out there that someone can watch on TV, and it’s your best stuff, and they make it look great, and it’s fantastic. Then you have the opportunity to go on the road, now that people have seen your special, and do a whole new hour. If people had watched you, or heard an album of an hour’s material, and then they go pay to see you, and you give them a whole new hour, you have fans for life, and that’s the opportunity. And there are some people that fumble the opportunity. And other people go, “Okay. I’ve got this special out. I am going to churn out another hour of amazing stuff, and really build a permanent fan base.” So that is the best opportunity that a special gives you, because I think comedy fans have really evolved since the time of Johnny Carson. A lot of times, people would go on CARSON, and they’d go on the road, and [the audience would] want to see what they saw on CARSON. Now they’ve become way more sophisticated, and they want to see a brand-new hour. And that is the best thing about it.