THE HANDMAID’S TALE: Joseph Fiennes on playing one of the architects of Gilead – Exclusive Interview

The actor talks about his character 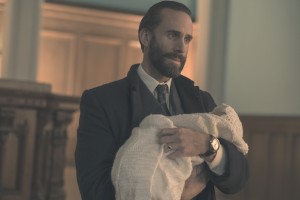 THE HANDMAID’S TALE, the multi-Emmy-winning adaptation of Margaret Atwood’s novel, now has three seasons streaming on Hulu, and has been renewed for a fourth. In the near future of THE HANDMAID’S TALE, human fertility is on the wane, and much of the United States has been overtaken by the totalitarian fundamentalist government of Gilead. In Gilead, women have virtually no rights. Wives have status, but if they are infertile (and most are), the household brings in a “handmaid” to be impregnated by the husband in a ceremony that involves both of the women.

THE HANDMAID’S TALE is seen largely through the eyes of June, aka Offred (played by Emmy winner Elisabeth Moss), who is forced to be a handmaid to Commander Fred Waterford, played by Joseph Fiennes, and his wife Serena Joy (played by Yvonne Strahovski).

We find out in flashbacks that Fred and Serena Joy were two of the principal architects of Gilead, though both have since shown varying degrees of ambivalence about what they’ve wrought.

Fiennes, Emmy-nominated for his work in the first season of THE HANDMAID’S TALE, has famously fought to preserve his character’s ambiguity. Originally, it was written that Fred would rape Serena Joy while the couple was visiting non-Gilead-controlled Canada. Fiennes successfully argued to the creative staff that, while Fred was dark and manipulative, he would not be that abusive to his wife; the rape scene was shelved.

Here, Fiennes discusses some fundamentals of his role and THE HANDMAID’S TALE as a whole.

ASSIGNMENT X: You and Yvonne Strahovski play the Commander and Serena Joy as younger people than they seem to be in Atwood’s novel …

JOSEPH FIENNES: That’s important, because I think the elephant in the room, or the ghost, is that they can’t have a baby. And procreation is so big in Gilead. So if you have someone that’s older, or the wife is in menopause and she’s past that, then it doesn’t land as powerfully [because they wouldn’t expect to be able to conceive in any case]. Babies are such a big thing. They’re a pressure on women today, even without it, such a horrible pressure. And so when the population is declining, I think it’s a very astute thing that they’re young. But in the book, there’s no age. He’s grey and balding, but he’s described as an aged football coach. “Grey” is the only thing. Well, I’m balding and going grey. So I’m thinking, actually, in the book, if you said he was fifty, you’d go, “Yeah, he’s fifty. Sixty, they’d be too old.” So I don’t think the casting’s too bad, on age. But I think it’s important that [Serena Joy is at an age where she] could have a baby, and she can’t have a baby. And I think when they’re making love, they’re not cardboard cutouts. They’re fallible, multifaceted human beings. They understand the complexities of what’s going on. But the ceremony is a metaphor for so much. It’s about abuse, it’s a rape. But doing it with his wife who can’t have a baby – they know what that means. But the mileage it gives us is that he starts to enjoy [sex with Offred] later on. And then he can’t abort later on. Because Offred says something, or doesn’t say something, and it throws him. So you see the power and how she discovers her power within a powerless situation. So it’s fascinating, the sexual politics, control – there’s a lot to take away from it.

AX: There are a lot of women directors, writers and producers on THE HANDMAID’S TALE, and the majority of the main cast is female. Is this a work environment you enjoy?

FIENNES: I love it. I adore it. Both my sisters are directors. My mum was a prolific writer and painter. I’m all for the female voice and psyche. I love it. It would be appalling if it wasn’t in my life. But in my work as an actor, I’ve met too few female directors. It’s brilliant to have this dynamic richly presented in our series. It’s important.

AX: As a TV series, THE HANDMAID’S TALE has a very particular storytelling style, switching back and forth between June/Offred’s point of view and a broader narrative depiction. Do you have any thoughts about that?

FIENNES: One has to at least take on board that any adaptation, by virtue [of what it is], has got to change something. It has to if it’s television. But I was amazed that in the book, what Atwood does so extraordinarily is, she has Offred in a narrative. And then she has her making an observation. And then we go a couple of pages with that observation. And then we come back to the narrative that we were previously involved in. And she never drops the ball. And it’s effortless, it’s beautifully woven. And I was thinking, “How are they going to build her observing and thinking and looking, and editing will be so hard …” And that to me was the success of the series, is the way that it continues the narrative. The fall is in the air, the energy is going, you [are part of it] with observing, thinking, looking, and then it goes back into the purge, the ceremony. So I love her looking – there’s a moment of her looking at herself. That’s something the book does, and we’ve got that.

FIENNES: You’ve got it. That’s it. How much? Offred questions how much. And I believe he’s not a cardboard cutout character, he’s multifaceted. He knows it, he’s swept up, he’s now wearing the mask. But the question is, how much is he becoming the mask that he’s chosen to wear? I think it’s in the book. I think it’s clear through Offred’s observations of him that she doesn’t trust him, and she questions whether he really does believe in it or not. And I’ve made the decision that he’s on the fence. He goes between belief and nonbelief.

I think again, what it goes back to, is procreation. Offred is the epitome of fertility. And I think subconsciously he’s attracted to that. He can’t have it with his wife. And also, that lack of fertility, which actually is not her fault, it’s the Commander’s fault, that brings the disconnect in their relationship.

AX: When you shot the impregnation ceremony scene, it’s obviously dead serious in the narrative, and it’s a horrible situation, but on the other hand, you’ve got three actors on set who are in some very unusual positions. Did you find some humor in the fact of, “Well, here’s three of us, all trying not to squish each other …”?

FIENNES: There’s always humor, rather like Offred has that humor, to get through the horror. Humor is a survival technique, as it is for us as actors in creepy circumstances. So we have the humor, but also, we’re there to deliver in seriousness what is an appalling abuse. So we’re cognizant of the complexities, but of course, I wouldn’t say there’s a levity, but we don’t allow the heaviness to bring us down.

AX: The book THE HANDMAID’S TALE has been forever timely since it was published back in 1981, but at least with what’s going on in America right now, it seems, if it didn’t exist, you’d have to invent it …

FIENNES: Yeah. I think what’s going on in America is scary, isn’t it? It’s really about fundamentalism and conditioning and how scary that is. We’re in the landscape of a different form of fundamentalism. Also power, abuse of power. I think anyone that says they don’t have to turn in their tax returns or can talk abusively about women or can mistrust the information of the FBI and CIA and rely on a hacker is questionable.