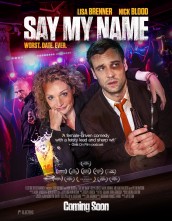 In SAY MY NAME (opening Friday), Lisa Brenner plays a woman with a very complicated personal history (and multiple names to go with it). She finds herself in an equally complicated situation when she visits an island off the Welsh coast and attempts a one-night stand with downtrodden local piano tuner Statton (Nick Blood). She’s offended when he can’t remember the name she gave him, but before she can storm out, a pair of thieves burst into the rented hotel room.

Brenner, who is also a producer on SAY MY NAME, previously produced the feature CHATTER. As an actor, Brenner’s film and TV credits include TURKS, the LIBRARIAN telefilms, THE TRIANGLE, THE PRICE OF HAPPINESS, CESAR CHAVEZ, and THE REMAINS. In this exclusive interview, Brenner talks about playing and producing for a character who turns out to be much more than meets the eye.

ASSIGNMENT X: How did you become involved in the project?

LISA BRENNER:  Years ago, my friend from Columbia, Jay Stern, and I decided we wanted to work together.  We thought it would be fun to create a project for me to act him and him to direct that was completely out of my wheelhouse of characters.  Something I would never be cast in.  So he brought me this project by his comedian friend, Deborah Francis-White.  I read it once and knew I had to produce it!

AX: Were you first attracted/involved as an actor or as a producer?

BRENNER:  Both.  Jay knew me as an actress first from the first play he directed in New York, which I was in, Shakespeare’s THE MERCHANT OF VENICE.  He always thought that I wasn’t getting the parts he thought I deserved.  Mostly guest starring roles, crying over someone or some thing.  So we decided to create this fun project together. 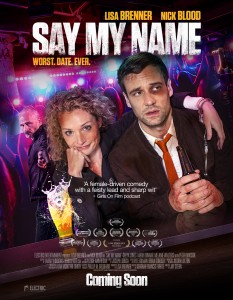 AX: Did you steer the script in any particular direction once you were involved?

BRENNER:  Absolutely!  At first it was mostly a screwball comedy.  I mean, laugh out loud funny and I loved that, but I kept asking the writer and director, “But why is she there?  Why is she in this tiny Welsh town? Let’s dig deeper.”  And that’s when the adoption story arose.  Without giving too much away of the plot, I wanted this tough, worldly woman to open her heart.  And she definitely does.

AX: Was it always set in Wales?

BRENNER:  It was not actually.  It was originally set on a British Isle and then it was rewritten to be set in Greece, where Jay Stern had work colleagues.  However after doing much research with tax incentives and crew availability, we decided on Wales, which I am still thrilled about. Wales itself is a magical place and has it’s own quirky charm that gives the movie an element I don’t believe we could’ve gotten anywhere else.  We were so lucky.

AX: How would you describe the genre?

BRENNER:  That’s an excellent question. I don’t think SAY  MY NAME is like any movie I’ve ever seen.  To me it’s a screwball, romantic comedy with a lot of heart and soul.

AX: How would you describe your approach to comedy in SAY MY NAME?

BRENNER:  I consider myself very naturally funny, which is a joke, by the way.  All of the comedy in the movie stems from real emotions, real people living in these very unbelievable circumstances.  For instance Mark Bonnar creates such a larger-than-life bad guy Dec, that everything out of his mouth is freakin’ hilarious.

AX: When do you think we start to see Mary/Carole/Yvette’s true self?

BRENNER:  Mary is constantly trying to hide who she is.  Whether it’s her sharp wit, her sarcasm, her multiple self-generated personalities, she doesn’t want to show her vulnerability.  Statton makes her literally confront her past and that’s when the facade breaks.

AX: When do you think she starts to actually warm to Statton?

BRENNER:  I think she’s incredibly attracted to him from the beginning — hence the, ahem, opening scene — but she needs him to show her that he can be as strong and powerful as she is.  To me, when he is singing in the bar, and is having his own rock star moment, and Mary sees this, I think it’s a turning point for her.  She sees he has the potential to be by her side.

AX: How was working with Nick Blood?

BRENNER:  He is amazing.  I love to tell people that in real life, Nick is more like Mary and I am more like Statton.  We had so much fun together switching places.  On our last day of shooting, our wrap party was that night. He needed to stop at the barber for a haircut.  I thought nothing of it, but when I saw him that night, he had his earrings back in, his hair shaved and he was back in his London accent.  I didn’t recognize him at first. He had so hidden who he actually was the whole shoot.  It blew us all away.  He is just so good.

AX: How was working with Jay Stern?

BRENNER:  Jay and I get along so well.  We always have.  He is such an artist, with such a calm, yet strong presence on set.  He loves actors and knows how to get the best performances out of everyone.  Our shoot together went so incredibly well, and with the micro budget we had, and doing it all in 18 days, I feel like it shouldn’t have.  And we are still close and talking to each other, which is a great thing.

AX: What was the most challenging aspect of making the film?

BRENNER:  Dealing with the lead actress. Ha ha.  But honestly, working with our executive producer Phil Goldfarb and Jay, they made the production side of things so easy.  For me, the hardest thing was bringing Mary to life, doing her justice, because she is just such a unique, multi-faceted woman.

AX: What was the most satisfying aspect of making the film?

BRENNER:  There are so many things, but hearing people laugh in the theater and then to hear them sniffle and cry is pretty awesome.  Also, getting to play a woman I would never be cast as, doing the things I got to do, was so much fun.  I got to stretch myself and challenge myself as an actor, which we are so rarely given the chance to do. And I know Awards shouldn’t mean anything, but to win Best Feature at The Cardiff International Film Festival, the wonderful city we made this little film in, filled me with more joy than anything

AX: What would you most like people to know about SAY MY NAME?

BRENNER:  This film is unlike any other movie and just expect to have so much fun seeing it.  The world is so tough right now and I want SAY MY NAME to bring audiences some escape from reality. It’s an 82 minute wild ride, that if I’m lucky, just may touch your heart and soul. 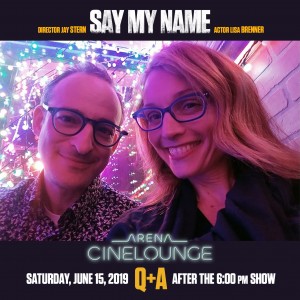